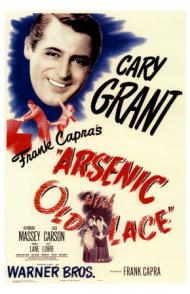 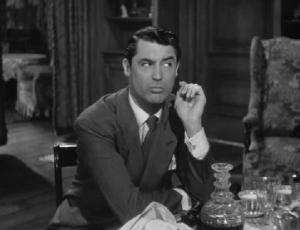 35 years before Monty Python was formed, Frank Capra directed Cary Grant in the Pythonesque dark comedy Arsenic and Old Lace. This surrealistic classic used many of the comedy conventions that the British troupe would twist even further in their day , and it did it before some of the Pythons were even born. Ahead of its time? Yes, but it is also infinitely of its time, and has stood the test of time to remain as funny today as anything Hollywood is producing now.

The very idea of two sweet old maiden aunts who take in lonely old men as boarders and then poison them to relieve the men of the burden of loneliness could have been taken straight out of a Python sketch. The fact that they also live with Teddy, who thinks he's Teddy Roosevelt and charges up the stairs as if they were San Juan Hill, only adds to that. Along with the tongue in cheek opening sub-titles and other surreal moments, this really could be a Python sketch stretched out to a full-length movie.

Cary Grant plays Mortimer Brewster, a nephew of the sweet little murderesses; he's a Drama Critic and confirmed bachelor (He's so confirmed that the book he's writing is entitled 'Mind Over Matrimony'). This is not only Grant's funniest performance in his long career, but also one of the funniest performances ever caught on film. What makes his performance so masterly is that essentially he plays the straight man in a house full of oddballs, yet it is his reactions and double takes that make you laugh. It's completely over the top of course, but that's what the part calls for and it works.

Not that Grant is the only one to get the laughs in this movie. The Aunts explanation of how they murder the old gentlemen is classic. After telling Mortimer how they add Arsenic, Strychnine, and Cyanide to Elderberry wine (because 'it makes tea taste bitter'), they proudly add that 'one of the gentlemen even found time to say how nice it tasted before he died.' Based on a Broadway play, almost the entire movie takes place in the Aunt's sitting room, with the zany cast members popping and charging in and out of it. With such a limited set and a running length of 2 hours, you might think it could get dull, but with such a talented cast, the crackling dialogue, and Capra's directing touch, the movie zips right along.

I don't really know if the Pythons were fans of this movie or if it influenced them at all. I do know however, that Python alum John Cleese named his character Archie Leach (Cary Grant's real name) in A Fish Called Wanda. In Wanda, Cleese plays a very Grant like character, and must have been inspired in part by this movie. Whether they were or not, Arsenic and Old Lace stands as a classic. 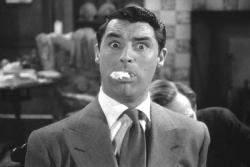 As Scott wrote, the set up is great. Two sweet old lady serial killers is the perfect arrangement for a dark comedy. These two old spinsters dote around their house acting like the kindest old grandma's you ever met. The scene where they admit to Mortimer that they are murderesses is the funniest in the movie. Grant's near speechless reaction to the news is hysterical.

On hand to add suspense is Mortimer's sadistic brother Jonathan. Everyone who sees him does a double take. His lone companion, Dr. Einstein, is a plastic surgeon whose latest work on Jonathan has him looking a bit too much like Frankenstein's Monster. In another good scene Jonathan gets bent out of shape when he finds out that his old Aunts have killed more people than he has.

But wait, there are more crazy characters. Scott mentioned the insane Teddy, who buries the victims in the basement where he thinks he is digging the Panama Canal. There is also the rookie cop who really wants to be a playwright. He explains his play to a tied up and gagged Mortimer as Jonathan sneaks up on him. His mom was a stripper. He has issues.

Grant pulls off a fairly amazing feat. With all of this insanity going on around him he manages to steal the movie. Grant often played the calm, cool figure in movies. It is no wonder that his best comedic work is when he plays someone who loses control of a situation. Check out Bringing Up Baby for another Grant comedy where his reactions are as important as the punchline. 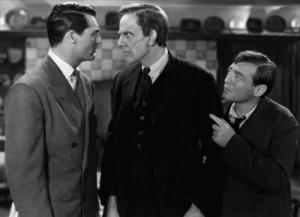 In a movie full of outrageously funny lines my favorite bit of dialogue is when the two Aunts have the following exchange about their nephew Teddy. Abby: 'Oh, do you remember, Martha, once a long time ago, we thought if he'd be George Washington, it might be a change for him, and we suggested it.' Martha: 'And do you know what happened? He just stayed under his bed for days and wouldn't be anybody.'

I always enjoy Peter Lorre doing a spoof of himself as the plastic surgeon (in the play Jonathan was played by Boris Karloff) and I agree that Cary Grant's inimitable mugging is classic, especially in the scene where he first discovers the body in the window seat.

Yes this movie is a laugh riot but I have always been a little disappointed with the ending. Partly because the first hour is so incredibly funny that it would have been nearly impossible to maintain that level of humor for the entire movie. But then in doing some research I came across a couple of interesting changes that were made when the script was adapted from the play. At the end when Mortimer finds out that he is not actually a Brewster and giddily exclaims to Elaine, 'I'm not really a Brewster, I'm a son of a sea cook!' Thanks to the Hays Code the line was changed. Originally Mortimer said, 'Darling, I'm a bastard!' And the final scene showing the two Aunts pouring a glass of elderberry wine for Mr. Witherspoon was edited out. As unfortunate as these changes are they do little to spoil the entertainment value of this subversively funny screen gem.