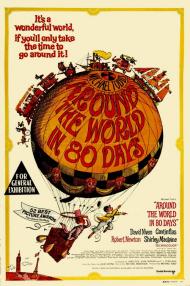 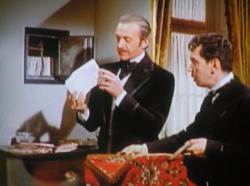 David Niven and Cantinflas in Around the World in 80 Days.

Around The World in 80 Days is the slowest paced race movie you are ever going to see. The cinematographer sure had fun filming all these scenes but it slows the plot down to a crawl. Do we really need to see so much background and color from each and every country Fogg visits? There are some moments in this film where nearly a half hour goes by where Niven has only a few lines.

Cantinflas steals the movie. As the man servant, he does all of the work. He does the bullfight that procures the boat. He saves the Indian princess. He could have done this trip without Fogg. Okay, he would need Fogg's money but Fogg certainly could not have done it without him.

The huge cast is somewhat fun to watch. All of the famous cameos come and go quickly. Still this very long movie is more of an event film than it is an entertaining one. Worth seeing, if you have never seen it, but once is definitely enough. 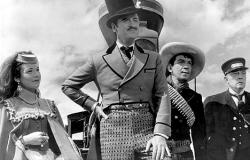 Shirley MacLaine, David Niven, Cantinflas and Buster Keaton in Around the World in 80 Days.

I disagree with Eric. On the contrary, one of the things that makes this a special movie are all the shots of the different countries visited by Phileas Fogg and Passepartout as they race around the globe. From London to France, then in a hot air balloon to Spain, then all points East, including the jungles of India (where they rescue a princess about to be sacrificed, played by Shirley MacLaine) and on to Hong Kong, then Japan, and from there to the United States, beginning at a saloon in San Francisco, followed by a train ride across the great plains and being attacked by Indians, finally from New York back to London, where (oops) Passepartout left the gas on, but fortunately Phileas Fogg wins his bet and is found innocent of robbing the Bank of England. Whew!

Phileas Fogg is such a great British character and David Niven plays him to perfection. Nothing ever riles this guy. He is a complete creature of habit, even insisting his bath water be an exact temperature. He takes everything he does quite seriously for, “An Englishman never jokes about a wager, sir." That might be true but as Eric pointed out it is his loyal manservant that gets them out of nearly every scrape, enabling them to successfully circumnavigate the Earth in the allotted 80 days.

One of the grandest screen epics ever made! 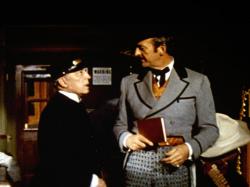 Buster Keaton and David Niven in Around the World in 80 Days.

Patrick, you're gushing about an old movie again. Yes, some of the scenes of exotic locales are beautiful and I'm sure in 1956 they seemed even more exotic than they do today, but Eric is correct. These scenes drag the movie down to a crawl, turning it into a travelogue more than a narrative. Edited down to under two hours and you'd possibly have an entertaining adventure tale.

The editors do a good job of making it look as if the stars visited every country that the movie passes through, although they did not. Their most used trick is to show a beautiful shot of the countryside and then cut back to a reaction shot of Cantinflas "looking" at it. It sounds simple, but it works and it allowed most of the film's story scenes to be shot on a soundstage.

David Niven does play the imperturbable, stiff upper lip Brit to perfection, but Eric's right again when he says that Cantinflas steals the movie. Not only is he charming and funny, but he, unlike Fogg, is in awe of the many countries they pass through, as epitomised by the scene on the train passing through India. While Fogg sits reading the London newspapers, Passepartout gazes out the window soaking in the wonder of it all.

Quite often with Cantinflas, I was reminded of a silent film star. He has several dialogue free scenes of humor, such as the bullfight or the scene where he reveals the scam behind the snake charmer. Charlie Chaplin once commented that Cantinflas was the best comedian alive and Cantinflas was often referred to as the "Charlie Chaplin of Mexico". In Latin American countries, he was given top billing on this film.

The many famous faces that pop-up along the journey are entertaining, even if, like the scenery, they rarely help the story along. The term "cameo appearance" was coined because of this movie and its many guest stars. My favorite star appearance has to be Buster Keaton's, who naturally turns up on a train. His small role is a part of the story, unlike many of the other cameos where you're taken out of the story momentarily as you say, "Hey, that's so and so."

Todd's gift for promotion and his many Hollywood connections turned this movie into a box office hit and won it the Academy Award for Best Picture. It was definitely one of the biggest "event" films of the 1950s, but the decade produced many smaller films that were much more entertaining and that have aged better. 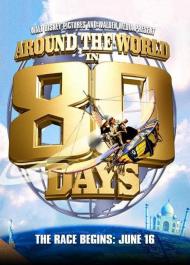