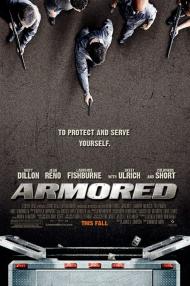 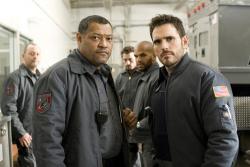 This must have been a fairly cheap movie to make. It features a small cast of B-list actors, just a few locations and obviously not very much was spent on the script.

Matt Dillon plays Mike, an armored car driver who decides to steal his load of cash with the help of a group of other guards and drivers from the same company. The rest of the group is played by, among others, Laurence Fishburne, Jean Reno and Skeet Ulrich. Recognizable faces, but they bring very little to their underwritten parts. Only Fishburne is given much distinctive personality.

Their plan to rob the trucks is flimsy and basically non-existent. After driving their trucks (they plan to rob two at the same time carrying more than $40 million) to an abandoned warehouse they plan to hide the money and then claim they were robbed by someone else. Just why they thought they would be believed is never explained or how they would start to spend millions of dollars without suspicion falling on them isn't bothered with either.

The plan goes awry when a homeless man witnesses them stashing the cash and they end up killing him to keep him quiet. This upsets Ty, the new guy on the crew, and he tries to leave. The others try to stop him and he ends up hiding in one of the trucks. The rest of the movie is spent with Ty inside the truck and the others trying to get him out.

Ty is one of the only characters given a backstory. Sadly it's a melodramatic, cliched one. He's a vet back from Iraq trying to raise his kid brother because their parents are dead. The bank is going to repossess their house and his brother is a troubled kid. Ty only agrees to help with the robbery because of his personal troubles. Although it gives Ty a motive for helping with the robbery, it's so poorly written that it doesn't help the audience with a motive for caring about him.

There are a few okay action scenes, but it takes far too long to get to them. And when you don't really care what happens to any of the characters it's hard to worry when some of them are in danger. It's not as if you're ever left on the edge of your seat.

If it weren't for the kind of famous nature of the cast then surely this movie would have been released straight to DVD. It's about the level of a bad made for TV movie. Even at just 88 minutes it seems to drag on for far too long.