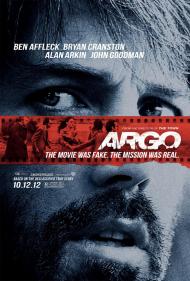 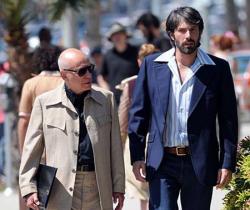 With Argo, Ben Affleck continues his hot streak as a director and this time he's moved beyond the confines of Boston and directed a movie on the world stage. Also playing the lead role, this is his most entertaining effort so far. It balances comedy and tension quite perfectly.

The story takes place during the Iranian Hostage Crisis of 1979 and 1980. When the American backed Shah of Iran was overthrown and the hardline Islamic Ayatollah Khomeini took power, the American Embassy was stormed and the staff taken hostage. Six embassy workers managed to leave by a back door and took refuge in the Canadian Ambassador's house. The State Department and the CIA worked in conjunction with the Canadian Government to come up with a plan to sneak those six out of Iran. This movie tells the story of that plan.

Affleck stars as CIA Agent, Tony Mendez. He's tasked with coming up with the means of moving the Americans (codenamed the Houseguests) out of the country. While watching Battle for the Planet of the Apes on television with his son, he hits on the notion of pretending to be a Canadian film crew, scouting locations for a Sci-Fi movie. Deeming it the least bad of all the bad ideas come up with so far, he's given the go ahead. Using his contacts in Hollywood, he manages to build up a cover identity and enters Iran, but will he be able to get the Houseguests out with him? Okay, sure it's a matter of public record whether or not he succeeded, but it's a testament to the filmmakers that they still manage to keep the tension high.

To counter balance the tension and life or death drama in Iran, the assembling of the fake production company provides some comic relief. Alan Arkin is a scene stealer (when isn't he?) as the old film producer whose name provides some legitimacy to the project. As he puts it, “If I'm going to produce a fake movie, then it's going to be a fake hit.” He and John Goodman, who plays a Hollywood makeup artist, make a nice team. They could star in their own movie as these characters and I'd happily watch it.

Although as a whole, this movie is very well done, it could have been a little more tightly edited, particularly in the third act. The entire escape plan consists of the Houseguests being able to bluff their way past security at the airport. The story stretches out the buildup to that moment, not tragically long, but long enough for me to wish that they would get on with it at least once.

Ben Affleck, the “movie star”, didn't always make the best choices, appearing too often in big budget flops like Pearl Harbor and Daredevil or critically reviled films like Gigli and Surviving Christmas. Ben Affleck, the director, however, is on a roll. If he can maintain this same level of good taste and judgment, a future Best Director Oscar seems almost inevitable. 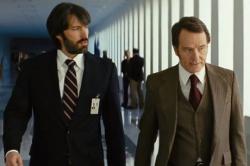 All of the scenes featuring the Iranians looking for the Americans are conjecture, created by the film makers to up the ante. We do not know how close they were or were not to capturing them. We have no idea just what they knew of them. For all we know, the Iranian authorities were not even actively looking for them. They were in hiding for months. How hard would it be to guess that they were in the care of an American ally?

No doubt, hiding in a country where showing your face could get you grabbed and thrown into jail would be a scary situation, but this film dramatizes the events in falsehood. In fact, the entire climax of the film was made up. Spoiler Alert: It was Canada that bought the tickets for the Americans, not the U.S. State Department. No one rescinded them at the last minute. The walk through the airport went, in the words of the real Tony Mendez, "smooth as silk." Not at all as depicted in the film.

"Argo" was a made up film to fool the Iranians, just as Argo is a made up film to fool audiences into thinking the events were more exciting than they really were. I am bothered by historical events being rewritten. Affleck and the screenwriters Hollywoodized a true story. Affleck does a great job on the look and feel of the time and place, right down to the old Warner Bros logo Scott mentioned. However, it is all too clear when the true stuff ends and the bull shit starts. If the marketing had not hung so much of this film's appeal on it being based on a true story I may not have minded so much, but since it did, I have to call them on it. 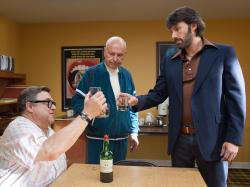 As much as I was entertained by Argo, the liberties it takes with historical truth have somewhat tarnished its luster. I definitely enjoyed it but they should have clearly stated it was “loosely” based on a true story. Emphasis on loosely, since nearly the entire second half of the movie has been fictionalized. I must also take umbrage with the fact that Affleck cast himself as Mexican/American Tony Mendez. Lead roles for minorities are rare enough in Hollywood without Caucasian actors commandeering them when they do come along.

I must echo my brothers on praising the period look and feel of Argo. It's like a vintage Sydney Pollack directed, Robert Redford starring, political thriller. Affleck even sports Redford's hairstyle, only in brunette instead of blonde. I was a kid of 12 or 13 when these events occurred. I have distinct memories of watching news clips dealing with the Iranian Hostage Crisis and the Shah of Iran seeking diplomatic immunity. The clothing, hair styles, cars and television sets all look like my childhood, right down to the Love Boat promo that is shown on a tv.

It's a shame the historical inaccuracies have marred this movie's legacy because it is a hell of an entertaining watch. The scenes in Hollywood were my favorites. I agree completely with Scott that I would also enjoy a movie starring Alan Arkin and John Goodman as their characters here. Alan Arkin is pushing 80 but he remains a vitally active performer. He brings his vast experience to the role of producer Lester Siegel. His Oscar nomination is well deserved. John Goodman has become quite simply one of the best, and most ubiquitous, character actors of his generation. His makeup artist, John Chambers, is just full of great old Hollywood anecdotes and he is fond of name dropping, “I made a picture with Rock Hudson once.”

Affleck's direction is likewise sure footed. Besides his meticulous recreation of the time period he demonstrates an adept talent for building tension and for fluid pacing. This is one of the few “serious” movies of 2012 to clock in under the two hour mark. The climax succeeds because of how close the six come to getting caught.

I don't blame Affleck. It's a movie and it needs an exciting finish. The problem is in how they marketed it as a true story when in fact it plays very fast and loose with the actual events that transpired. For anyone able to separate history from a fictionalized Hollywood version of it, Argo is one of the most entertaining movies of the year. For those who unrealistically expect absolute truth on the big screen, to quote the movie I say, “Ar, go fuck yourself.”