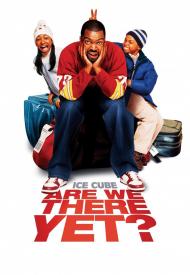 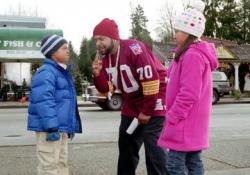 Philip Bolden, Ice Cube and Aleisha Allen in Are We There Yet?

Are We There Yet? is the best advertisement that I've ever seen for Military School. The two children in this movie who are supposed to be so cute and funny and whom we're supposed to feel sorry for because deep down they're just troubled kids upset over their parent's divorce, are so annoying that I'm quite sure twelve years of heavy discipline would help.

Ice Cube (who also co-produced) stars as Nick Persons, a sports memorabilia storeowner who falls in love at first sight with Suzanne (Long), a single mother of a young daughter and son. Against his better judgment he agrees to take Suzanne's kids from Portland to Vancouver so they can be with her on New Year's Eve. The children, who are determined to keep their mother single in the hopes that their parents will reunite, do everything in their power to drive Nick away.

This could have resulted in some funny material, but the writers decided to go a different route. They decided to aim their sense of humor a few feet below the Home Alone movies. The jokes are along the lines of children doing harm to grownups in what is supposed to be a cute and hilarious manner. The son kicks Nick in the groin, they drop balloons filled with glue on another of their mom's suitors, they plant a corkscrew in Nick's pocket just before he walks through a metal detector and is body slammed by several security guards, etc. etc.

About the only thing this movie has going for it, is Ice Cube in the lead role. Despite his often poor choice of movies – including this one – he retains a certain charm and presence that add up to an onscreen charisma that makes him watchable even when he's in the most ridiculous of situations. Not that even he can save the lame premise of this movie, but he does help make the movie just a tiny bit more bearable.

Blissfully this movie only clocks in at 90 minutes, so if you're unfortunate enough to be forced into watching it, you won't have to ask, "Are they there yet?" too many times. 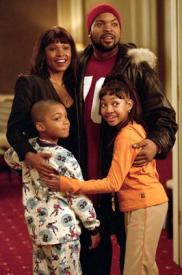 Nia Long, Philip Bolden, Ice Cube and Aleisha Allen in Are We There Yet?

My sons laughed throughout this movie, especially my nine year old. Every time Ice Cube got hurt or mad, he busted a gut. I however, found much less to laugh at. My favorite joke is when Ice Cube shows the little boy how to intimidate people by using a fierce expression. Later Ice Cube tries to use it on someone himself, only the guy responds, "Mister, I've been married for 38 years. You can't scare me."

The movie goes for the heart in a couple of scenes. At one point the children discover the real reason why their father is so distant. The director rushes over it quickly. Had he spent a bit more time showing how much the kids are hurting because of their father, I may have had more sympathy for them. Perhaps the director decided to edit that part of the movie to lesson the obvious bad choice that was made in casting two ineffective child actors.

This is a harmless family movie that moves at a brisk pace, but it asks the audience to accept too much at face value. After knowing a woman for a week Ice Cube agrees to drive across country with kids who destroy his vehicle and punish him in many ways. Then at the end of the movie, after only knowing the kids for two days, he tells them that he loves them?