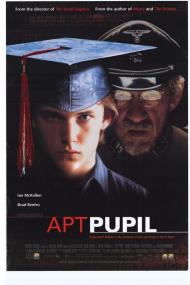 Based on a Stephen King short story, Apt Pupil is a tale of a dangerous curiosity and morbid manipulation. As one character tells the other, "To have someone in your control. To have them know that they are alive only because you have not decided to the contrary. Do you have that power? Ask yourself. It's not an easy question. I think you know that."

Todd Bowden is an advanced placed highschool student. At sixteen, he is already a senior. After studying the holocaust in school, he becomes obsessed with the subject. Much to his joy, he discovers that an old man, Arthur Denker, living in his home town is a Nazi war criminal. With balls of steel, Todd knocks on Arthur's door and informs him that he knows his secret. His motive is not to turn him in but to force him into telling him stories of the atrocities in the death camps. Todd wants to know what it felt like.

Feeling pushed into a corner, Arthur agrees, and begins telling Todd stories of mass killings. Over the course of months the two bond in a strange way. The more stories Bowden hears, the more withdrawn from the rest of his life Todd becomes.

One day Arthur gets the opportunity to gain some power over Todd. This leads to a game of cat and mouse, with each trying to gain control of the other. "Do you really think that I would just stand by and let you turn me in without dragging you under with me?" Apt Pupil is a great story. You never know what is coming next. The two main characters move about each other in weird ways. You are never sure if they respect or fear each other.

The cast is good. Although McKellen had been acting in England since the 1960s, it was not until 1998 with Apt Pupil and Gods and Monsters that he really got noticed in The United States. Renfro plays Todd with the confidence of a veteran police officer. He bravely lies to everyone around him in his attempts at manipulation. His time spent with Arthur supposedly changes him, but we are never shown what he was like before they met, so his character is not completely understandable.

Because Todd is not fleshed out, the movie loses it's message. Is Apt Pupil saying that what you take into your mind, you take into your heart, or was Todd always a bit off, and Arthur was simply the catalyst that allowed it to show?