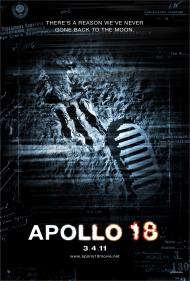 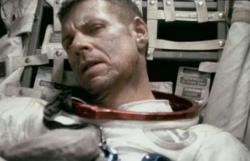 Apollo 18  is another one of those movies that presents itself as reality in the vein of The Blair Witch Project and Paranormal Activity. I've never seen the point of this genre. It's just a gimmick that I've always found to be distracting. We know it's a movie, why pretend it's something else? Filming Apollo 18 in a more traditional manner would certainly have given the filmmakers more freedom to tell a cohesive and possibly more entertaining story.

The plot tells the story of Apollo 18, a secret final mission to the moon, supposedly through edited actual footage from the mission. The astronauts are told that it's a secret Department of Defense mission where they are going to install early warning missile detectors.  Right away I have a hard time believing that the astronauts would buy this story. Early warning systems would certainly give you more of an early warning from orbit than they would on the moon and why keep the whole mission a secret? Why not just keep the purpose of the mission a secret? Of course, there's a real reason the DOD wants to keep the mission secret, but the astronauts don't know it and so I question why they didn't question.

The crew follows the usual pattern of moon landings and keep one man in orbit while two actually land. Walker and Anderson are the two who land and shortly into their mission they discover some footprints that lead them to a Russian Lunar lander where they also discover a dead cosmonaut. Why the Russians would keep a moon landing secret is another question that has no answer. After Walker and Anderson return to their lander, they begin to hear strange noises and there's an odd interference on their radio.

Despite some weak plot holes and my slight annoyance of the format, I have to confess that until this point I was more intrigued than I thought I would be. The build up of the mystery is fairly well done. I wanted to know what was happening and the creepiness was being built up nicely. However, once we learn the cause of the noises and what killed the Russian Cosmonaut it goes downhill. I don't want to spoil anything, but I'll just say that Aliens did it better.

If you're one of those people who believes the US government is evil, secretive and constantly plotting conspiracies than you might enjoy the plot more than I. Here the DOD keeps the real purpose of the mission from the astronauts and is quite willing to sacrifice them. To me this seems implausible and stupid. For one thing, I question the need for a manned mission to accomplish what they want anyway. And for another, I assume the DOD wants their mission to succeed and the odds of that happening would be greatly increased if the astronauts were prepared properly for it.

One of my problems with the "culled from actual footage" presentation is the way that every single important event in the movie gets caught on film, including one point where an astronaut happens to drop a camera in the perfect spot so that we have a birds-eye view of an important scene at the climax and then remembers to stop and grab that same camera even though he's running for his life at that point.

Despite some decent suspense near the beginning of the movie, the end result is rather silly. I don't know if they had filmed it like a regular movie if it would have made it any better, but surely it couldn't have hurt. 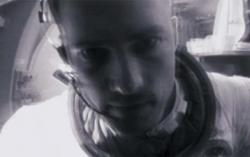 I dislike the faux-documentary genre as well except in the case of a spoof like Spinal Tap. This movie is clearly aimed at conspiracy nuts that will probably actually believe it really happened. However, even if it had been filmed as fiction with a straightforward approach this movie wouldn’t have worked due to the incredibly stupid idea behind the alien life form.

The cast of just three men all do a decent job with the script they were given. Warren Christie has real star potential with the necessary looks and talent to be leading man material. Lloyd Owen likewise proves himself up to the role. The problems with the movie certainly have nothing to do with the onscreen talent and in fact they make it better than it would have been in the hands of lesser actors.

I agree with Scott that there is genuine tension and an eerie mood is created during the early stages of the mission. Unfortunately it quickly jumps the shark and the written information that serves as an epilogue induced shrieks of laughter from the audience, not exactly the effect the filmmakers were going for.

The plot holes Scott mentioned are all the worse because the movie tries to pass itself off as fact. I agree that the entire set-up of the mission makes little sense. And since the veracity of the entire story hinges on just why these men were sent to the moon it ruins the movie.

It will definitely appeal to the more paranoid and delusional among us. Those that will easily believe our government would be willing to unnecessarily throw away the lives of two astronauts for very little gain will probably enjoy the movie more. It is set in 1974 in the immediate wake of the Watergate scandal which gets mentioned as a way of justifying the decisions made by the DOD.

I’m not usually one to flag wave but Apollo 18 is not just a terrible movie; the clumsy script comes across as borderline unpatriotic.

Wow, what a boring film!  Apollo 18 does not satisfy on any level.  The characters are all generic, or at least the character of Anderson is generic.  Of the three cast members he is the only one with any back story.  We are supposed to root for him but we know going in that the ending is not going to be a positive one so what is the point in caring what happens to him.  This really is a step by step horror film.  First they hear noises, then something gets moved, then they see something odd.  The only partially unique thing about it is the setting.  The central plot could have taken place in an isolated house, out in the woods or on a boat.

Scott suggest that some people may enjoy this film and it's conspiracy theme.  Patrick even believes some people might think this is a true story.  I have not met anyone that stupid and paranoid, but maybe Patrick and Scott have.  If the film makers actually intended for people to believe this may be a true story, they should have never shown the aliens, just as The Blair Witch Project never showed the witch and Paranormal Activity never showed the demon spirit.

I can always gauge a film by how much I talk about it on the car ride home with whomever I saw the movie with.  As we drove through traffic my son pointed out that Warren Christie could play the lead in a movie based on the video game Mass Effect.  He later showed me the game case, and there is a resemblance.   I have no idea what the game is about but I know it would likely be a better film than one where some astronauts go to the moon and get crabs.