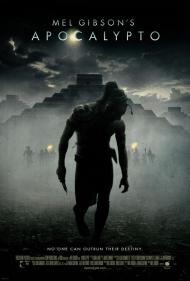 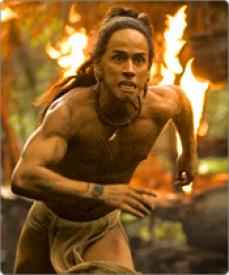 Mel Gibson may suck at Public Relations, but he knows how to direct an action movie.

There's some sort of sadist in Mel Gibson. He certainly seems to enjoy putting the characters in his movies through extreme torture. There's also a really good filmmaker inside him, since he also knows how to make entertaining movies. And despite the violence being at times so completely over the top that it borders on Pythonesque, Apocalypto is no exception.

The movie is set in the ancient Mayan civilization and involves Jaguar Paw, the hero of the story, being captured, along with most of the rest of his village, to be used as part of a human sacrifice to appease the gods. He is saved at the very last second by a fortuitous solar eclipse and manages to escape. The final and most entertaining third of the movie is an extended chase through the jungle as he tries to get back to his village where he managed to hide his son and very pregnant wife.

Jaguar Paw's race through the jungle where he battles wild animals, the warriors chasing him and even the jungle itself, is tense and filled with edge of your seat moments. You might be disgusted or repulsed by some of the violence, but you certainly won't be bored.

The same can't be said about the humor in the story, which is used sparingly, but the few times jokes are thrown in, they're pretty lame and just don't work. A couple of times, the subtitles are used to interpret the ancient Mayan language into modern slang and it's awkward, not funny. When a huge tree crashes down near the leader of the invading Mayans, he says in what must be the first ever Dustin Hoffman impersonation, "Hey, I'm walking here." And when another warrior is bitten by a snake, another says, "He's fucked."

There are some unintentionally funny moments. When one warrior is struck in the head, his brain is exposed and blood spurts out in a way not seen since the Black Knight in Monty Python and the Holy Grail. And when the pregnant wife, trapped in a flooding cave, manages to squeeze out her baby while holding her son on her shoulders and balancing on a rock as she struggles to keep her head above water, you won't be able to not laugh.

Despite these few scenes, overall the movie is highly entertaining. Gibson has said in interviews that the movie contains deeper meanings, but if they're there, you won't notice them. Whatever message he is trying to get across is lost in the action.

Think what you want of Gibson as a person, but when it comes to making action movies, he knows what he's doing. 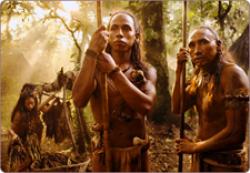 The movie depicts the savagry of the Mayans without ever highlighting their accomplishments.

Gibson knows what he is doing when it comes to action pieces. The tension and desperation of the characters are there in spades. The movie keeps moving and you never quite know what will happen as everyone's life is on the line.

As someone who has always been fascinated by the ancient civilizations of South and Central America, I was a bit disappointed that the only aspect Gibson centered on was the human sacrifices. The ancient Mayans were a very sophisticated civilization. His view of those amazing people is very bleak. Yes they had human sacrifices, but they also had their own writing's and calendar. They had a very ornamental society. They used gold in many ways, thus the Spaniards conquered them out of greed. Gibson simply shows a city state full of slave traders, prostitutes and class differences. They were a scary race but they created huge pyramids that still perplex archeologist today.

I agree with Scott that the jokes really do not work. Gibson's point is to show just how human and normal these people are. They laugh, cry and have annoying mother in-laws. Why would we see them any other way? The joke about the man who cannot conceive a child with his wife drags on for far to long. That time could have been used on scenes of the grandeur and beauty of the Mayan city.

Apocalypto will not bore you but it is hardly the history lesson it could have been. Gibson chooses to keep the movie intimate and the camera rarely leaves Jaguar Paw. Perhaps he should have taken a lesson from Cecille B. Demille who proved, with The Ten Commandments, you can show spectacle while still keeping the plot character driven. After all, if your going to have the movie take place in such an original setting, you might as well take full advantage of it.

Scott, I agree about Gibson possessing a sadistic streak. He certainly enjoys making movies that feature plenty of physical agony and mental anguish. The relentless violence and cruelty on display here gets to be a bit much after a while. I also agree with Eric in that Gibson fails to do the Mayan civilization justice. He focuses too much on its seedier side while ignoring its more noble and impressive achievements.

Still, for all his personal demons, Gibson remains a uniquely talented filmmaker. He knows how to tell a story even though he often goes far over-the-top in the gory details of his characters suffering (like when the wild animal (I think it was a monkey) falls down into the hole with Jaguar Paw’s wife and son. She pokes it with a stick and it doesn’t move, only to viciously attack a second later, forcing the very pregnant woman to beat it to death).

He also throws in a few humanizing touches, although one could argue not enough of them. I appreciated the way he shows the relationship between the cuckolded man and his domineering mother-in-law after they are captured. Suddenly these two people, who ostensibly couldn’t stand each other, realize just how petty their previous problems were.

The cinematography is quite stunning. Gibson makes good use of the jungle setting. As he proved with The Passion of the Christ he has a great eye for the visual side of movie making.

Apocalypto runs too long however. Since he chose to keep the story on such an intimate level it needed to be trimmed a bit. This is no epic story of the fall of the Mayan civilization but Gibson treats it as such. The final 45 minutes during which Jaguar Paw is chased through the jungle is the best part of the entire movie but takes too long in coming. His revenge against his captors is satisfying but you need patience getting there.

Rudy Youngblood is good as the hero. He isn’t as physically imposing as some of the other warriors but makes up for it with his courage and remarkably strong will to survive. Jaguar Paw is the kind of character you root for to succeed against incredible odds and cheer with each time he kills off one of the bad guys.

Mel Gibson is certainly a maverick. He does things his own way and his movies - although flawed - are never boring. 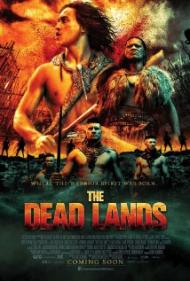