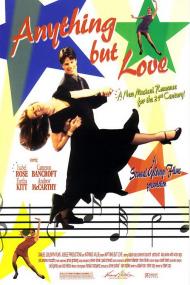 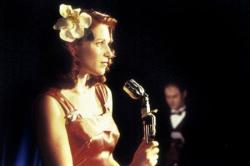 Isabel Rose in Anything but Love.

Director Robert Carey reportedly said that Anything But Love, his feature film directorial debut, was ''meant to reach anyone who's a romantic, anyone who's a dreamer, anyone who loves a fairytale or loves New York City.' I figure that I'm as much a romantic as the next guy, I've always thought of myself as a bit of a dreamer, and I love New York City, so adding all that to the fact that I also love musicals and this is one, how could this movie fail to please me? And yet despite a great effort, style, and a knock 'em dead performance by Isabel Rose in the lead role, the movie falls short of its potential.

Billie Golden (Isabel Rose) is a girl with a whole lot of talent whose career is going nowhere fast. By night, she sings cabaret songs in a nightclub in Queens that's owned by an old friend of the family, while by day she waits tables. It's a story we've seen a million times, especially in the days of old, when musicals like this were a staple of the Hollywood machine. And it's exactly from those old movies that this movie draws its inspiration and sense of style, from the lighting and sets, right through to the song and dance numbers. Like the movie, Billie is stuck in the 1940s and '50s, right down to her wardrobe, which at times resembles Rita Hayworth and at other times Audrey Hepburn.

With her career bottoming out, Billie considers giving up on her dreams of stardom, especially when she runs into Greg Ellenbogen (Cameron Bancroft), the guy she used to have a crush on in high school, who is now a successful lawyer. Around this same time, she also meets Elliot Shepherd (Andrew McCarthy), a not so successful pianist who shares her passion for music. Faster than you can say, ''Let's put on a show!'' both men are in love with Billie and she must decide between a life of luxury without her musical career with Greg, and a life of poor artistic struggling with Elliot. What is a would-be diva to do? Get some advice from Eartha Kitt of course, who just happens to be appearing at the club where Billie waitresses!

Two things undermine the success of this movie: the dialogue and the acting by some of the movie's leads. Isabel Rose and Andrew McCarthy both do great jobs with their characters, managing to overcome the weaknesses of the script with acting skill and sheer moxie. However, some of the other roles, particularly Cameron Bancroft, who gives one of the stiffest performances I have ever seen in a motion picture, are unable to rise above the material. The end result is a slightly uneven mix of music and melodrama that displays Rose's talent, but little else.

Not that showing Rose off is a bad thing. She has charisma and a great singing voice that belts out old standards, both on-stage and in fantasy dream sequences. If only the rest of the movie lived up to her, but sadly it does not.