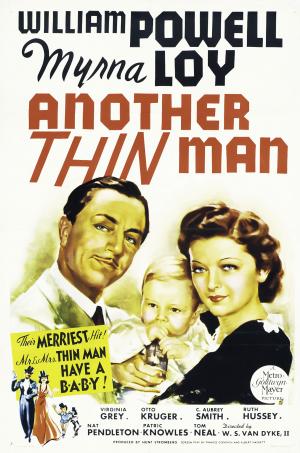 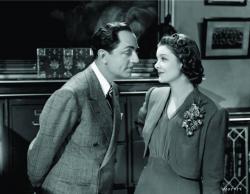 William Powell and Myrna Loy in Another Thin Man.

Another Thin Man is the third installment in this successful detective series. Nick and Nora Charles are back along with Asta and with the addition of baby Nicky. When Nora's father's old business partner Colonel MacFay summons Nick and Nora for a quiet little weekend of 'business' in the countryside out on Long Island, you just know it will turn out to be anything but. They soon find themselves smack in the middle of a murder investigation that eventually follows them back into the city.

This movie is slightly darker in tone than the first two Thin Man movies, but it has a typically complex plot. This is the only other movie in the series, after the first one, that is actually based on a story by Dashiell Hammett.

The chemistry between William Powell and Myrna Loy is what makes these movies work. They not only looked great together, but also seemed to behave like an actual married couple. Average American couples could relate to them at the same time that they envied their wealthy and exciting lives. And boy did they put away the liquor. In nearly every scene Nick has a cocktail in one hand. Here's a typically witty exchange between husband and wife.

Nora: "I got rid of all those reporters."

Nick: "What did you tell them?"

Nick: "What a gruesome idea."

These movies are great escapist entertainment. What's more, that's all they aspire to be. Many of today's filmmakers could learn a thing or two from these old movies. W.S. Van Dyke (One Take Woody) shows that it doesn't necessarily take a huge budget and a lengthy shoot to create a good movie. But then again he had William Powell and Myrna Loy working for him, something that no director today can claim.

Thank God for the eternity of celluloid. We have these shimmering silver baubles from long ago to watch over and over, whenever the mood strikes. 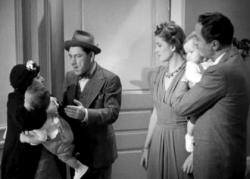 As Patrick wrote, the chemistry between William Powell and Myrna Loy is the best asset the Thin Man movies have.  I agree with him that their dialogue is the highlight of the film. In an early scene, Nick is sitting on a couch with liquor in hand, of course, while Nora is speaking gleefully into a telephone, “Oh, we had a lovely trip. Nick was sober in Kansas City.” When Powell delivers this sarcastic line to Loy, “How do you like your quiet weekend?” He says it with just the right amount of casual familiarity as he leans in and touches noses with Loy.

Thus, Another Thin Man loses its charm whenever Nick or Nora is not on the screen.  We watch these movies to visit with Mr and Mrs Charles. As this is a mystery we have lots of people coming and going to keep things a bit confusing, but I think any time away from the Charles’s is screen time wasted.

When Charles and some other men go to the suspect’s girlfriend’s apartment, the girl ends up in a fight with one of the men. Powell does not have a single line in the entire scene, yet the scene belongs to him. As the girl beats a man with her shoe, Charles’s only concern is that the fight does not break the liquor bottle he partakes of.

My favorite scene is when Powell meets up with Loy in the night club. He rescues her from a throng of admirers with a ridiculous lie that she plays easily along with. She later asks him, “How did you find me here?” Nick sits down and responds. “I saw a great group of men standing around a table. I knew there was only one woman in the world who could attract men like that...” Loy starts to smile but Powell continues, “…A woman with a lot of money.”

Nick and Charles tease each other constantly. It is a sure sign of a strong relationship. They both also defend each other just as much. The cops try to cast a dark shadow on Charles by telling Nora about women in his past. Nora does not take the bait. To keep her from worrying, Charles never tells Nora about him being in dangerous situations.

As much as I love Nick and Nora, they are not exactly a realistic couple.  If they were a real couple, Nora would complain more and Charles’s drinking would likely cause problems. In a scene near the end featuring another fight, Nora runs to Nick, who has a drink in his hand, and says frantically, “Nicky do something.” Nick responds, “Oh, Yes of course.” and takes a drink.

I never really cared who the murderer was, but I sure enjoyed spending time with Nick and Nora Charles. 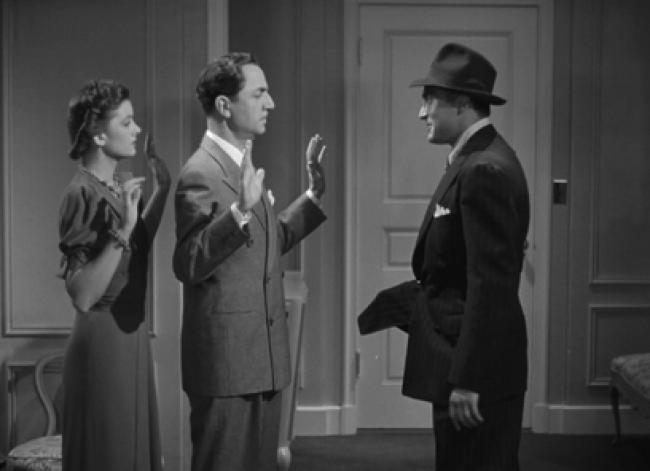 You wouldn't know it from his performance in this film, which is as impeccably charming as always, but this was William Powell's first film following treatment for colon cancer. The trailers for this film announced, "He's back! And William Powell's return to the screen is the best movie news in two years!" Powell would later say that walking onto the set was like coming home again, and that, "Myrna and Woody were wonderful. If they had been sentimental or emotional about it -- I don't think I could have stood it, I was so choked up.' But those two knew. All they said was, 'Well, Powell at last -- and you're late again!'" The resilient actor would star in over 20 movies after this one, including 3 more Thin Mans, and live another 45 years until the ripe old age of 91.

As both my brothers pointed out, it's the charm of Powell and his co-star Myrna Loy that really make this and all of the Thin Man movies so damn enjoyable. The two stars made 14 movies together (this was their 8th) and the easy camaraderie they shared is on full display here. They banter and tease each other, but their love is never in doubt. Eric said they're not a very realistic couple, but realism isn't what these movies are about. They were escapism for a country coming out of the Great Depression with the prospect of war looming and they're escapism today for audiences looking backwards to a more glamorous time when men dressed in suits and women in dresses. These are easygoing pieces of entertainment that go down as smoothly as a cocktail.

The mystery, which is the excuse for this movie, is completely beside the point. It hardly matters who the killer is. The investigation into the crime just gives Nick and Nora an excuse to glide around New York City. Oh sure, there's a traditional denouement scene where Nick lays out who killed whom and why, but it couldn't matter any less in terms of entertainment. One thought did strike me when Nick discovers a matchbook with a nightclub's name on it and that is that in the old detective movies of the 30s, 40, and 50s, people were forever finding matchbooks that lead them somewhere, but now that no one smokes anymore, how on earth does any murderer ever get caught?

It's true that the movie suffers when Powell and Loy aren't on the screen, but thankfully those scenes are rare. The very best scenes are when they're both on the screen together. That's when the magic happens. They are the reason to watch this movie and that's more than enough reason anyone should need. 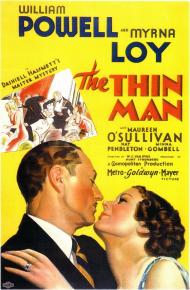