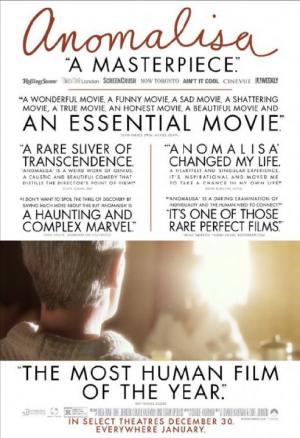 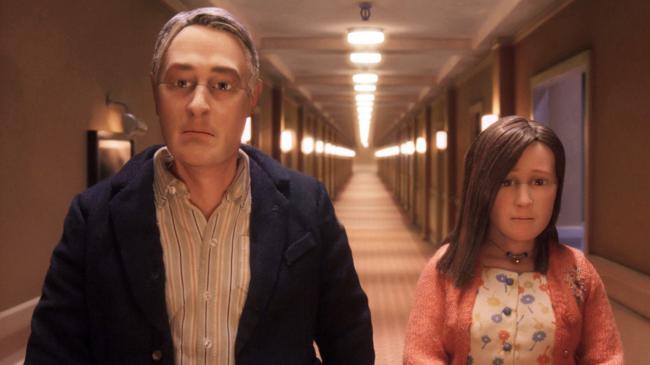 Anomalisa, like all of Charlie Kaufman's films, is a little odd. It would be odd even if it wasn't a stop motion animated film, but that animation adds a whole other level of quirkiness to it. Unlike his other films though, this quirkiness isn't accompanied by a sense of humor. In fact, it's one of the most depressing films of the year.

English actor David Thewlis provides the voice of Michael Stone. He's a self-help author on a promotional tour and the entire film takes place in one night and the following day as Michael visits a customer service convention at a hotel in Cincinnati to deliver a speech. The name of the hotel is the Fregoli, which is also the name of a syndrome where a person sees and hears everyone exactly the same, which is something Michael is suffering from. Actor Tom Noonan provides the voice for all of the characters in the film apart from Michael and Lisa (Jennifer Jason Leigh), including all of the women and even Michael's wife and son, because that is how he hears everyone. And it's why Michael is so excited to hear Lisa's voice, because she sounds like herself and not everyone else. It's why he invites her for a drink and then back to his room. However, it's fairly obvious, and not much of a spoiler, to see that this isn't the sort of movie destined for a happy ending.

Kaufman originally wrote the script as a 40 minute audio play, with no intention of ever filming it. He agreed to turn it into a short film and financed it entirely through Kickstarter, but the campaign was so successful that he expanded it to feature length. I think I would have enjoyed it more as the shorter version.

As with all Kaufman's scripts, there are some interesting ideas here. And to be honest, Kaufman and Johnson do manage to draw you into this world and there are times when it's possible to forget you're watching puppets instead of people. This is helped by the voices of its three castmembers. Even though the ending seems sadly inevitable, I still wanted to see exactly how it would all end.

The downside of the movie is that it's really fucking depressing. Michael is living in a dull monotonous hell where everyone looks the same and sounds the same. He's offered a brief reprise and a glimmer of hope, as are we, but it's very short lived. It's not the sort of movie I'd ever want to watch more than once. 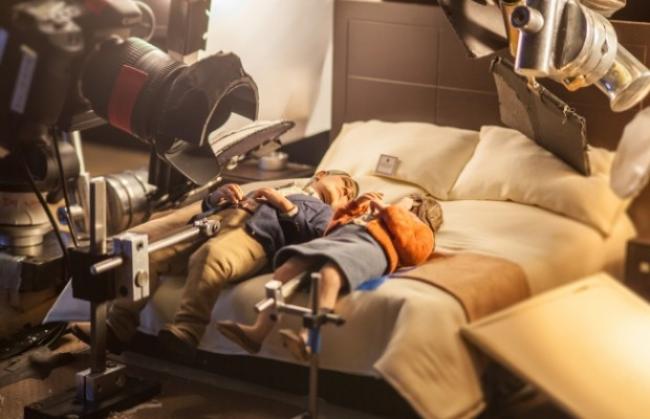 Anyone who would want to watch this again would only be doing it to show someone else the stop action nudity and sex scenes. If you actually desire multiple viewings of this gloomy, dragged out film, you should probably be put on a suicide watch. It is that joyless. My brother Scott wondered who is the target audience for In The Heart of the Sea (2015). I will repeat that question for this film.

The story is full of irony. Michael gives public speeches to adoring crowds yet he feels horribly alone. He can tell others how to act in business and how to deal with people but he himself has no clue how to do it, at least not for a long period of time. He states over and over in his speech that you should be friendly and a smile costs nothing. Those are just words that he himself certainly does not live by. He abandoned an old girlfriend who loved him terribly. He cares nothing for his wife and son. He is perturbed by his wife's efforts to throw him a party. He puts zero thought into buying his son a gift.

Michael needs psychiatric help. He nearly has a breakdown during the speech. Even though person after person tells him how his book has helped them or their business, he himself is no good to anyone around him. He is a walking plague of misery. His suicide would be a blessing to all who personally know him.

The fact that this film was made with stop action is not any type of advantage. This could have been done just as easily with actors. I am laughing to myself though, thinking of the nude scene where Michael hops around the room with his genitalia flopping about. The film maker had to adjust Michael's penis and testicles, take a shot, adjust his junk a bit more, take another shot and so on....Hilarious! 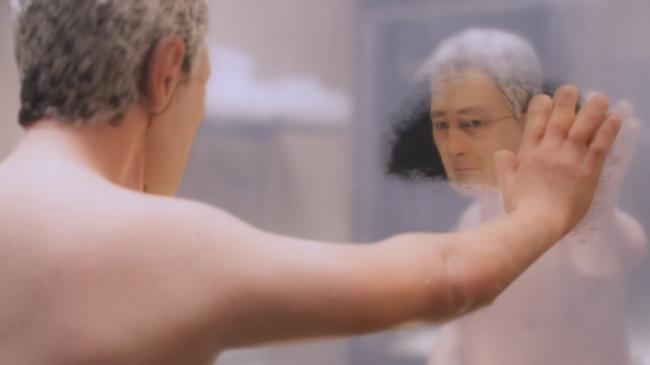 The irony of Michael Stone, as Eric mentioned, is the fact that as an author of self-help books he has affected thousands of people's lives in a positive manner. At the same time, in every aspect of his personal life - whether as a father, husband, lover or friend - he's been a horribly selfish person.

The fact that by the next morning she begins to sound like everyone else to him shows the level of this man's sickness. Anyone who cannot distinguish Carole Lombard's trilling laugh of a voice is beyond help anyway. As both my brothers wrote, Michael is a depressed character wallowing in self pity and it's depressing to spend time with him.

The voice work by the three leads is very well done. Between their considerable acting talents and the skillful technical achievement of the stop motion photography Michael and Lisa become very real people indeed. Several times I forgot I was watching puppets. But ultimately I'm with Scott on this one. A forty minute short version of Anomalisa would have sufficed.