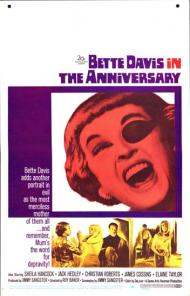 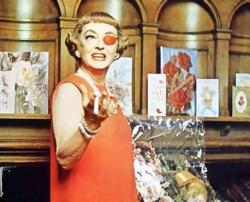 Bette Davis in The Anniversary.

The Anniversary is a British made black comedy from 1968. Bette Davis plays a one-eyed widow with three grown sons. She dominates and manipulates their lives through control of the family construction business, and with a series of intricate and intimidating threats, lies and guilt trips. It also helps that her brood are all spineless losers.

Years after her husband's death Mrs. Taggart still insists on her children gathering together each year to celebrate their parent's wedding anniversary. She takes the occasion very seriously. The festivities include a toast before the late patriarch's portrait, a fancy dinner out and even fireworks and a bonfire.

Only this year things will be different. Her two younger sons plan to defy their mother's authority and start leading their own lives at last. The middle son by taking his wife and children to Canada and the youngest son by getting engaged to a woman and striking out on his own. The oldest son still lives at home and vents his frustrations by dressing up in women's clothes that he steals from neighborhood clothes lines.

The mother/sons dynamic in this movie bears a striking resemblance to The Lion in Winter. Only Bette Davis' Mrs. Taggart makes Katharine Hepburn's Eleanor of Aquitaine seem downright nurturing by comparison. I mean this is a woman who uses the guilt that her middle son feels for accidentally shooting her eye out with a BB gun when he was a small boy to keep his spirit completely broken.

Bette Davis hams it up shamelessly and seems to be having a blast. The script provides some decent laughs. Probably the best line is when Bette Davis suddenly turns to the woman her youngest son has brought home and pleasantly requests, "Would you please sit over there, body odor offends me."

Though not a comic gem The Anniversary is entertaining fare and it's a pretty good example of the changing attitudes in the movies of the sixties. The youngest son, for example, sneaks away at one point to have sex with his fiancée in his mother's bed. Of course the poor girl wasn't expecting to find mother's artificial eyeball beneath the pillow.

The final shot of the movie is memorable. Bette Davis wearing a garish red eyepatch (she changes it during the course of the evening) laughing maniacally while she enjoys one of her anniversary presents. It's a statue of cupid with his bow, only when you move a lever on its back cupid pees.