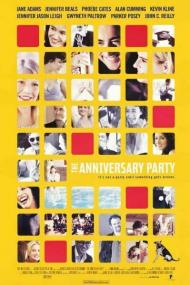 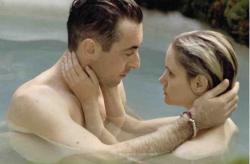 As the evening progresses the guests as well as their host's let their hair down more and more. Then when Gwyneth Paltrow's character bestows the gift of “love" in the form of ecstasy pills the party really gets interesting.

The fact that many of the guests are ex-lovers allows for decent tension and razor sharp dialogue. Especially good is the charades scene. Which comes across as improvised; though in interviews the two creators insist it was scripted. It works either way.

I recommend this movie as a refreshing alternative to the overblown blockbusters currently filling multiplexes around the country. Take a date to this one, but leave the ex-lovers at home. 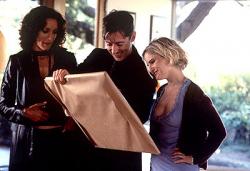 My main problem with this movie is the lack of a story.  When it comes to movies, I am a slave to plot.  Some people may disagree, but to me it is the single most important ingredient to any film.  The Anniversary Party lacks any real plot.

Oh sure, as Patrick points out, there are some great actors in this movie, and dialogue is as sharp as Patrick points out.  And by the end of the movie you really do feel as though you've attended a Hollywood party.  But so what?  That in itself just isn't enough to make an interesting movie.

One thing that Patrick doesn't mention is the comedy, which is sharp and biting at times.  Particularly amusing is everyone's reaction to the infamous next door neighbor's appearance at the party.  This and Jennifer Jason Leigh's character's business manager's inappropriate anger during the charade scene are two of the movie's amusing highlights.

Interesting characters and good actors are just not enough to make this an interesting or good movie however.  This was one anniversary I don't ever care to celebrate again. 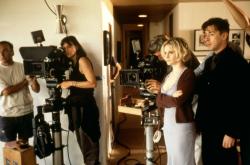 I never bought any of these people as being even remotely real. Everyone on screen acts phony or bluntly honest with each other, and often at the same time. This is how we wish people talked, as it can be quite interesting, but so rarely do, due to basic manners and social etiquette. Sally’s best friend Sophia yells at her, “And you're not going to move to London to have the offspring of some sexually ambivalent man-child, oh-now-I'm-a-writer-now-I'm-a-fucking-director, English prick bastard Joe Therrian! He's probably going to leave you for Skye Davidson anyway!” I truly liked no one on screen.

Sally and Joe invite their neighbors over whom they are feuding with, as their dog’s barking annoys them. The neighbors never let it go, even giving the anniversary couple a collar for their dog. In a private moment, the neighbor asks Joe to autograph a copy of the book he wrote. No one invites someone they do not like to their party unless they have something to gain, and the only thing to be gained here is their presence so as to excuse any noise their party may make but since they are moving soon, why care at all.

The charades scene is humorous, especially the part Scott mentioned with the inappropriate anger, “Would you just move on to the fucking second syllable you stupid cunt!” I also laughed when one guest needs to change her clothes after the dog brushes up against her pants, so she puts on one of Sally’s formal gowns. My favorite line is spoken by Phoebe Cates, “You can't do yourself in! Kids just rob you of that option!” Her real life children with Kevin Kline play their children in the movie.

By the end of the film we see that this couple is hateful and bitter toward each other. Neither is loyal in any sense of the word. If it was not for all of the topless scenes in the last part of the film, I would have turned this off. These messed up middle aged people held little interest for me and I could not wait for this anniversary party to be over.