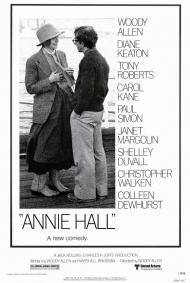 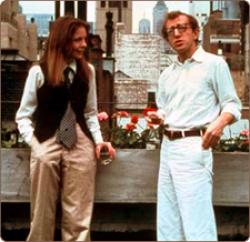 This is Woody Allen's masterpiece. It is one of the greatest romantic comedies of all time. Nearly every scene simultaneously elicits a laugh and touches the heartstrings. Alvy Singer and Annie Hall are great, great characters. My brothers tell me I have a habit of gushing over classic movies, well this is one that truly deserves the accolades.

The story is told in an interesting, non-chronological order. First we meet Alvy speaking directly to the camera. He narrates much of the story. We are shown some amusing moments from his childhood before his relationship with Annie unfolds. The first scene of them together is not them meeting, that comes later. There are also flashbacks of both of their previous relationships.

Allen uses some clever techniques for laughs such as mixing in animation, characters breaking the fourth wall to speak to the camera, split-screen images and one funny scene where he and Annie are talking while subtitles of what they are actually thinking flash on the screen. One amazing thing about this movie is that even with all this sleight-of-hand going on the story is completely believable and never gimmicky.

Annie and Alvy are opposites. She's a Midwestern, Christian, white-bread, aspiring singer and he's a neurotic intellectual New York Jewish comic. The attraction they have for each other is based on this polar magnetism. He tells Annie what books to read and what movies to see while she tries bringing him out of his pessimistic shell by getting him to try things he otherwise wouldn't.

There are too many great lines and scenes to mention but I will just offer up a few of my favorites.

Alvy sums up his philosophy of life to Annie this way, "I feel that life is divided into the horrible and the miserable. The horrible are like, terminal cases, you know, and blind people, crippled. I don't know how they get through life. It's amazing to me. And the miserable is everyone else. So you should be thankful that you're miserable, because that's very lucky, to be miserable."

Another funny moment that explains one of the great differences between men and women are when Annie and Alvy are both shown at their analysts via a split screen. They are both asked how often they have sex. Alvy says, "Hardly ever. Maybe 3 times a week." Annie answers, "Constantly. I'd say 3 times a week."

This movie is also a wonderful time capsule of the 1970's. Hell this movie is just plain wonderful from beginning to end and it represents the peak of both Allen's and Keaton's careers.

This was just Woody Allen's sixth feature film as  director (seventh if you count What's Up Tiger Lily?) and he's directed over 30 films since its release. While his early movies focused on the comedy, with Annie Hall Allen showed that he could do a deeper film that balanced the comedy with drama and heart. And in the 35 years and almost as many movies since, he's yet to match it.

I agree with you Patrick that the way Allen has edited the story together is quite clever. Instead of simply telling it in chronological order, it's presented  as a stream of consciousness as Alvy remembers it. As he explains to camera at the very beginning, "Annie and I broke up and I-I still can't get my mind around that. You know, I-I keep sifting the pieces of the relationship through my mind and-and examining my life and tryin' to figure out where did the screw-up come, you know, and a year ago we were... in love."

Although Allen had played basically the same character in his earlier films and during his standup routines, this is where he perfected his neurotic, Jewish New York character. Much of the humor comes from his neuroses. He's a hypochondriac who is convinced that the entire world is anti-Semitic. "So I said ... uh, 'Did you eat yet or what?' and Tom Christie said, 'No, didchoo?' Not did you eat, but Jew eat? Jew. You get it? Jew eat?"

Even when shown as a boy, he is depressed and refusing to do his homework because he's learned that the universe is expanding and will someday end, to which his mother replies, "What is that your business?" Allen would return to his early years in Brooklyn in his later Radio Days, which bears a resemblance to the flashbacks of him as a boy in this film.

While the relationship between Annie and Alvy is what gives this movie its heart, there are, as you said Patrick, a lot of laughs in it as well.

One of my favorite scenes is when Alvy and Annie are waiting in line at the movies when a man behind them begins pontificating loudly about the work of Marshall McLuhan, to Alvy's annoyance. When the man protests that he has a right to his opinion, Alvy pulls the real McLuhan from around the corner to tell the man, "I heard what you were saying. You know nothing of my work. You mean my whole fallacy is wrong. How you ever got to teach a course in anything is totally amazing."

Another great moment comes when Allen is trying to figure out what makes a happy relationship and he stops an attractive couple walking down the street to ask them their secret. The girl (Shelly Hack of Charlie's Angels) tells him, "I'm very shallow and empty and I have no ideas and nothing interesting to say." To which her boyfriend adds, "And I'm exactly the same way."

Allen also gets off plenty of jokes against Los Angeles. Saying, "I don't want to move to a city where the only cultural advantage is being able to make a right turn on a red light." And poking fun of their laid back health food lifestyle. When Annie mentions how clean it is in L.A., Alvy tells her, "That's because they don't throw their garbage away, they turn it into television shows."

For all the jokes though, it is the relationship between Alvy and Annie that makes it so wonderful. It's not a classic love story in the way that The Way We Were is on one end of the spectrum or When Harry Met Sally is on the other, but it is an effective one that evokes real emotion and ends on a sentimental note, which is something that Allen tends to avoid. But there's no denying that it's there in this one. Just listen to his final voiceover, "After that it got pretty late. And we both hadda go, but it was great seeing Annie again, right? I realized what a terrific person she was and-and how much fun it was just knowing her and I-I thought of that old joke, you know, this-this-this guy goes to a psychiatrist and says, "Doc, uh, my brother's crazy. He thinks he's a chicken." And, uh, the doctor says, "Well, why don't you turn him in?" And the guy says, "I would, but I need the eggs." Well, I guess that's pretty much how how I feel about relationships. You know, they're totally irrational and crazy and absurd and ... but, uh, I guess we keep goin' through it because, uh, most of us need the eggs." 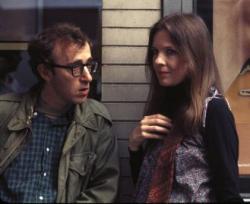 Woody Allen as Alvy Singer speaks some of the best lines ever spoken on screen. It opens with this gem, "There's an old joke - um... two elderly women are at a Catskill mountain resort, and one of 'em says, "Boy, the food at this place is really terrible." The other one says, "Yeah, I know; and such small portions.""  Allen even gets politically incorrect, "Don't you see the rest of the country looks upon New York like we're left-wing, communist, Jewish, homosexual pornographers? I think of us that way sometimes and I live here." Later he says, "Right, I'm a bigot, I know, but for the left."

Beyond the memorable dialogue, what makes Annie Hall so good is as Scott mentioned, the relationship between Alvy and Annie seems so very very real.  Patrick mentioned that these opposites attract each other.  Annie affectionately calls her grandmother, "Grammy."  While Alvy makes the snide remark, "My grammy never gave gifts. She was too busy getting raped by Cossacks."   I love the scene Patrick mentioned where Alvy and Annie comment on the frequency of their love making.  It is one that many couples can relate to.  Alvy is very insecure, while Annie does not care what people think of her.  Her choice in attire is the best example of that.  Her sloppy use of mens wear became a fad at the time of this films release.

Rarely has a film depicted a relationship in such a realistic, yet humorous way.  When Annie says, "I missed my therapy, I overslept." Alvy asks, "You know what a hostile gesture that is to me?"  Annie Hall has a bit of wisdom in many of the jokes.  Annie's and Alvy's relationship takes a natural path, with Alvy commenting, "A relationship, I think, is like a shark. You know? It has to constantly move forward or it dies. And I think what we got on our hands is a dead shark."  And what man does not recognize and appreciate the blunt honesty of Alvy saying,  "Don't knock masturbation! It's sex with someone I love." 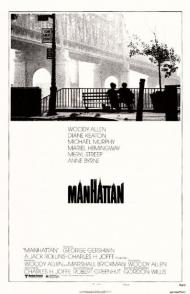 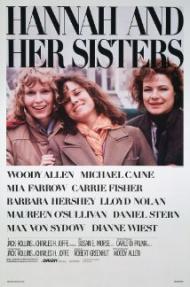