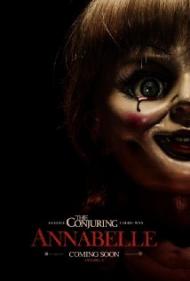 Having yet to watch The Conjuring, I was not sure how exactly Annabelle was related to it. I did some half ass online research and discovered that the doll is supposedly based on an actual Raggedy Ann doll now owned by Ed and Lorraine Warren, the main characters in The Conjuring. This film is intended as a type of prequel, taking place, I assume, in 1969 as the Charles Manson murders are being reported on the news.

John and Mia are an impossibly adorable young American couple. They attend church every Sunday. John is in his residency while a very pregnant Mia is a stay at home wife. Obviously they are a nod to Mia Farrow and John Cassavetes in Rosemary’s Baby (1968). The only personality trait either is given is that they are in love with each other. The only problem they seem to have is that becoming an actor, oops, I mean “doctor” takes up too much of John’s time. That is until John brings Mia home a gift.

The expectant mother has decorated their baby’s room with her collection of dolls that stare toward the cradle. That alone is enough to make any child grow up to need therapy, but I digress. John walks in with a gift that Mia has long wanted to complete her collection. It is a large, unattractive doll in a white dress. Mia places it among the others, practically ensuring her child’s psychotic future. Seriously, the only thing worse would have been a collection of clowns, anyway…

One night their home gets invaded by killers, who are members of a satanic cult. One of the devil worshippers dies while holding the doll, which somehow then creates a gateway for a demon to come through, using the doll as a conduit. Seriously, these things can happen.

Like many devils, this one knows to only mess with the wife and then only when her husband is away. I am not sure if they do that because women are more gullible or demons are scared of guys. But wait, that is not the only horror movie trope employed. Before you know it, Mia has befriended a wise older black woman. Ever since Scatman Crothers helped Danny in The Shining (1980), it has become a cliché for an elder African American to be available for just such emergencies.

Stereotypes aside, Annabelle provides some truly scary jump out of your seat moments. The doll never becomes anything as campy as Chucky from Child’s Play (1988) but her presence alone can make your stomach turn. Many times I found myself thinking, why does no one just burn that thing, but then it is best to never ask questions in a horror movie. If you have been experiencing scary supernatural shit, you wouldn’t think twice about going into a dark basement alone with only your weak flashlight, right?

Not everything makes sense or is explained. How did the demon come through? Why did it need a soul? Did it matter whose it took? How insane is it that an expectant mother still collects dolls? Again, just ignore common sense and let Annabelle lure you in for a scary, however warmed over, good time. 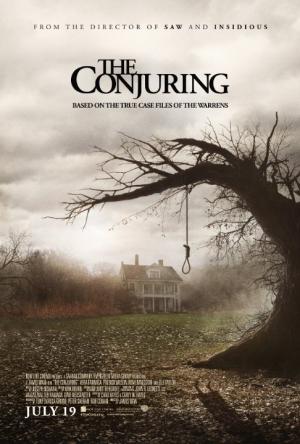