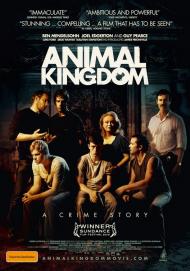 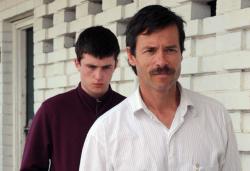 Animal Kingdom is the story of one crime ridden Australian family.  It's fairly gripping and tense with several shocking plot points, but lacks a central character you can really root for or empathize with.

The movie opens with Josh, a teenage boy, facing the death of his mother by overdose.  Not knowing what to do, he calls his estranged grandmother who welcomes him back into the family. Once settled in the family home, Josh learns that the family business is crime.  His four uncles are all criminals of varying degrees who have an ongoing feud with the police, who are just as violent as they are.  When one of the uncles is killed, the other brothers take their revenge.  When the police come to investigate, it is young Josh whom they target, banking on his youth as a way of breaking him.  This is one family though that you don't want to betray or even let them think that you might.  It's up to Josh to decide whether or not he will stand with the family or against it.

While Guy Pearce is the most recognizable face to American audiences, it is Jacki Weaver whose performance is getting all the attention.  As the matriarch to this fucked up family, Weaver does a great job.  Knowing that she was nominated for an Oscar as I watched, I kept waiting for her to deliver a big "Oscar" scene, but she doesn't really have that one big scene. It's much more subtle than that.  At first she just seems like everyone's sweet old grandmother, but by the end, she seems like the most dangerous person in a movie filled with violent psychopaths.  You definitely don't want to get on her bad side.

Ben Mendelsohn also does a good job as Pope, the most violent and insane of the brothers. He's one of those people whom you never know what they're going to do, but you just know they're capable of anything. You despise him and want to see him get what's coming to him, but he also holds your attention whenever he's on the screen.

Sadly, the worst performance is by James Frecheville, who plays Josh, the lead character. Josh is very passive, but Frecheville lacks any charisma and makes Jash bland to the point of dullness.  This is partly because of the way the character is written, but even given that, Frecheville is too unemotional and monotone in the part.

There are several violent twists in the film that I didn't see coming and I honestly didn't know how it was all going to end. At nearly two hours though, there is definitely room to tighten up the editing.

I was entertained by this movie and I wanted to see how it would end, but because of the lack of a central character I really cared about, I was never emotionally engaged by it and I certainly can't see myself ever wanting to watch it again.

Scott found the performance by James Frecheville to be the worst of the film. I disagree. He plays Josh as very passive and unemotional to the point of having some mental deficiency. The opening scene demonstrates that Josh may have some type of Asperger’s or autism going on. He is more interested in the game show than whether or not his mother may survive. It tells us straight off that Josh has both a troubled life and a severe lack of empathy.

Josh was intentionally written to not be an emotional character.  He is surrounded by larger than life assholes who have more problems than most people could deal with. If Josh reacted emotionally to all the death, drugs and crime going on around him, he would not survive. His instinct is to blend in and not bring attention to himself.

His problem is that his Uncles drag him into their harsh world and then the police decide to use him for information. He may be 17 and have a girlfriend but he seems more like an innocent child blindly thrust into a violent adult world. At one point he fruitlessly tells one of his uncles, “This has got nothing to do with me.” When his girlfriend asks why he likes her, he responds simply, yet honestly, “Because you’re nice.”

Josh has no clue just how much danger he is in. I strongly disagree with Scott. Animal Kingdom does not lack a central character to root or empathize with.  Look at when Josh is in the “safety” of police custody and the officer watching him asks menacingly, “You scared of me? That can’t feel to fucking good.” I rooted for Josh to get as far away from all of these idiots as possible.

Animal Kingdom starts slow but builds up to some great tension and drama. Look no further than when Josh gets chased off by his uncle and ends up crying in his girlfriend’s parent’s bathroom. In its own way, this is a coming of age story as the indifferent, childlike Josh must finally make a decision.

The only other performance that stood out was that of Jackie Weaver who reminded me of Margaret Wycherly as Ma Jarrett in the James Cagney classic White Heat (1949). Both are mothers who raised criminals and are willing to go down with them. She is like a devil presenting herself as an angel. Her line,"You'll be safe at home honey." Is the scariest in the film. With a grandma like her, poor Josh never had a chance.