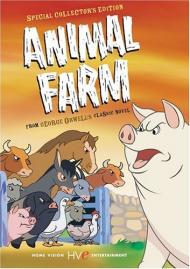 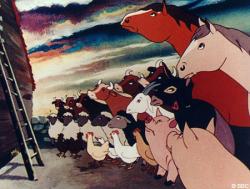 Having recently reread George Orwell's brilliant allegorical novel, Animal Farm, I thought I would give this 1954 animated adaptation a try.  It has an interesting legend attached to it.  Reportedly the CIA was looking to produce anti-communist propaganda in movies and so they bought the rights from Orwell's widow (with supposedly part of the deal being that the CIA would arrange for her to meet her idol, Clark Gable).  The depth of the CIA's connection has never been fully disclosed, because the government continues to decline Freedom of Information Act requests concerning the film.  The altered ending to the story certainly seems to support the idea.

Although there are subtle and not so subtle differences between the cartoon and the book, they both follow the same general plot.  Mr. Jones is a cruel and careless farmer.  One night his animals hold a meeting in his barn where the Old Major, an old and respected pig, gives an impassioned speech about the need for animals to rise up and overthrow their human masters.  His speech enflames the animals, but he cautions them that if they should ever accomplish this, they must never then become like men.  Shortly thereafter the old Major dies.

When a drunken Jones forgets to feed the animals one day, the revolt is sparked, led by the two pigs, Snowball and Napoleon.  Together they manage to take control of the farm with relative ease, but soon clash over who should lead the animals.  Things go well for the farm for a short while, but soon, the pigs, the smartest of the animals discover that old adage about all power corrupting.

The book ends with a classic scene and the rather chilling line, "The creatures outside looked
from pig to man, and from man to pig, and from pig to man again; but already it was impossible to say which was which."  The movie on the other hand, ends differently, it continues past that point to try and provide a more upbeat ending that is far less effective.

Of course, while that's the plot, the real underlying story of Animal Farm is the story of communist Russia.  Mr. Jones represents the Czar and the farm, Russia itself.  The Old Major is Karl Marx, Snowball is Trotsky and Napoleon is Stalin.  It's really the story of how a vision of utopia was twisted and corrupted by those in power until it became worse than the thing that was revolted against.  As a condemnation of communism, it's easy to see why the CIA in the early 1950s would love this book.

This animated adaptation is very disappointing.  This is an adult story, but the animators felt the need to throw in several cute and "funny" scenes of baby farm animals, which is about as far from the point of this story as you can get.  The dialogue has also been reduced, replaced instead by an avuncular narrator.   This has the effect of eliminating or drastically reducing the depth of personality of the animals.  In particular, my favorite character in the book, Benjamin the fatalistic and cynical Donkey who states that life at the very bottom of society is the same no matter what the government, has his personality changed completely.

I'm fairly certain no big screen version could ever live up to the book, but it certainly deserved a better attempt than this.  It should serve only as an introduction to the story 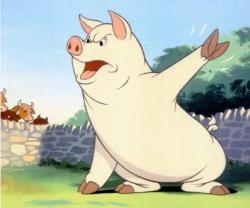 The noble but ill-fated Snowball in Animal Farm.

I last read Animal Farm in high school so the details of the book are a bit sketchy in my memory. This movie seems to get most of the important ones right. Although it does include a few scenes of cute baby farm animals it is also much more violent and political than your average cartoon, especially in 1954. In a way, this startling juxtaposition of image and content makes the story even more powerful. In fact the British Board of Film Classification initially gave it a film rating of “X” which prohibited anyone under 18 from being admitted to a theater where it was showing. It has since been reclassified.

The story remains a powerful cautionary tale of revolution. It points its finger equally at corrupt leaders as well as those that blindly follow said leaders. The highest ideals can easily turn to oppression if the populace fails to question the decisions of those in power, and they must have the courage to stand up against tyranny whenever and wherever it appears.

Although Boxer and Benjamin are simplified for this movie version, they remain the most emotionally effective characters. Benjamin's reaction to Boxer being sent to the glue factory is the most powerful moment in the entire story. Boxer represents the loyal worker who toils endlessly and unquestioningly for the greater good, but is really being taken advantage of due to his own gullible nature and lack of vigilance against fascism. As Scott mentioned, Benjamin the donkey loses his cynical edge from the novel. Although he does still play a crucial role in making the other animals realize they have simply traded masters and are no better off than they were under Mr. Jones.

The animation in Britain's very first theatrically released animated feature has the look of a Disney cartoon but the story being told is about as far from Bambi as you can get. I agree with Scott that the changes made to the ending dilute its impact. Although, as propaganda, the counter revolution theme is more uplifting and inspiring. Perhaps the CIA insisted on this alteration. 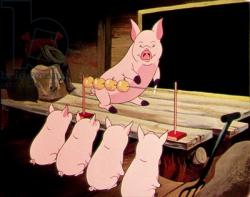 Education can be another form of manipulation.

Old Major's speech ends with, "Now and forever, all animals are equal."  The idea of equality has always been the selling point of communism.  It has been very effective on young minds, as who could possibly disagree that equality is good?

What the story of Animal Farm demonstrates is that equality is in truth an idea and not a fact.  Just as humans are unique, so are animals.  Some of us have physical strengths, some intellectual and others creative.  Some have grand aspirations while others are content with what they have.  Each animal has their own needs and wants.  The book demonstrates this when a mare asks Napoleon, "Will there still be sugar after the rebellion?" As soon as it is fully understood that we are all different, the idea of equality and thus Communism is challenged.

Snowball's electricity speech is very much that of a politician running for office.  Napoleon, as his opponent, takes out Snowball.  He steals his plans and assures the farm populace, "I'll protect your interests and I'll make your decisions."   Napoleon dictates the work schedule, with the muscular Boxer doing the lion's share.  Napoleon begins to trade the chicken's eggs with a human.  He maintains his authority with the viciousness of his dogs.  The pigs preached equality to get all the animals to work for a common goal, yet they use each of the animals unique talents to benefit the pigs.

As the leaders, Napoleon and the other pigs quickly decide to put themselves above the other animals by staying in the house.  Like politicians taking bribes, kick backs and making money from inside information, they act as if because they make the laws, the laws do not apply to them.  The pigs changing the law from "all animals are equal" to "some animals are more equal than others" is a blatant statement of how leaders can easily assume they are better than those they (supposedly) lead.

George Orwell understood a story condemning communism could be a dry read so he created an allegory that is just as condemning.  This film may have made a few changes, and the animation is lackluster, but its message of the frivolity of communism still comes across.  The foundation of Marxism, Socialism and Communism is the glorification of the notion of human equality.   Orwell, through this story, explains that in a world of leaders and followers, equality (Communism) is something that will never truly exist, and it is only the sheep of the world who think any leader can make it so.