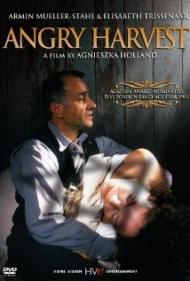 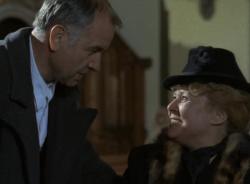 Leon is a lonely middle aged farmer.  His brother, whom he ran the farm with, has recently died.  He was once in a seminary, and remains a very devout catholic.  As a farmer, World War II has provided him with a steady income.  In one early scene he visits the former wealthy land owners that once employed him and his father.  They are now poor, while he gets along well enough.

One day he meets a starving woman, Rosa, in the woods near his home.  Rosa, her husband and daughter are Jews who jumped off a transport to a concentration camp, but became separated.  Rosa is ill, so Leon hides her in his basement while he nurses her back to health.

Leon is a well rounded character.  On one side he is compassionate, as he hides out a Jew, knowing it could cost him dearly.  On the other, he has profited by purchasing property cheaply that he knows once belonged to Jews.   Leon is both a flawed hero and a compassionate villain.

Leon's most human trait is that he is a man with natural urges.  Early in the film, he confesses to a priest that he masturbates all the time.   The priest suggests he get a wife.  A young attractive woman that works on his farm flirts constantly with him.  Leon is a virgin, and has no clue how to react to her.

While taking care of Rosa, he becomes comfortable with her, and wants to have sex.  It eventually happens making him happy and her complacent at best.  She asks him if he has heard any news of her husband.  He says he has not, even though he has.  Leon now sees a future with Rosa.  He needs to make her into a Catholic and wait for the war to end.  She has no desire to stay with him, but he is the only thing she has, a kind enough jailer, if you will.

Angry Harvest succeeds because of the character of Leon, and the performance of Mueller-Stahl.  He is despicable, yet kind hearted.  He is financially smart yet sexually naive.  After giving his virginity to Rosa, he feels confident enough to not only flirt back with the farm girl, but have sex with her as well.  Mueller-Stahl's performance demonstrates the subtle differences in a man with carnal knowledge and a man with none.

Rosa and Leon argue and makeup like an old married couple tired of each other's bull shit.   He expects her to change completely for him while she barely pretends to go along.  He wants her to become his wife, while she wants to feel the sun on her face.  The movie gets dark near the end with a disturbing moment.  The last scene reveals a happy ending, but not necessarily the one we, the audience, originally wanted.