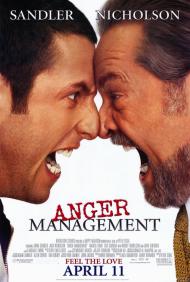 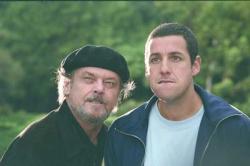 'Starring Jack Nicholson and Adam Sandler' is something I never thought I would see on a movie poster.  The combination of one of the greatest actors of his generation and the man responsible for Happy Gilmore and Mr. Deeds, seemed dubious at best.  I'm guessing that the producers of this movie are banking on the odd combination of these two to draw in the curiosity seekers.  However, despite the gimmick, it turns out that Anger Management is check your highbrow at the door, laugh-out-loud funny!

Dave Buznick (Sandler) is an executive assistant living in New York city.  As shown in nearly every preview for the movie, on a plane flight he is accused of becoming angry with a flight attendant to such a degree that the judge sentences him to Anger Management Therapy, where of course the therapist turns out to be Dr. Buddy Rydell (Nicholson), whose motto is kNOw Buddy Cares!  So much for set-up.  Despite its overplay in the previews, this is one of the funniest scenes in the movie.  I particularly enjoyed the airline staff's over-use of the phrase, "Sir, our country is going through a difficult time right now" as an excuse for everything.

Adam Sandler is a one-character actor, with the possible exception of his performance in Punch Drunk Love.  He is invariably the sweet, but immature guy who generally ends up punching somebody (which come to think of it, does include his character from Punch Drunk Love); just the sort of person who would be perfect for Anger Management Therapy.  At the beginning of this movie Dave is the exact opposite of a typical Sandler character, he is overly mild and diffident, and convinced that he doesn't belong with the other assorted angry characters that make up Buddy's circle of anger.  Buddy though, is able to show him that his problem isn't that he gets angry too quickly as is the case with the rest of the group, but that he never shows his anger at all.

When in a drunken and misguided moment, Dave ends up breaking a cocktail waitress's nose while trying to steal a blind-man's cane, he is further sentenced to thirty days of intensive anger management with Dr. Buddy.  This time the therapy includes Buddy moving in with him and following him around 24-hours a day.

While Sandler has some funny moments as the hapless Dave, it is Nicholson who steals the movie.  He may have already played the devil once, in The Witches of Eastwick, but now that he's a few years older, he looks even more impish and demonic as the puppet-master pulling Sandler's strings.  And his duet with Sandler on "I Feel Pretty" will stay with me for a long time.  If Jack needed an outlet for his wild side after playing the subdued Schmidt in About Schmidt, he couldn't have found a bigger one than this role.

Oh sure most of the humor here is crude, rude, and juvenile enough to make a 5-year old laugh, but so what?  Not every movie has to be high art, does it?  Surely we can all let our hair down long enough to enjoy seeing a Buddhist monk being given a wedgie can't we?

And while the movie is a bit obvious as we watch Dave traverse his Anger Therapy and try to win back the love of his fiancée (played by the always delightful Marisa Tomei), and the last ten minutes are way too corny, and by then Dave has become just your typical Sandler character, but does it really matter so long as we keep laughing?

''I feel pretty. Oh so pretty....'' If ever, there was ever a song that I didn't want stuck in my head it is that one. It is now firmly lodged there. Thanks to a potentially classic scene, it will be a while before I can get that melody out of my head. While driving over a New York bridge, Buddy pulls the emergency brake and stops the car. He then makes David sing every chorus. It is intended to relax Dave, and the final punch line is that it does. You just can't sing that song and be in a bad mood.

Ok, Scott did mention it was juvenile humor. He wasn't kidding. No matter what intellect level, if a movie can make me laugh it is good in my book.

Clearly the selling point for this movie is the combination of Sandler and Nicholson. They do make quite a funny comic pair even if the humor is of the very juvenile variety. Nicholson seems to relish the chance to play such broad comedy and he rises beautifully to the occasion. His presence makes this easily one of Adam Sandler's best movies. In fact, the entire cast is great, with many famous faces showing up in small roles.

As good as the supporting cast is though, it's the chemistry between Adam and Jack that carries the show. Their duet of “I Feel Pretty” is funny as hell. Eric, you called it a “potentially classic scene” and I agree. In fact I think you can now safely drop the “potentially” from that sentence. I knew Sandler was musically inclined but the amount of silly gusto Nicholson puts into his singing is a revelation.

Adam Sandler is sort of the Jerry Lewis of his generation. They both usually played hapless saps that are easy to relate to and they both appealed to mass audiences but were often ridiculed by critics. And Sandler, like Lewis, has a penchant for overly sentimental endings, like the one in this movie.

And though Nicholson steals Anger Management away from Sandler, Adam does have a few funny moments. He's probably the only comic that would think to confuse Emily Dickinson with Angie Dickinson. And he's good at physical comedy, like in the scene Scott mentioned where he breaks the cocktail waitress's nose while stealing the blind man's cane.

This movie came out in the spring of 2003, just a year and a half after September 11, 2001. The airline staff's behavior and the way they keep repeating the line Scott mentioned about how - “our country is going through a difficult time right now” - exemplifies, and spoofs, the nervous mood the country was experiencing in those years immediately following the terrorist attacks on 9/11. In another scene they make a point of showing lower Manhattan's skyline where the twin towers once stood. As of this writing, in the spring of 2012, One World Trade Center has just surpassed the Empire State Building as the tallest structure in New York. Finally, the cities' gaping wound is nearly healed.

Anger Management isn't a great movie but it is a classic comedy that has improved slightly with age.