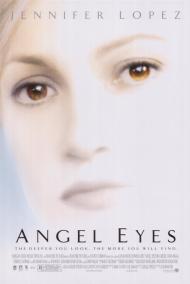 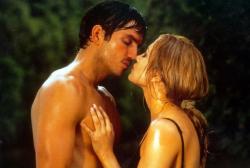 Jennifer Lopez isn't as completely a horrible actress as I thought she would be. That it isn't to say she is a good actress, by any means. She's not even a fair actress. I'm just saying that she isn't as completely, 100% bad as I thought she would be. Not that she is really given much material to work with in the heavy-handed, convoluted, family melo-drama; Angel Eyes. And trust me that is the last not completely bad thing I'm going to say about this movie.

Angel Eyes is the perfect example of a good premise executed poorly. It begins with a female police officer arriving at the scene of a horrible car accident. The camera angle is from the point of view of the victim and we aren't shown who it is. The next scene cuts to a year later where the same female officer is living her sad, lonely, life, estranged from her family, dateless, and relentlessly sexually harassed by both her fellow officers as well as the people she arrests. A dull, and lack-luster life. She is so bad at personal relationships, that even though this police officer bears a striking resemblance to Jennifer Lopez, she still can't get a date. Trust me, the movie is as dull as her life up to this point.

It begins to become intriguing, when a solitary stranger, dark and brooding, is shown wandering the streets of Chicago, except, instead of being sinister or menacing, he is performing simple acts of kindness and charity. He turns off someone's car lights, he points out to his neighbor that she has left her keys in the door. Part of his wanderings always bring him to somewhere near Jennifer Lopez. So much so, that if he hadn't been acting so goody-goody, I would have assumed he was stalking her. Instead, in the frame of mind of an M. Night Shimaylan movie, I began to assume he was a ghost trying to redeem himself or her guardian angel. The latter belief was strengthened when he throws himself upon someone who is about to shoot her. After this bravura rescue, the guardian and the guarded begin dating and of course fall in love.

That fifteen minutes or so centered around the rescue are the best minutes in the movie. From there onwards, the movie goes right back to being dull, dull, dull, with more than half the plot being taken up with the sub-plot of Jennifer Lopez's character dealing with her father issue (She arrested him after he beat up her mother and everyone in the family resents her for it, including her mother). And the rest of the movie takes an extraordinary amount of time to slowly reveal that the mysterious guardian isn't very mysterious, he's just an ordinary guy looking for redemption. And even though normally, I don't give away endings, I hated this movie so much, I'm going to give it away for this one. The man is of course, the victim of the car accident that Jennifer Lopez met at the beginning of the movie. His wife and son were in the car with him and they were both killed. He feels so guilty about it, that he's repressed all of his memories and now spends his time wandering Chicago looking to redeem himself. I'm worried that I might have made that situation sound more interesting than it really is.

James Caviezel, whom I quite liked in Frequency, plays the role of the guardian like a zombie. I know he's playing a man with some serious issues, but this monotone, dull, lifeless performance is just plain sad. And Lopez, unfortunately chose to try a role that required acting instead of just tits and ass, but to her credit, not even Meryl Streep could have made this character work. Well ok, maybe Meryl Streep could have, but J.Lo's got no chance.

The direction is shaky and uneven. The camera angle in the beginning which is supposed to be from the victim's point of view kept pulling back and moving around the scene, not cutting, actually moving away and then moving back, totally destroying what they were, I believe trying to set up, an accident seen totally from the victim's view. The lighting is all dull, grey, and lifeless and just generally leaves you with a feeling of BLEH.

Angel Eyes is not a movie for watching. It is a movie for passing by and avoiding. If you only don't see, one movie this summer. Be sure to not see Angel Eyes.