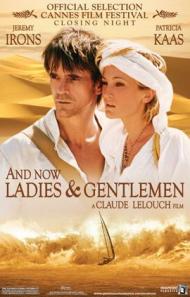 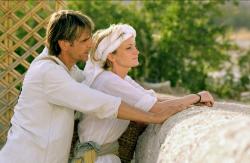 Jeremy Irons and Patricia Kaas in And Now Ladies & Gentlemen.

And Now Ladies & Gentlemen is a mystical, poetic love story from French filmmaker Claude Lelouch. He combines the use of flashbacks, dream sequences, music and interesting camera movement to tell the story of two lonely souls who find solace in each other. There is humor and adventure thrown in as well. The pace may be a bit slow for some people's tastes but this is an exquisitely shot movie that unfolds like a peaceful daydream.

Jeremy Irons is Valentin, an English jewel thief who uses disguises and cunning to pull of heists from some of Europe's greatest gem shops. Not only is Valentin a gentleman, he is also a thief with a conscious. He dreams of giving up his life of crime and of one day reimbursing those from whom he has stolen. Disillusioned with his life he sets sail from the south of France across the Mediterranean on his yacht 'Ladies & Gentlemen'.

Meanwhile nightclub singer Jane Lester (played by real life jazz chanteuse Patricia Kaas in her film debut) heads for Morocco in an attempt to get over a soured love affair with a trumpet player. She begins performing at a club in a Moroccan hotel but winds up in a medical office suffering from memory lapses after forgetting the lyrics to songs. Here she meets Valentin. He has crashed his yacht off the coast and is also suffering from amnesia. He's been forgetting merchandise he has stolen, or in some cases, that he has stolen at all. Together they find healing and love.

A sophisticated character driven vehicle that focuses on the joy and the melancholy of human relationships. Themes and emotions fuel the ride not plot devices. In other words this is a foreign film. Nothing coming out of Hollywood is this cerebral, this moody, or this free-floating. All of this adds up to make And Now Ladies & Gentlemen perfect counter programming in this season of the F/X driven 'Event' movie.