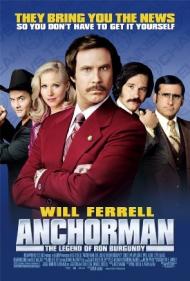 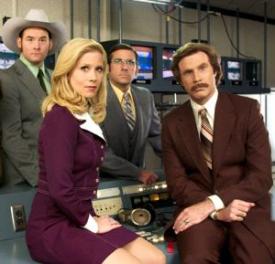 Move over Mike Myers, with the release of Anchorman: The Legend of Ron Burgundy, Will Ferrell has just stepped up the competition for the title of funniest former Saturday Night Live castmember working today. There hasn't been a movie this silly or funny since Austin Powers.

Ferrell stars as Burgundy, a local news Anchorman in San Diego at the top of his game at some point during the 1970s. The leader of a ragtag gang of news casting misfits, Burgundy is the king of his little corner of the world. When the station decides to add a little diversity to its news however, in the form of female reporter Veronica Corningstone (Applegate), that world is tipped upside down.

Sure, the plot is thin and at times feels like either a protracted SNL skit, or a series of short ones, but the jokes come so fast and so furious, that it doesn't matter. And the humor is so outrageous that it becomes almost Pythonesque. Particularly in the movie's funniest scene, which involves a street fight between Burgundy's news team and several rival channels. The scene is evocative of both West Side Story and Planet of the Apes and also involves a decapitation and death by trident.

While this is clearly Ferrell's movie -- he co-wrote as well as stars -- he has surrounded himself with very talented cast mates, a couple of whom nearly steal the movie. Steve Carrell as the very dimwitted weatherman is particularly hilarious. Apart from the supporting roles, there are celebrity cameos by Vince Vaughn, Luke Wilson, Ben Stiller, Tim Robbins, and a shockingly non-politically correct moment with Jack Black.

As a movie, Anchorman does have some weaknesses. The plot is weak and always takes a backseat to the jokes. There are some odd points, like when Burgundy meets and flirts with Corningstone the night before she begins working at the station, but then never acknowledges that they've met later in the movie. Also missing is a scene often showed in the previews of Burgundy and Corningstone proclaiming their love before leaping onto and crushing a desk. It makes me think that some last minute editing was done shortly before its release.

The humor is fairly sophomoric, it just happens to be incredibly funny sophomoric humor. Anyone expecting dry or subtle wit will want to stay away from this one, but anyone looking to laugh their ass off at the funniest movie of 2004, will not be disappointed. 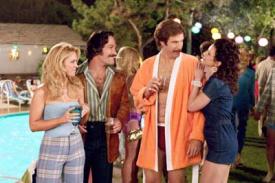 Paul Rudd and Will Ferrell in Anchorman.

It starts with a narrator's introduction, "There was a time before cable, a time when people believed everything they heard on TV. This was an age when only men were allowed to read the news." It is a funny way to set up the movie as well as a great slap to the egos of people like Dan Rather.

With all of the obvious bias in the mainstream media and all of the current cases of "journalistic" plagiarism, this movie could have had more jokes along that first line. The most political this movie gets is a predictable slam on Bush when the narrator says that the dimwitted weatherman, "is now a top advisor to the Bush Administration." Wow, a Hollywood movie making fun of a Republican; that is so original!

The movie is silly, as Scott wrote, and it never attempts to be any thing but. I second the motion that Carrell is the standout supporting character. He has some of the most absurdly funny lines. "Yeah, there were horses, and a man on fire, and I killed a guy with a trident!" Is one of my favorites.

Ferrell is the center of this movie and although he allows some supporting cast members to shine, listen closely to Fred Willard's phone conversations, Ferrell gets the most laughs. As a jogger, I particularly liked this line, "Oops... I almost forgot. I won't be able to make it fellas. Veronica and I are trying this new fad called uh, 'jogging'. I think it's 'jogging' or 'yogging'. It might be a soft 'j'. I'm not sure but apparently, you just run for an extended period of time. It's supposed to be wild."

Anchorman is funny in a very lowbrow way. With all the current media bias going on, I think Ferrell missed the opportunity to make this movie relevant as well as silly. It makes social comments on sexism from three decades ago, while missing so many chances to comment on the self-importance of today's anchormen and women. 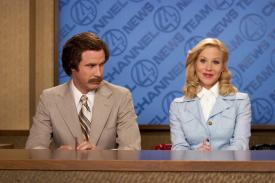 Will Ferrell and Christina Applegate in Anchorman.

Anchorman is much more absurdly silly than I expected it to be. It starts off like a traditional romantic comedy with the gimmick of being set in an exaggerated version of the 1970's. Soon, however, the movie leaves reality far behind and veers towards an Airplane like sense of goofiness.

While the movie is funny, I didn't enjoy it nearly as much as my brothers. Christina Applegate is good but her character is so annoyingly schizophrenic as to be completely unreal. She is on the one hand an ambitious and talented journalist, but she also sleeps with the unattractive and completely obnoxious Burgundy on their first date, whereupon she immediately falls in love with him. Then of course he must come to her rescue later in the movie. Although it gives lip service to women's equality by making fun of the fact that only men can read the news, in the reality of the movie the “girl" is there just to fulfill the same old tried and true male fantasy.

That said, one of the funniest moments in the movie does occur during the animated sex scene. When Ron points out the rainbow and Veronica squeals, “Do me on it!"

I agree that the supporting cast is funny, but Steve Carell's retarded weatherman was the least funny character in my opinion. Even as absurd as the movie gets Brick seems too far out there to work.

Anchorman will make you laugh, but with a better script it could have been a comedy classic. 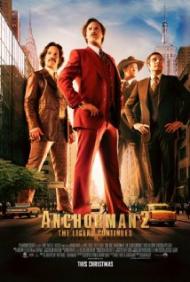