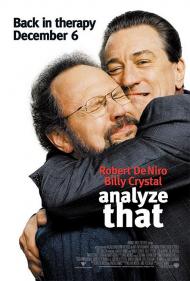 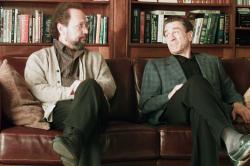 Billy Crystal and Robert De Niro in Analyze That.

And the winner of the most Disappointing Sequel of 2002 Award goes to Analyze That.  As with a great many sequels, a once original and fresh idea was trotted out, rehashed and just generally beat to death.  Its only redeeming features are its likable stars and the occasional joke that somehow manages to work despite all the things it has going against it.

Quite obviously, very little thought went into the writing of the script for this movie.  Somebody came up with the idea and then stopped there.  Even for such a broad comedy, this movie is filled with implausibility's and blatant plot holes.

We are expected to believe that Mob Boss Paul Vitti (DeNiro) would be released from prison into the care of Psychiatrist Ben Sobel (Crystal), whose home has been temporarily designated as a Federal Institution.  The reason for this is because there have been several  attempts to kill Paul Vitti in Prison.  Apparently it never occurred to the prison officials to just put him in solitary confinement.  All it takes to be released from prison and put into the custody of a friend according to this movie, is have someone try to kill you.  There's a tip to anybody who ends up in prison.  The real reason for this release is simply so that the two main characters can be thrown back together, but couldn't a little more thought have created a more believable reason?

Part of the condition of Vitti's release is that he find gainful employment.  What follows is a series of skits featuring the ex-mobster trying to do 'normal' jobs, such as a car salesman, restaurant host, and jeweler.

Finally, he ends up as a consultant on a television show called Little Caesar, an obvious Soprano's imitator.  Here, at last, comes a fresh idea and one ripe with comic potential.  A real mobster having to deal with a director with a background in Theater and a lead actor from Australia playing a Brooklyn Mafia Don.  Surely, there is some funny stuff that could be done with this material.  Well there might be, but you wouldn't know it from this movie since instead of going with funny stuff here, the plot veers off into a gold heist that brings with it a whole host of other implausible events.

To be completely fair, there are some funny moments in this movie.  The scenes with Vitti trying the different jobs is funny, but as I said, they're more like skits than having anything to do with the plot.  There's quite a few moments like that, pull them out of the movie and they're funny on their own, but they don't contribute to the movie.

I think the final problem with this movie, is that it is another in a long line of DeNiro playing against type in a comedy and the novelty has just worn off.  Before Showtime, and Analyze This, there was a kind of shock where you went, "Oh my god, I can't believe DeNiro, the greatest actor of his generation, is making a comedy!"  But that moment is long past now and if DeNiro wants to make a comedy, it better actually be funny if he expects people to laugh.