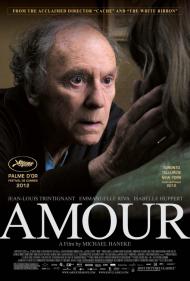 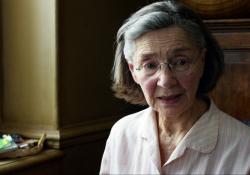 Bette Davis once said, as Patrick is fond of quoting, "Old age ain't no place for sissies." Her quote went through my head several times while watching Amour, as this multi-Oscar nominated film deals directly with the subject of old age. It's a sad, low-key story that features nice performances by its two leads, but isn't exactly high on entertainment.

There's not much in the way of plot here. Georges and Anne are an old, married, French couple who live in Paris. Anne suffers from a stroke and Georges takes care of her. That's all that happens. And yet somehow it still lasts two hours. There are no dramatics or tension, except perhaps for one scene near the end. Although there are several sad and emotional moments, none of them are over-the-top or melodramatic.

Writer/Director Michael Haneke based the script on a similar situation that happened in his own family. He directs with a leisurely pace, keeping the camera lingering on mundane objects and situations. He also occasionally chooses to leave the camera on odd subjects. For instance, when an former student of Anne's arrives to visit her, the camera remains on him as he awkwardly waits for Georges to go fetch her. With these techniques, he manages to give the film an artistic air.

The heart of the story is the love between Georges and Anne. It deals with issues of life, death, love and old age. It will force you to confront your own impending old age and make you think about what you might want out of it. You may also wonder what you do in a similar situation, when the love of your life is deteriorating right in front of you.

With its very limited cast and a single setting (apart from one brief opening scene), there's very much a play like feel to this movie. All of the "action" takes place inside the old couple's apartment.

Although there are many different reasons to watch movies, the main reason I do it is to be entertained. This is not an entertaining movie. As I thought about my own old age as I watched it, part of me was thinking, “Life is precious. Do I really want to spend even a small percentage of it watching this sad movie?” If it hadn't been nominated for several Oscars, I wouldn't have watched it at all. I certainly have no desire to ever watch it again.

Like it did for Scott, this movie brought to mind a famous quote. I forget who the witty person was that first said it (Maybe Oscar Wilde?) but I believe it was originally a paraphrase of something from Shakespeare. “Life is like a decent play with a bad third act.” Meaning the final curtain for each of us is death, that quietly sinister fellow waiting patiently in the wings. Amour tells of how one couple meets death with practical dignity and steadfast loyalty.

Yes, Amour is a sad story about an elderly couple facing the end of their life together. Given the subject matter it isn't exactly a fun watch but it is very well-made. In this writer/director's competent hands Amour lives up to its title by painting an incredibly moving portrait of one couple's enduring love. It may not have any over the top, drama filled scenes but it has several quietly dramatic moments that leave a strong impression on the viewer. I was never bored watching this poignant end-of-life story.

The two leads are both wonderfully moving. I'm a bit surprised that Emmanuelle Riva was Oscar nominated while Jean-Louis Trintignant was overlooked. Riva gets the showier role. She has to believably play a woman suffering the debilitating aftereffects of a major stroke. She does a great job, especially in the early scenes where she goes in and out of lucidity.

Still Trintignant, for my money, has the more difficult role. His wife's helplessness and impending mortality bring him face to face with his own shortcomings. He feels guilty about his selfish -often domineering- behavior during their life together. Making his wife's end as painless and comfortable as possible is all he has to make up for being the bastard he sometimes was to her.

The script gives us insight into their life together. At one point Anne tells him, “You are a monster sometimes.” She doesn't say it in anger, it is more like she is stating a simple fact. Clearly it wasn't always a happy marriage but they worked through whatever problems they had and made it to the end of their race together.

The final ten minutes is heart-wrenching. Watching them symbolically head out their apartment door for the last time together is the one moment of the film that gets overtly sentimental. I must admit I brushed a few tears from my eyes watching it. Amour is a powerful -if difficult to watch- film that looks death squarely in the eye.

I would like to stay healthy until my death comes at an old age. If I had my way I would simply go to sleep one night in my own bed and never wake up.  It is probably how most people would like to go. However, life, as my brothers wrote, does not have a very funny punch line. Most of our lives will end with slow discomfort. At best, if we are fortunate, we will have a loved one with us to see us through.

That is the beauty in the love story of Amour. So many romantic films feature attractive young to middle aged people who meet, laugh and fornicate like crazy. That's easy love. That is uncomplicated love, even though the people in question may likely say otherwise. Being in love when you are young is little more than the happiness that you find with another person. Love must change when you and your partner are old. Passion, I am guessing, is replaced by familiarity. After a lifetime together I imagine one must look at their spouse as an extension of themselves in such a way that they do not even recognize that they are two separate humans.

Unlike my brothers, I did not see the story of Georges and Anne as sad. Sure, the movie starts with the discovery of Anne's corpse, but she is lying in her bed with flowers placed around her head by Georges. Going into the story, we know the ending. What we witness then is a love between two people who are fully aware that their time together is quickly coming to an end. Their dedication to each other is endearing. He will do anything for her, while she does not want to be a burden to him.

This is not a sad story. A sad story would be watching Anne die alone. Every time Georges helped Anne up, I smiled. How wonderful for her to have him be there for her. He does all of this out of love. Young couples bribe each other with sex or material items. George is not looking for any reward, other than more time with his wife. His dedication to her is love defined.

Scott did not like the long takes the director employed, while I enjoyed them. Lots of editing diminishes an actors performance. Let the camera linger. However, I agree with Scott that the length of this film is unforgivable. So little happens, that the story could have been told in half the time. After awhile I felt like I was suffering right along with Georges. The bittersweet ending could have broke my heart if I had not been so anxious about it coming.