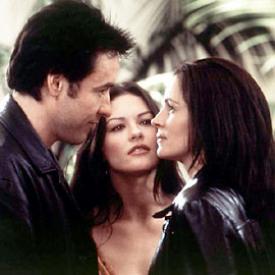 In America's Sweethearts, Billy Crystal's character is a man on a mission. A mission to publicize a movie that is being held hostage by it's director (Christopher Walken). Without an actual movie, he must use the one weapon in his arsenal, America's infatuation with the movies once married leads, played by John Cusack and Catherine Zeta-Jones. Now divorced, the couple have gone their separate ways. John Cusack is searching for spiritual enlightenment at a retreat, while Catherine is now shacked up with Hector, Hank Azaria with a very strong Spanish accent. In order to make the public, and the press, believe the couple might be reconciling, a press junket is set up with the stated purpose of screening the film, but with the actual purpose of allowing Billy Crystal to orchestrate scenes which he can then leak to the press, showing America's Sweethearts in compromising positions. Along for the ride is Kiki, played by Julia Roberts, Catherine's sister, assistant, and nursemaid. She's there to complicate matters by being in love with John. And it's her presence, along with Christopher Walken, as the deranged director, that causes Billy's crystal clear plan to go slightly awry.

Intended to be a wacky, but sweet, romantic comedy, America's Sweethearts manages both of those things, but only enough to make it entertaining. It never achieves the truly classic status, that a movie with this cast could easily have done. It works best when it's going for straight laughs. Billy Crystal's negotiations between Catherine and John as to who will arrive at the Junket first and his race between the limousines, showcases the best moments and themes this movie has to offer. When it is casting a sly, mischievous inside look at the movie business and the people who publicize them, is when this movie is at it's smartest and most amusing.

When it comes to the romantic side of the film, that's when the cracks in the movie show. It is easy to understand why Julia's character loves John's, but the cause of his sudden turn-around is never really explained. It's merely a case of movie love. You know, when suddenly two characters are in love and you're not supposed to question it, you just have to accept it. What's missing is that one tender, scene where you just go, 'Awwww', and a tear comes to your eye. It's like When Harry Met Sally without the final New Years Eve scene, or Casablanca without the airport scene. It's missing something.

The cast is great and are responsible for this movie being as good as it is. Catherine plays her part to perfection as the old style, spoiled , high-maintenance, glamorous, movie star. John Cusack is also good as the befuddled, love-sotted, ex-husband who once again is receiving psychological help from a character played by Alan Arkin (as he was in Gross Pointe Blank). Julia Roberts? Well, Julia Roberts is Julia Roberts. If you're a fan of hers, which I am not, you will love her in this movie, even I managed to enjoy her in it. Her moments in the fat suit were entertaining enough. And finally, Billy Crystal, also the co-writer of this film and originally slated to play the lead, before the movie was delayed for a few years, gets some of the funniest lines as the sly movie publicist who is working to get his job back. Even the smaller roles are filled with talented actors. Hank Azaria does a terrific turn as Hector. His accent alone is almost worth the price of admission. All in all, a funny, charming, and talented cast who manage to lift this movie above itself.

Given the slim pickings of Romantic Comedies this summer, I can not help but recommend America's Sweethearts as a great date movie, even though, it's a better comedy than a love story. 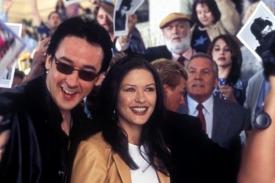 As Scott said America's Sweethearts is an entertaining romantic comedy with a superlative cast. Rather than simply mirror his review I will instead only mention points on which we disagree.

First of all, he needs to get over whatever it is that is causing his inexplicable aversion to Julia Roberts. She is a talented comedienne, decent dramatic actress and an incredibly charismatic and unique movie star, as the rest of the universe obviously already knows. Scott's inability to appreciate her on almost any level is both mystifying and annoying. Here she allows herself to play the unglamorous one, but in the end still manages to get her man.

Secondly, I thought the romantic angle, though not classic by any means, worked fairly well as scripted. Eddie Thomas (Cusack) has every reason to love Kiki; it is not until the torch he is carrying for Gwen (Zeta-Jones) burns out that he can see this. After all who can see a match when juxtaposed against the sun?

My third and final point is not really a disagreement but rather just a shallow little detail I would like to bring up. Namely the fact that Billy Crystal, although he is quite amusing in the movie and seems to have found his niche as a supporting player instead of the lead which he was never really suited for, is in the middle of aging very badly. C'mon you're a major star, please spend the money to look like one.

Oh and before I forget Christopher Walken steals the show as the eccentric-to-the-extreme director and the footage of his 'movie' is certainly the comic highpoint of America's Sweethearts. 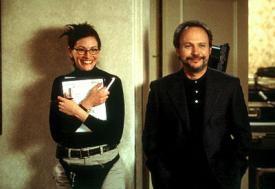 America's Sweethearts is supposed to be a satire of the movie industry and the people who work for it. Unfortunately I felt everyone in the film played their parts to straight. Greedy producers and self centered stars; yeah, I bet no one in Hollywood is really like that!

In Young Frankenstein, the best satire ever, Mel Brooks and Gene Wilder poke fun at the old Frankenstein movies. Characters are exaggerated and situations made absurd. At no point do you take any of it seriously and you laugh your ass off.

America's Sweethearts has Gwen Harrison, played by Catherine Zeta-Jones, a spoiled arrogant star who in one scene sincerely confesses that her major flaw is that she always thinks of others. This is of course supposed to be a joke but its delivery is flat. Catherine, you're gorgeous but Madeline Kahn you ain't.

Stanley Tucci and Billy Crystal play producer and publicist who are pushing a film they have yet to see. They betray the stars every chance they get to help publicize the movie. Considering that recently studios have been creating fictitious critics to create complimentary quotes to put on posters of their lousy movies it is not hard to imagine that their are people in Hollywood that would do what these characters in the movie do.

Julia Roberts plays Kiki, the one and only sympathetic character in the movie. I disagree with Scott's opinion on John Cusack's characters sudden change of heart. He always had feelings for Kiki. When he sees her at the hotel and she tells him she lost weight he responds with a sincere smile that she always looked good. As for the kiss and romantic night they share, Scott. The scenes preceding it show how everyone wants something from him. When he is with Kiki he realizes that she is the only one who doesn't. The scene where Julia Roberts is in the kitchen waiting for Cusack to answer the question, posed by Gwen, 'Are you seeing someone?', is my favorite.

As both my brothers have pointed out this is one star filled movie, and that alone is its saving grace. Next time Billy, remember that spoofs and satires stretch the truth and exaggerate the characters and situations. Putting two divorced movie stars in a potentially odd situation to promote a movie is not far fetched. On the same day that their divorce was finalized Tom Cruise and Nicole Kidman attended the premiere of the movie The Others. Kidman stars and Cruise produced it.