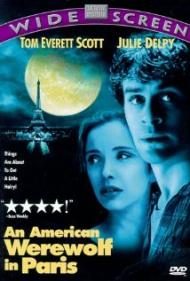 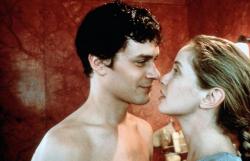 An American Werewolf in London was not only a financial success but was also the very first film to win an Academy Award for best makeup. John Landis wrote a sequel to his 1981 hit and was the original choice to direct the sequel. Unfortunately, the idea lingered for years until someone else’s screenplay was used and another director stepped in. One of the worst changes though, was that the werewolves went from makeup covered actors to computer animation. As this movie was made in 1997, the CGI is amateur for the time and just plain horrible by today’s standards.

Instead of two yanks hitchhiking in Great Britain, we have three young American men who meet and stop a French woman, Serafine, from jumping off the Eifel Tower and killing herself. One of the men, Andy, becomes smitten with her and seeks her out. The only problem is that she is a werewolf who is part of a group of lycanthrope that throws parties for tourists that turn into smorgasbords.

Claude, an associate of Serafine, invites Andy and his friends to one such party. One of his friends gets killed, the other captured, while Andy gets bit by a werewolf. Dogs suddenly take a liking to him. He craves meat and finds that his senses are greatly enhanced. His libido goes into overdrive as he can literally smell poontang. One of the funniest scenes is when Andy wakes the next morning after his first change. He is lying naked next to a dead dog whose legs are spread wide.

Andy’s dead friend returns as a ghost zombie and informs him that he can change things if he eats the heart of the werewolf that turned him.  Claude meanwhile, and his fellow lycanthrope, has a drug that allows them to change at will, without waiting for a full moon. They throw another party for tourists where Claude announces, “I love Americans. You all have a good taste.”

This film is only vaguely connected to the original. It is, at best, implied that Serafines mother may be the English nurse from the first film. It hardly matters either way. The plot here is simple and none too complicated. A pack of werewolves eat tourists in Paris, while a recently turned falls in love with a chick werewolf. London had much better atmosphere, starting on the moors and ending in London at night. Here there is too much time spent in sewers and old buildings. The sets look like they belong more in a mummy movie.

The most notable difference between movies is the depiction of the werewolves themselves. In London we only got glimpses of the creature. Here the werewolves get much more screen time, which does allow for more action scenes. The problem is that the brief glances of the werewolf in London were far more realistic and scary than the CGI monsters shown here.

A young Tom Everett Scott was often compared to Tom Hanks. Not only was there a resemblance but Scott also had a friendly, likable screen persona. As soon as Andy tells his friends that he is interested in love and not just sex, we know he is the good guy to root for. Although she had been working for years in Europe, this was the movie, unfortunately, that many Americans first took note of Julie Delpy. Okay, a small audience enjoyed Before Sunrise (1995) but that film has grown in status while this was the bigger hit in its initial release. She does a brief topless scene, something she has always been comfortable with doing. Her acting career has maintained a steady pace while Scott’s has been reduced to supporting roles and television work. 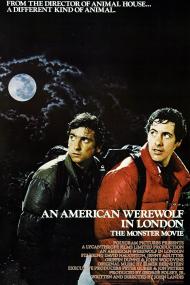