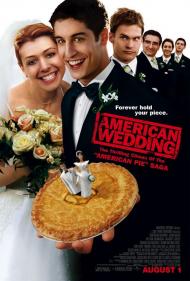 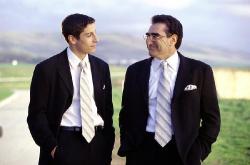 American Wedding finds Jim and Michelle getting married. Jim's Dad continues to give out advice that Jim would rather not hear. Most importantly, Steve Stifler is still hanging around to annoy the rest of the characters and amuse the audience.

Minus a few of the original characters, Jim and friends set out to make the wedding special for Michelle. Lucky for the audience, Stifler forces his way into the wedding. Sure, the rest of the people in this movie hate him but he is the brightest live wire of the bunch.

The group of friends find themselves in a Chicago gay nightclub, looking for a dressmaker. Foul-mouthed Stifler offends several homosexuals when it finally dawns on him that he is not in a straight bar. The gay men in turn offend Stifler's ego by saying they aren't attracted to him any way. Stifler then engages in a dance off contest with one of the gay men to prove that they really do want to fuck him.

From Jim's pubic hair coating the wedding cake, to Stifler eating dog shit, this movie goes to the bathroom for many of its jokes. What gives this movie a bit of a lift is the relationship between Jim and his Dad. As in the other movies, Jim's Dad always ends up telling embarrassing stories in an inept attempt to help Jim. By the end of this movie, Jim and his Dad have bonded in a way that shows Jim at least appreciates his Dad efforts if not the results.

The first movie was about Jim losing his virginity. The second, and definitely the weakest, is about Jim falling in love. This one is about Jim finally becoming his own man. Even Stifler, amid using the "F" word every other sentence, grows and learns a little about friendship. This installment won't create any new fans of the series, but it is a decent way to finish off the trilogy. 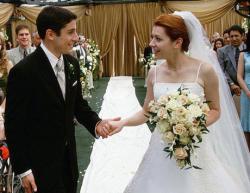 Eric seems to have found Seann William Scott's portrayal of Stifler to be one of the best things about The American Pie series. I couldn't disagree more. While he does provoke some laughs, personally I found Stifler to be the most annoying character in the movies (and not annoying in a good way).

I also disagree with Eric when he says that American Pie 2 is the weakest of the three. I found American Wedding to be the weakest by far. The lack of the Chris Klein character upsets the balance horribly. In the first two movies, he acted as a counter-balance to Stifler. He was the guy who you knew could kick Stifler's ass if it needed kicking. Without that balance, Stifler runs wild in this movie and the reason for his even being here is tenuous at best. Are you telling me, Jim couldn't have just hired a dance instructor instead of getting Stifler to teach him? It's such a ridiculously thin excuse to get Stifler to the wedding that it's completely unbelievable.

One area that I do agree with Eric about is the relationship between Jim and his Dad. You can laugh, but I always thought the best thing about these movies wasn't the vulgar and lowbrow humor, but rather the heart that beat just below the surface, as exemplified by Jim's relationship with his Dad. Their chemistry together, aided by the fact that Jason Biggs actually looks like he could be Eugene Levy's son, helps make their scenes together the best in the series. Jim's Dad always manages to be there for Jim when he needs him, usually embarrassing him horribly in the process, but he's always there for him.

However, I do disagree with Eric again, when he calls this a decent finish to the trilogy. I actually thought this was a cheap excuse to try and drag some more money out of a once funny series by throwing together something that emphasizes its weakest points and lacks three of the main characters from the earlier two movies without ever explaining where they went. If they couldn't do the movie with the full cast, they shouldn't have done it all. 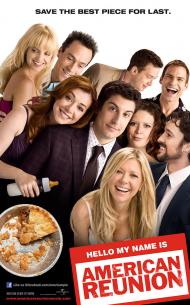