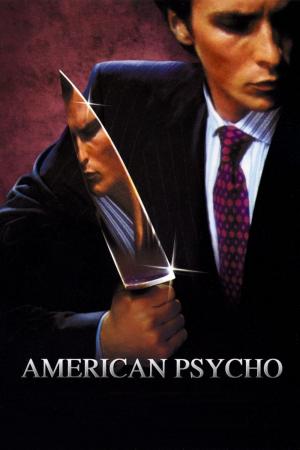 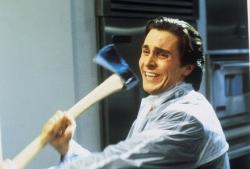 Every decade has a cliche about its young people, whether they are accurate or not. The 1950's was about innocence and the birth of rock-n-roll. The 1960's was about rebellion and protest. The 1970's was Disco and drugs. The 1980's reputation was money and greed. American Psycho takes all of the cliches of the Reagan decade and runs with them.

Bale plays Patrick Bateman, a wall street money man. To be more accurate, he is a very self absorbed arrogant money man, "My name is Patrick Bateman. I'm 27 years old. I believe in taking care of myself and a balanced diet and rigorous exercise routine. In the morning if my face is a little puffy I'll put on an ice pack while doing stomach crunches. I can do 1000 now. After I remove the ice pack I use a deep pore cleanser lotion. In the shower I use a water activated gel cleanser, then a honey almond body scrub, and on the face an exfoliating gel scrub. Then I apply an herb-mint facial mask which I leave on for 10 minutes while I prepare the rest of my routine. I always use an after shave lotion with little or no alcohol, because alcohol dries your face out and makes you look older. Then moisturizer, then an anti-aging eye balm followed by a final moisturizing protective lotion."

Patrick is very insecure. The most telling scene is when he is in a board room with a bunch of other suits and they are all comparing business cards in minuted detail. Patrick burns with jealousy as someone pulls out a card better than his. He always compares himself to other people. "Marcus and I even go to the same barber, although I have a slightly better haircut." Another time he goes into a co-workers apartment and says, "There is a moment of sheer panic when I realize that Paul's apartment overlooks the park... and is obviously more expensive than mine."

Patrick has a fiancé, Evelyn, that he really cares little for. She is played by Reese Witherspoon, who seems to be auditioning for Elle in Legally Blonde. At one point, Patrick says to her, "I don't think we should see each other." The emotionally uninvolved Evelyn Responds nonchalantly, "But your friends are my friends and my friends are your friends. I don't think it would work."

So what does this self absorbed yuppy do with all of his frustrations and pent up feelings of inadequacies? He murders people. He hacks them up. He kills with the driest sense of humor. He tells one disbelieving girl, "You're a fucking ugly bitch. I want to stab you to death, and then play around with your blood." He invites a co-worker, that he is jealous of, over to his apartment that has newspaper on the floor and then proceeds to put a raincoat on, all the while discussing his fondness for Huey Lewis and the News.

Patrick has a habit of talking about pop music when he is in a lascivious mood. In one scene he is talking about Phil Collins and Genesis while giving instructions to two girls he is video taping and about to have sex with. "In Too Deep is the most moving pop song of the 1980s, about monogamy and commitment. The song is extremely uplifting. Their lyrics are as positive and affirmative as anything I've heard in rock. Christy, get down on your knees so Sabrina can see your asshole. Phil Collins' solo career seems to be more commercial and therefore more satisfying, in a narrower way. Especially songs like In the Air Tonight and Against All Odds. Sabrina, don't just stare at it, eat it."

The book, this movie is based on, made a social impact on the literary world as the liberal media thought it gave some gruesome insight into the stressed lives of 1980's Reaganites. The movie, however, made little to no impact. Perhaps it was a lack of interest in the "me" decade or the very mature scenes of sex and violence. I think it was the twist ending. When a movie has a surprise ending it is supposed to add to the film, not take away. This movie is worth seeing for Bale's performance and the dark humor, but the ending ruined the entire plot for me. 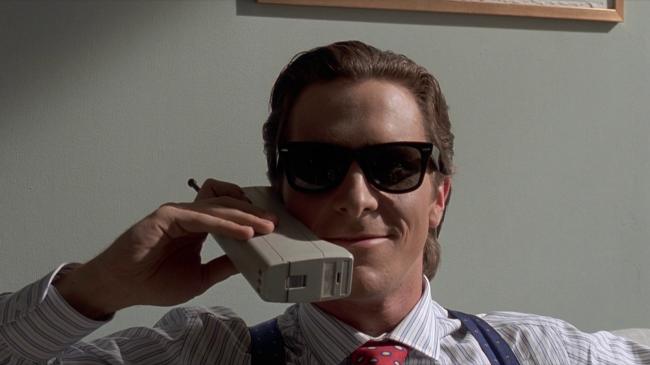 The first time I watched American Psycho I didn't get it. I was so bothered by the central character's disturbing blood-lust, I missed the fact that this is a sharply written horror/comedy satirizing capitalism, rampant consumerism, and yuppie conformity. It features several disgusting yet hilarious moments. It was based on the controversial 1991 novel by Bret Easton Ellis, which was criticized for its detailed descriptions of violence, particularly of the misogynistic type.

Made in 2000, this movie recreates the 1980s with a fond nostalgia that belies the gruesome content of the story. The script is littered with references to 1980s pop-culture from The Cosby Show, "I have a meeting with Cliff Huxtable" to a repeated line Patrick uses whenever he needs to make a quick exit, “I have to return some videotapes.” The music of such iconic 80's acts as The Cure and New Order add to the nostalgia. Patrick's theories about pop-music, that Eric mentioned, are quite funny.

The ambiguous ending that Eric disliked, is foreshadowed several times. First of all there is a common theme throughout the film where characters mistake other characters for other people. But then all of these young Wall Street types do seem to dress and act alike. They go out to trendy clubs where they snort copious amounts of cocaine while critiquing other club-goers' outfits and arguing over office etiquette.

But Patrick Bateman (Norman Bates?) is different. Patrick is beyond narcissism. He's an empty shell of a man with a dark secret. Here's how he describes himself. “I have all the characteristics of a human being: blood, flesh, skin, hair; but not a single, clear, identifiable emotion, except for greed and disgust.” Patrick lives in a world interested only in surfaces, so his secret is never suspected.

Patrick narrates the movie, but is he a reliable narrator? In addition to the identity confusion, people sometimes misunderstand each other. Patrick has a habit of fantasizing about speaking his true feelings in public. In one scene he mutters to a bartender, “I like to dissect girls. Did you know I'm utterly insane?” Sometimes people hear what they want to hear. Patrick mentions “murders and executions” but the person he's speaking to hears “mergers and acquisitions”.

American Psycho isn't for everyone. It contains some seriously disturbing images. Christian Bale's a gleeful vampire as Patrick Bateman, especially in the scenes where he lets his blood-lust run amok. The scene with Jared Leto is one of the best in the movie. Watch how much Patrick enjoys the anticipation of the slaughter to come.

The ending can be taken several different ways. I thought it was more effectively done than in Fight Club. Like that movie, American Psycho has developed a cult following over the years. I agree with Eric that Bale's performance is worth seeing and there's plenty of hilarious dark humor on display. I disagree with him about the ending, which I thought rather brilliant. 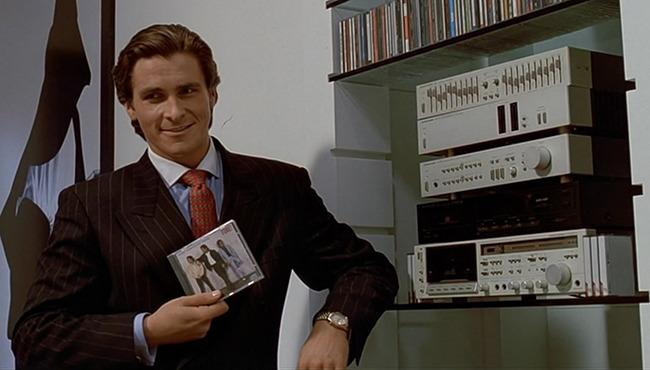 Writer/director Mary Harron has said that she's disappointed in her own ending and that she never meant it to be quite so ambiguous. There's a great deal of debate easily available online surrounding the ending, but funnily enough I didn't see the ending as ambiguous at all. To me, it's obvious (and this goes against what Mary Harron has said was her intention) that SPOILER ALERT all of the murders take place inside Patrick Bateman's mind. The cleanliness of Paul Allen's vacated apartment, the contents of his notebook as discovered by his secretary Jean, and Bateman's increasingly outrageous behavior (blowing up a police car with just a handgun) all point to the murders merely being figments of Bateman's imagination. This interpretation of the ending makes the most sense and adds another layer to Bateman's character.

So much discussion has taken place around the ending of the movie that it has grown in importance. This is at heart a black comedy and therefore I don't think the ending is actually all that important. As Patrick said, this is a satire on capitalism, consumerism, and especially yuppie conformity. These guys dress alike, wear their hair alike, talk alike, and behave so much alike that none of them can seem to keep each other straight. This is a skewering of excess among the rich and fashionable and the insecurity that feeds their behavior.  The stinging wit behind it all is the key to the movie as not much is meant to be taken seriously, which is why I think the ending isn't as important as it first seems. This is a comedy first and horror movie second.

Christian Bale is great as Bateman. He plays his vanities and insecurities perfectly. He's on top of the world and desperate to stay there, but constantly feels as though others are further up than he is. He's also in phenomenal physical shape, something that Harron shows off constantly. The other performances are fine, but this is strictly a one man show and Bale plays it full tilt and no-holds barred. And while it's hard to picture anyone else in the part, the role nearly went to Leonardo DiCaprio before he bailed out. It wouldn't be until over a decade later that DiCaprio played a similar, if less murdery, role in The Wolf of Wall Street.

One of the biggest problems with the movie is that Bateman is a detestable character. Even before his first victim (real or imagined) is shown, you already hate this guy for his shallow vanity. I can't think of a less sympathetic character in the history of the movies. He's occasionally funny in a dark and twisted way, particularly during his pop music monologues, but never did I feel anything but disgust or revulsion for him. There have been plenty of other movies with a criminal as the lead character where the writers and director have managed to create some kind of sympathy for their lead despite their crimes, but that isn't the case here. This is why, although I enjoyed it for the most part, I can't ever really imagine wanting to watch this movie a second time. Patrick Bateman isn't someone that it's enjoyable to spend time with.