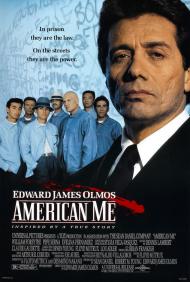 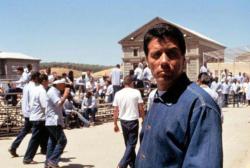 Edward James Olmos in American Me.

American Me tells the story of the rise of the Mexican Mafia in the California prison system from the 1950s to the 1980s. Produced, directed and starring Edward James Olmos, American Me offers a brutal look at life behind bars. Based on real people, this movie offended many members of the Mexican Mafia, mostly due to one scene where their revered founder is shown being forcibly raped as a teenager. According to 60 Minutes three men who acted as consultants on the movie were later killed over this scene.

The story begins during WWII and the infamous Zoot Suit Riots in Los Angeles between white American sailors and local Hispanic citizens. The story then jumps ahead to 1959. Montoya Santana is a teenager hanging out with his two best friends when they find themselves in the wrong place at the wrong time and get arrested. Once in Juvenile Hall the aforementioned rape scene occurs (the rapist is played by Eric Close). Santana murders his raper and thus winds up being transferred to Folsom State Prison upon turning 18.

We witness his rise to the top of the prisoner chain of command. He is a ruthless but fair minded leader. The movie doesn't pull any punches in its depiction of his crimes. This is a man who has spent most of his life behind bars. Once he is finally released he tries to adapt to life on the outside but he knows nothing of the modern world he finds himself in. Here he is a thirty-something year old man and he has never had sex with -or even danced with- a woman before. I won't give away his ultimate fate but as this is a cautionary tale don't expect a happy ending.

The direction by Olmos drags a bit. A slightly tighter edit would have helped this somewhat overlong movie. The cast is pretty good though. For realism Olmos used many real-life prisoners as extras. It certainly has an authentic feel to it. American Me (short for American Mexican) will make you terrified at the idea of being incarcerated. It is like one of those old Scared Straight shows on television. American Me offers a bleak, brutal look at life behind bars, where life is cheap and violence a matter of survival. This one's not for the squeamish. 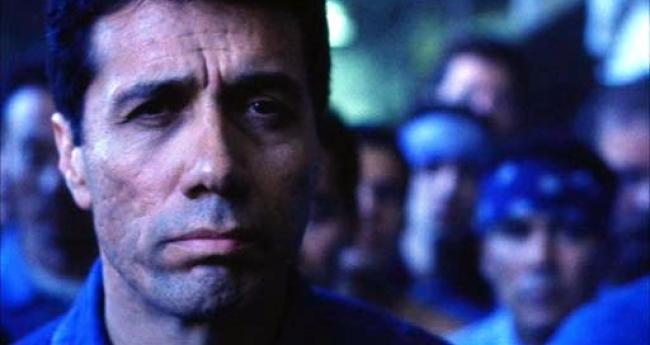 Edward James Olmos in American Me

At first, I had a difficult time relating to American Me and most importantly the main character, Santana. We first meet him in prison and then he narrates us back to his youth. He is a criminal and so I had very little pity for him. I dreaded the idea of spending the next two hours watching a film about a despicable person. Although I never came to actually liking him, about half way through I began to at least understand why he became who he did.

This story is based on real life gangster Roldolfo Cadena. The rape scene may have offended some of his worshipers, who felt it was somehow an insult to show that happening to him but Santana truly comes out of that scene a man. He immediately attacks his rapist and that decision sets him on a path of not taking shit from anyone else. In real life, the story goes that a large African American kissed Cadena as he first entered the prison yard and announced that he was now his bitch. Cadena left, returned shortly and stabbed the man to death, sending a clear message to everyone else.

Either way, I began to sympathize a bit with him when he met Julie and was suddenly scared to talk to her. This man killed and had men killed but facing a woman made him completely nervous. Suddenly he was a teenage virgin facing a MILF. For a brief time, she humanized him. He started to care for someone else who would not, in any way, benefit his gang. Not since his mother, had he liked someone who was not in some way related to his illegal endeavors. Unfortunately, the romance never develops into something big enough to change Santana's ways.

Patrick aptly called this movie a cautionary tale and above all else, that is the theme that rings the most true. Violence begets violence. We see, step by step, how Santana became who he did. His father neglected him. He hang out with other bored unsupervised boys, testing their limits at every chance until some stupid decisions got them arrested. Cadena actually first went to prison for stabbing a man to death. When Santana is out of prison we see a new generation of bored boys seeking thrills through drugs, emulating gangs and hoping for their acceptance. Santana takes note of all of this and for a brief time we think, and hope, that maybe he will try to make some positive changes. Unfortunately, drugs are a huge money maker and the people collecting it do not want the cash flow to stop.

The film's run time is a bit long and a little less of Santana and a smidgen more of J.D. could have helped explain some things. J.D. is shown in the movie as a blond Chicano. He speaks Spanish and uses the same slang as everyone else. In real life he was a Croatian who happened to live near Santana and became his best friend. Spoiler alert: The movie shows that Santana was killed by his old gang with J.D. possibly being in the know. In real life it was a rival gang that shanked Cadena, something that also upset his followers.