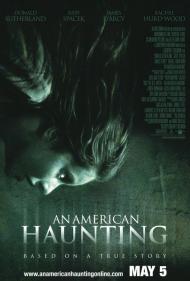 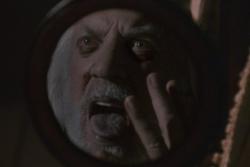 Donald Sutherland in An American Haunting.

An American Haunting purports to be based on the most documented case of haunting in American History. A note at the end of the film claims that there has been over twenty books written on the haunting and the version they present is based on one of the theories. Apparently this is the big draw to the film but if the filmmakers had taken more license with the story it could have been a better movie. As it is it is just a watered down version of The Exorcist set in the early 1800s.

The story is bookended by scenes in the present with a mother and daughter living living on the spot where there haunting took place. The mother is reading a letter written by Lucy Bell (Spacek) in which she details the events surrounding the haunting. This leads us into the past where the actual story takes place. It's an unnecessary device that I suppose was added to give today's moviegoers someone to connect to.

The main plot of the film starts in 1818, in Red River Tennessee. Following a land dispute with a local woman whom some suspect to be a witch, the prosperous Bell family begin to be visited by a spirit who wreaks havoc on their home and their teenage daughter Betsy, especially. The spirit first manifests itself by making strange noises and by appearing in the form of a black wolf who prowls their farm, appearing and disappearing at will. It then begins to physically attack Lucy, dragging her from her bed and slapping her around. A young girl also begins to appear although Betsy is the only one who sees her.

Betsy's teacher, who scoffs at the idea of a supernatural explanation, takes over the investigation, but he too becomes a believer after witnessing a bible being snatched from someone's hand and windows breaking all without a visible cause.

Eventually, the head of the household, John Bell (Sutherland) swallows his pride and goes to visit the witch, begging her to remove her curse, only to be told that the curse is not her doing, but his own.

It isn't until one of the Bell family members dies that the spirit finally removes itself. The reasoning for why the spirit leaves is detailed at the end of the movie in what could be described as an M. Night Shimalayn moment. If you believe in this sort of thing it makes since, but if you're like me and don't, then it will be an unsatisfying explanation and will leave you with unanswered questions.

While some of the moments are creepy, the movie doesn't contain any real "jump" moments and it never breaks any new ground. For a horror movie, there is very little horror. The only novelty to it is the time period, which is well done and accurate, apart from the accents with only some of the cast even bothering to try to sound southern.

One thing that bothered me while watching was the number of times the spirit would appear in Betsy's bedroom and start attacking her, followed by the family rushing to her room only to be locked out by the spirit. First off, why was this poor girl forced to keep sleeping in that room alone and secondly, why the hell didn't they take the door out after the first couple of times this happened?

If you're a believer in ghosts and spirits you might enjoy this film. It just made me want to find out what really happened in that house. The final reveal gives you ideas of a rational explanation, but the filmmakers, like the people of that time, are too enraptured of the supernatural side of things to really make an investigation into alternatives. 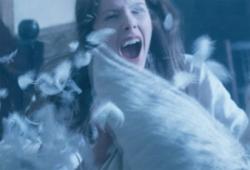 Rachel Hurd-Wood as Betsy Bell, having a ghostly pillow fight in An American Haunting

An American Haunting ends with the words, “This film is based on true events.” Bull shit! There is not a single shred of evidence that suggests any of this even came remotely close to happening. There are no written documents by any of the people who were there that make claim to any ghostly or personal occurrences that are depicted here. It was not until sixty years after these events supposedly took place that someone first wrote about it. By then, none of the people portrayed here were still alive to dispute or corroborate the story. He took it from rumors and gossips others had repeated over the years. The tale of the Bell ghost was a sensation and even reportedly greatly fascinated President Andrew Jackson.

With that said there is very little new here to even talk about. Strange noises and creepy shadows have long lost their movie scare factor. As Scott wrote, we have seen the possessed child angle before in many films, most notably The Exorcist (1973). The single best scene is when the evil spirit desperately searches through the house before flying outdoors and over the countryside to find Betsy being spirited away in a carriage.

Like Scott, I also found the time period to be the most unique aspect of this film. The words, “Little Haunted House on the Prairie” kept coming to mind. Although it takes place in Tennessee, it was filmed in Romania and Canada. I also question why this girl was so often left alone even after everyone in the family has witnessed her being physically assaulted by an unseen spirit, over and over again.

The film gives us a few hints as to something that is going on. One of the biggest is when John says to his daughter Betsy, “You were always a sound sleeper.” Of course, most of what occurs is never explained, even if it could be.

An American Haunting serves only to increase tourism in Red River, Tennessee, where the Bell family tombstones can be visited by those so fascinated by such ghost stories.