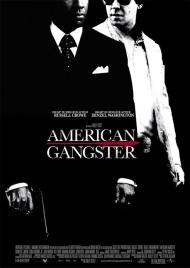 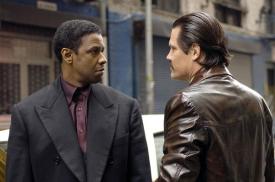 If you go into American Gangster expecting to see Denzel Washington and Russell Crowe going mano-a-mano against each other in a rematch of their earlier film Virtuosity, you'll be disappointed. They don't appear in a scene together until the very end of the movie and Denzel's character, Mob Boss Frank Lucas, is completely unaware of Crowe's Detective' Richie Roberts' existence. It's still a good movie, but with two such heavyweight actors together in the same movie, you can't help but want to see more of them together.

Based on a true story, American Gangster tells the tale of Frank Lucas, a notorious crime boss of the 1970's. Using connections in Vietnam, Lucas rose to power by importing heroin from the far east, smuggling it into the country by hiding it in the coffins of dead American soldiers. Purer and cheaper then what was currently available on the streets, Lucas amassed a fortune that soon found him to be the most powerful Gang Boss in New York City. Even the mafia came subserviently to him for a piece of the action. He was the most powerful Black gangster to have ever lived.

Against him is detective Richie Roberts. During a period when the police were notoriously corrupt, Roberts stood out as the "one good cop in a bad town". He became famous amongst his fellow officers when he discovered nearly a million dollars in the trunk of a car and then turned it in rather than keeping it for himself. This makes him a pariah on the force, since his fellow officers would rather he kept it quiet and distributed it among them. His honesty pays off in a way when he's recruited by the newly formed DEA. His first assignment is to go after the suppliers of the new super heroin "Blue Magic", which he learns after much hard work is Frank Lucas.

Like the Godfather, this movie makes you care about and have a certain begrudging respect for a gangster. Yes, he's a murderer and a drug pusher, with a fierce temper, but he's also a family man who looks out for those who look out for him. While the movie does show scenes of users of his product ruining their lives, you could argue that he's not the one forcing them to use drugs, he's just taking advantage of the fact that there will always be those who do. He's certainly better than the corrupt police who would rather look the other way so as not to kill the cash cow. At least he's not a hypocrite.

The "good guy", Roberts, is no less grey. He's a horrible father, embroiled in a bitter custody case with his ex-wife, more for the purpose of hurting her than for actually gaining custody of his son. He has friends from the old neighborhood who are known mobsters, who he leaves alone so that he can gain the occasional piece of information.

My problem with the greyness of each character is that the movie lacks a certain urgency. If Lucas was a total bastard, you'd be rooting for Roberts to take him down the whole movie and waiting for the final showdown. If Roberts was a total corrupt bastard, you'd be hoping for Lucas to outwit him and somehow come out on top.

The other problem with this movie is that it's just too damn long. I've said it before and I'll say it again. Comedies should be 90 minutes, dramas, 120. When a movie runs 2 hours and 40 minutes, as this one does, you'd better be damn sure that the story couldn't have been told in less, but such is not the case here. Most of the trimming could have been Robert's side. Way too much time is spent on his partner and his ex-wife. His story could have started with his recruitment to the DEA. It's almost as if Crowe demanded equal time with Washington and got it, when for the story, it wasn't needed.

And so what could have been a great movie, is instead only a good one. I'm a fan of well-done gangster movies and this one is well-done, just not well-done enough. 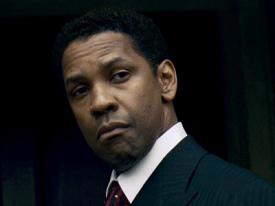 I liked this movie slightly better than Scott. Yes it is a bit long and I agree that both characters are somewhat morally ambiguous, but neither of these facts bothered me in this instance. The acting and story are compelling enough that the run time seems to go by quickly and the realism of the story makes the "grayness" of the characters necessary.

Washington's Frank Lucas is quite similar to Brando's Vito Corleone. They are both ruthless, violent and ambitious men. They also both have kind and generous hearts for their loyal family and friends. It is Crowe's Detective that is the more unsatisfying character and I agree that if anything was trimmed from the movie it should have been his scenes. He appears honest and is clearly driven to put criminals behind bars, yet he is selfish and emotionally fucked-up in his personal life. Like Scott said you don't really root for him, although I did find myself rooting for Lucas, much as I root for the Godfather.

The supporting cast is good with the standout performance going to 83 year old Ruby Dee. I would love to see her win Best Supporting Actress at the Oscars. At the very least she should garner a nomination. She plays Frank's mother and has one of the best scenes in the movie. In a career that dates back to 1939 she has yet to win the highly coveted statuette.

American Gangster is a very good movie that will stand the test of time. 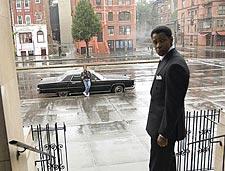 The fact that the two main characters are “grey” was intended. The entire point was to make the audience view neither as perfect or completely bad. Ridley Scott is a liberal. Of course he does not see the world in absolutes. His intention was to make the characters fleshed out, and neither one perfect.

Roberts personal life is a mess, while Lucas’s personal life is the one thing he has going for him. Roberts does not put any effort into his family. When he is shown with his son he barely touches him, let alone acknowledges that he is even there. Lucas buys his mom a mansion, and has his four brothers work for him, as well as numerous cousins.

Professionally, Roberts is the upstanding policeman. He does not take money or bribes. Meanwhile, Lucas is a cruel psycho. He murdered someone in daylight, in front of people. He set a conscious man on fire.

The entire movie is spent comparing the two. Lucas cares desperately what people think of him while Roberts does not give a shit. Lucas wears nice clothes and instructs his brothers to not wear “super fly” clothes, because of how people will perceive him. Roberts hangs out with highschool friends who are now mob connected, knowing this makes him look suspicious, but not caring.

All of that is mildly interesting but I wanted a bigger payoff at the end when the two finally met. The movie notes that Lucas turns evidence to lesson his sentence, and eventually becomes Roberts client after he becomes a defense lawyer. Did they become friends? This movie should have edited the early parts of the movie and shown more of why Roberts would have spent years finding Lucas only to work towards getting him out of prison.

All in all, the movie takes far too long to simply say that the good guy is not completely good, and the bad guy is not without some redeeming values. It is typical liberal thinking to mix up personal feelings with legality. So what if he is a lousy father? I guess his wife was pretty bad at picking a spouse. Lucas broke countless laws, legal and moral. To compare and contrast the two men is mildly interesting, but ultimately futile as one remains on the good side of the law while the other is a bold faced criminal.