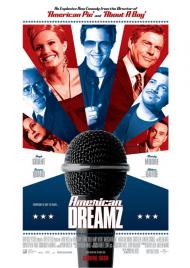 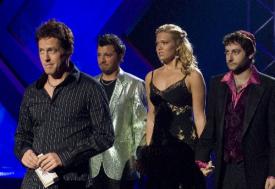 I have to admit that I've never seen an episode of American Idol. However, as you probably already know, millions of people do watch it every week and as even the tagline for this movie points out; more people vote for the contestants on that show than vote in Presidential elections. That being the case, who thought it would be a good idea (and one that people would pay to see) to make a movie that makes fun of, not only the show, but the people who watch it? And not in an inclusive, "Let's laugh at ourselves!" kind of way, but in a mean spirited, "Aren't you a bunch of idiots!" way.

The plot of the movie involves a group of characters all involved with the television show American Dreamz, which is a not very disguised takeoff on American Idol, complete with smarmy and insulting British Host. Instead of Simon Cowell, we have Hugh Grant playing host Martin Tweed. To Grant's credit he plays the vile host very well. And he isn't the only actor turning in a fine performance. Mandy Moore as the "I'll do anything to win, while seeming wholesome and sweet on the outside" contestant on the show also does a terrific job.

For the newest season, Tweed decides to bring in a few ringers to spice up the show. One of them is an Arab (because he wants both an Arab and an Hassidic Jew on the stage together) who also happens to be part of a Terrorist Sleeper Cell. Omer, the Arab Terrorist, was sent to California because he was a horrible terrorist and his group hoped to keep him out of the way. The one thing that made him unique was his love of show tunes.

When, in an attempt to boost his sagging approval ratings, the President of the United States (Quaid) agrees to be a guest Judge on American Dreamz, Omer's Terrorist group decides that this is their chance to assassinate the President by smuggling in explosives for Omer to detonate when he is on stage.

While all of these goings on do illicit some genuine laughs, the movie isn't nearly as funny as it should be and blame clearly lands on writer/director Paul Weitz. Weitz, who did such a good job with In Good Company, and About a Boy, does not know how to make a satire. Particularly bad is the character of President Staton. He is obviously meant to be a caricature of President Bush, but he is too fully fleshed out and made too human to be strictly a satiric look at the President. To feature the character of a stupid President in an all out comedy can be fun and funny. Leslie Nielsen in the recent Scary Movie 4 is funny. Will Ferrell's "impersonation" of George Bush on Saturday Night Live was funny. And that's because they weren't real people, they were exaggerated impersonations. But to make a President this incredibly stupid and have the audience laugh at him only to turn around and try to make him all too human, is not funny, it's actually quite sad.

What is funny is to propose the idea, as this movie does, that the President could find out the truth of what's happening in the world simply by reading the newspaper. The implication is that the President's staff is only feeding him their side of the story. Well, it's a good thing he's got the New York Times to give him a full and unbiased version of the news. They NEVER have a political agenda in that paper.

The movie does achieve some real laughs, but most of them are from the supporting characters. Seth Meyers does a great job as the slimy agent that Sally immediately hires when she finds out that she's going to be on the show. Omer's flamboyantly gay cousin, who helps choreograph Omer's dance numbers, is also worth a few laughs. They, unlike the main characters, are never fleshed out and are instead played completely for laughs, which makes them (guess what!?!) very funny. Not that you can't have funny characters who are fully fleshed out, but it undercuts the comedy here.

American Dreamz is obviously meant to be a satire of the American way of life and this countries seeming obsession with fame and money. That's fine. I enjoy satire and am perfectly able to laugh at myself and this country, but not with this movie. It's too mean spirited and doesn't seem to invite you to laugh with it, but rather seems to be laughing at the very same people it expects to plunk down money to see it. When the most sympathetic character in the movie is a potential suicide bomber, you know something's wrong. 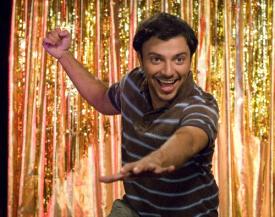 Scott I think you took this movie a bit too seriously. I didn't find it to be mean spirited at all. I LOVE Amercan Idol and watch it faithfully, but I wasn't the least bit insulted by this movie. It is a satire and as such uses exaggeration for laughs. I also found the Dennis Quaid character of the President to be very funny. I don't think they tried too hard to make him a real person, he just isn't portrayed as a bad guy, just a really dumb guy. That doesn't mean he can't have a bit of heart and still be funny. Isn't that the difference between a spoof and a satire? Other than the terrorists, Willem Defoe is the real villain of the movie as a very thinly disguised Dick Cheney. He's the one calling all the shots and keeping the President in the dark.

I agree that Hugh Grant is great as the host/judge of the talent show. He is a clever cross between Ryan Seacrest and Simon Cowell. And Mandy Moore is making a career for herself as the girl-next-door-you-love-to-hate. Chris Klein is also quite good as Mandy's boyfriend. He is a complete idiot but is also one of the few sympathetic characters in the story.

The character of Omer humanizes terrorists by having him become a hero in the end. He was only fighting to avenge the bombing death of his mother anyway, it was never a religious jihad for him. And you have to love any straight character that loves show tunes.

This is not a perfect movie. It will probably seem quite dated in a few years, but it is very funny and worth the price of admission. Like any good satire it spreads the jokes around, every group of people in the movie are poked fun at, from the President to the terrorists and everyone in between. But by doing this it also shows our common humanity. After Omer's final performance (of Sinatra's 'My Way') one of the terrorists in the audience excitedly proclaims, “He nailed it!" In my opinion, so does this movie. 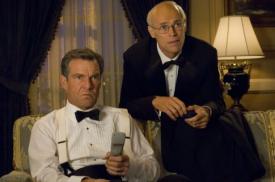 Weitz shows us how the goings on behind a “reality” show are all about ratings and egos. He shows us that the competitors, or at least the really goods ones, are in on the phoniness. The movie should have stayed there. Instead, he also decides to show us behind the curtains of the White House. Here we see a president who is not even sane. This guy can literally not think for himself. I agree with Scott on this one. I never laughed at anything this moron did. Whereas Weitz making fun of a television show is probably something he, as a writer/director, knows something about, but what public office has he held? How many private conversations has he had with the President of The United States or his Secretary of State?

The humor, that Weitz is going for here, is humor that rings of some truth. Tweed/Simon Cowell is a egomaniac. Yep I got that joke. Cowell demonstrates his arrogance on every American Idol show. Contestants on this shows are generally phoney. Yeah, how many sappy stories do we have to hear before they actually sing? All of the jokes about this contest work because we see the truth of it on American Idol every week. Now, the only way anyone could find the jokes about the President funny is if they actually believe that there is some shred of truth to Quaid's portrayal. For his performance to be funny, in this type of movie, you have to except that George Bush is a clueless moron.

Just imagine a movie with a serious portrayal of Clinton that made him look like a pathetic President who only wanted to get laid and nothing more. As directed by someone like Weitz, I would probably laugh my ass off, but Clinton supporters may not see it as containing any truth and thus not find the humor in it.

I have no problem with making fun of a President. As Scott wrote, Scary Movie 4 hilariously poked fun at him. Quaid plays him too straight. It is as if he is in a dramatic movie, written by Michael Moore, while everyone else is in a comedy.