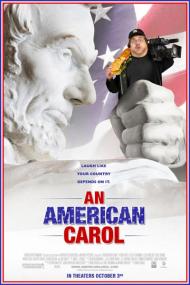 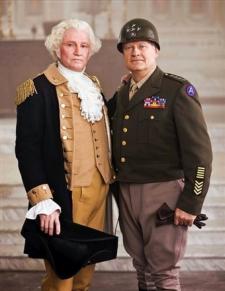 Jon Voight and Kelsey Grammer as Washington and Patton

Matt Damon did his blog about his mistrust of Sarah Palin. Pamela Anderson endorsed Obama on David Letterman. Wanda Sykes did a monologue of jokes bashing Sarah Palin on Jay Leno. Richard Gere ended his interview on Regis and Kelly by saying, “Obama-Obama.” Whoopie Goldberg and Barbara Walters fawned over Michele Obama on The View. Oprah openly endorses Obama. It is painfully obvious that Hollywood, for the most part, is wasting no opportunity to show their liberalism and publicly promote Obama for President.

An American Carol is that rare Hollywood film with a conservative perspective. It does not endorse McCain or poke fun at Obama. In fact, neither candidate are ever mentioned. Still, this film is intended for the Rush Limbaugh, Sean Hannity, Michael Savage crowd. If you have liberal tendencies you may likely not enjoy the jokes or appreciate what it has to say.

The movie opens with a grandfather telling a story to his grandchildren on the 4th of July. It is a take on Charles Dicken’s A Christmas Carol. He tells them about an America bashing documentary film maker, named Michael Malone. He makes films with such titles as Die You American Pig. His latest crusade is to ban The 4Th of July as a holiday and protest the war on terror.

Malone gets visited by four spirits. The first is John F. Kennedy, who reminds him that he advocated war when liberty in the world was threatened. Then he is visited by General Patton who takes time showing him, among other things, just how misinformed so many people are. My favorite joke in the movie is when Patton explains college protestors to Malone. George Washington and Bill O’Reilly stop by to help educate him as well. Trace Adkins shows up as the angel of death.

A side story involves Malone taking some money from some middle easterners to make a movie. He does not realize that they are terrorists. The greatest asset of the film though, is that it uses actual lines from real people to make a point. It quotes one of Kennedy’s inspiring speeches as well as one of Rosie O’Donnel’s crazy rants.

Some of my favorite moments are the ones that point out Hollywood’s comfort to the enemy. At one point Malone asks his nephew Josh, if he wants him to send him DVDs of his movie’s while he is serving over seas in the Navy. Josh replies that he already has plenty, as they found copies of them when they captured Saddam’s palace. Another scene has a movie star giving an acceptance speech, in which he admits that he will make films that show the evil of slavery and Nazis but not Islamic terrorists, as he is too scared to.

Like all of the liberal, anti-Bush and anti-war movies of the past couple of years, this movie is merely preaching to it’s choir. Conservative movie goers, who are sick to their stomachs of elite Hollywood actors slamming this country, will relish this comedy and laugh through most of it. The liberals will either bash it or ignore it. I for one, loved it. Early in the movie they make a comparison between Malone (Michael Moore) and Leni Riefenstahl. Who would have ever thought of doing that? Oh yeah, me back in 2003. 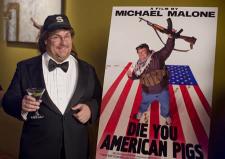 Contains a few chuckles, but not enough laughs.

In terms of political tendencies, I've always fallen somewhere in between Eric and Patrick. Not as conservative as Eric and not as liberal as Patrick. So while I didn't completely agree with everything this movie was saying, I did find quite a bit to at least chuckle at and a few things that made me laugh out loud. It helped my enjoyment that I really dislike Michael Moore and his documentaries.

My favorite joke in the movie was the running joke about Malone being just a Documentary director instead of a feature director. His award is smaller than the feature director's award and has a keychain attached to it. When he tells his agent that he's won awards, his agent responds, "Yeah, for DOCUMENTARIES" while making a jerking-off motion with his hand.

What I really liked about the movie though is that it isn't afraid of being politically incorrect. It makes fun of nationalities, handicaps and sexual orientation without worrying about whether it will offend anyone. I am so sick and tired of hearing people whine and complain that they were offended by some movie, stand-up comic, shock-jock or television show. I mean when did we all turn into glass and could so easily be broken? I don't remember being guaranteed at birth that I would never be offended during my life. So I salute this movie for that.

The only point in the movie that I really disliked is at the end at the country and western concert, the singer says, "Welcome to the real America" and Malone makes a comment about country music and NASCAR. To me that sounds very exclusionary. As if you either like country music and NASCAR or you're not part of the real America. I'm not a big country fan and watching a car go around in a circle sounds pretty boring to me, but I'm no less proud to be American.

It certainly made for a change to see a movie from this perspective. It was refreshing if nothing else. It's too bad that not all of the jokes work and too many of them devolve into slapstick, particularly the terrorists. It is funny and some of the points it makes are very true. Director David Zucker, who has made a career out of zany comedies, knows how to throw a lot of jokes at you, but as his career as gone on, his joke to flop ratio has gotten worse. 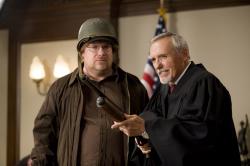 Kevin P. Farley and Dennis Hopper in An American Carol.

An American Carol could have been a great political satire but instead it goes for lowbrow humor of the flatulence and young-kids-swearing-at-their-elders variety. Even the choice of Michael Moore as the target of derision was such an obvious and easy one and yet the jokes they come up with aren't clever or funny. Moore is the liberal equivalent to Rush Limbaugh and they both make such big, easy to hit targets that I'm surprised the best they could come up with were lame jokes about his disgusting eating habits and exaggerated comparisons to Hitler.

Many of the jokes could work both ways, depending on your political slant. In one scene liberal professors mention that if you are “gay, poor or black” you get automatic extra credit. It's a mildly amusing line. But a liberal movie could use a variation of that same line in reverse to poke fun at conservatives.

What this movie really demonstrates though is just how far apart the two political parties have become. Both sides demonize the other to the point where their interactions resemble a schoolyard fight instead of intelligent discourse. The fact is that whether you agree with Michael Moore or not he still loves this country as much as anyone else. It's ridiculous to assume that just because someone complains about things they don't like that it means they are somehow anti-America.

I do give this movie credit for having the balls to include jokes about Islamic terrorists. The scene where everyone is named Mohammed was funny and one of the movie's best lines is said by one of them. “It is getting harder and harder to find suicide bombers. All the really good ones are gone.”

Another scene that was cleverly written was where the terrorists are discussing Michael Malone and one of them asks why the United States government allows his behavior and then two of the terrorists look at each other and with a knowing laugh say in unison, “America.” They are making fun of what they see as our weakness when in fact they are pointing out our greatest strength: freedom.

Of all the impressions of the famous dead Americans only Jon Voight is believable as George Washington. He really looks the part but of course no one knows what the real Washington's speaking voice sounded like. Kelsey Grammer, on the other hand, makes a horrible George S. Patton. The cast is quite unique. I can think of no other movie that includes both Dennis Hopper and Gary Coleman.