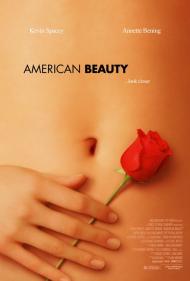 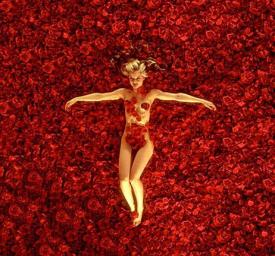 Mena Suvari on a bed of roses in American Beauty.

One of the many things that make American Beauty a great movie is the character Lester Burnham, incredibly portrayed by Kevin Spacey; his numbness, his frustration at an existence which has become completely inane. He is really playing every aging suburban baby-boomer that has reached a point in life where nothing has turned out as expected. His wife has turned coldly ambitious, his job is suddenly in peril unless he kisses enough asses, and his daughter thinks he is completely pathetic. When the high point of your day is a morning whack-off session in the shower you can be sure you have just butted your head against the wall of a mid-life crisis. Lester Burnham reacts by quitting his job, smoking marijuana and sexually fantasizing about his daughter's best friend. Spacey makes Lester seem so real and natural that it is easy to overlook just how great this performance is, but if you look closely you will see a brilliant artist at work. Whether being sarcastic, smiling gently or exploding with anger, Lester is the focal point around which this story revolves.

Annette Benning plays his wife Caroline, an uptight real estate agent obsessed with success. She is domineering and selfish, yet thanks to the talented actress playing her we can see the woman she once was lurking just beneath her brittle shell. Caroline, it turns out, is a passionate woman with a great sense of humor. Only it takes an affair with The King of Real Estate (Peter Gallagher) to bring this to the surface. So we have these two well rounded, totally believable characters that were once in love with each other and who have become completely alienated and caught-up in their own search for fulfillment.

Their unhappy daughter Jane rounds out this dysfunctional family. Her discovery of love with the new boy next door is both poignant and very real. It is through his eyes that the movie's theme is seen. That no matter what tragic or hideous things may occur in this world they cannot stamp out the beauty. And, in fact, by seeing death as the ultimate beautiful thing we take away it's ability to frighten. The symbolic shot of the plastic bag dancing on the wind is slightly hokey, but still is rather effective.

The Oscar winning script is a brutal satire of modern suburbia. The gay neighbors, Jim and Jim, are funny but not fleshed out as completely as the other characters. And though Sam Mendes does a first-rate job of directing, there are a few minor flaws in the film's pacing. These occur in the slow-mo sexual fantasy scenes, which take a bit too long to unfold. And we really only needed one of them to understand Lester's attraction to the enticing young girl. The use of the voice-over from beyond the grave is fairly successful and the final montage of Lester's memories as he is dying should hit home for anyone of the boomer generation. Still, it is the corniest thing in this otherwise unsentimental film.

One would have to search long and hard to find a recent movie that is as powerful and as funny as American Beauty. 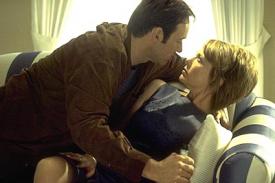 Kevin Spacey is the greatest actor of his generation, hands down, no contest. In fact, the first time I saw American Beauty I was so blown away by his portrayal of Lester that I never even noticed the great performances being given by the other actors in this film. And they are brilliant, especially Annette Benning. That the acting in this movie is only a part of a terrific whole, makes this movie a classic.

Patrick did a terrific job of summing up the themes of this movie. He actually gave me a slightly clearer view of some them. I agree with his entire review, except for the part where he says the sexual fantasy scenes are played too long and too frequently. Not only did I enjoy them for the obvious reasons, but do feel they are justified, since at the beginning of the film, a fantasy life is all Lester has to enjoy.

Sam Mendes, as the director, really pulled this movie together in a tremendous and subtle way. His use of lighting is beautiful. Note the scene in the beginning at the Burnham dinner table. By positioning lights on the table, hidden behind the dishes, each of the family members is lit in a completely different way. There are subtle touches like these, which are only noticeable on repeat viewings, scattered throughout the film.

One of the other things about this movie that I truly enjoyed, is that despite it's being a drama, filled with tense and tragic moments, it also contains some laugh out loud, incredibly funny moments. The scene in the drive-through, or the moment where Lester shows his boss his job description, both leap to mind.

The only sour moment in this otherwise perfect film, is that damn plastic bag. I get what they are trying to say, that beauty can be found in the smallest things and is all around us if only we would be open to it, but it just comes across as pretentious and annoying to me. But just ignore this scene, it's short and doesn't detract from the overall movie.

After all, the real joy of this movie, is Kevin Spacey. His performance could cover a dozen flaws and makes the price of a movie ticket or video rental more than worth it. 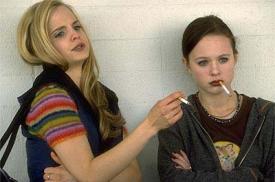 American Beauty is a homage to the wonderful utopia that feminism has forced on to the country. Lester is the perfect feminist husband; complacent, undemanding and pretty much just plain pussy whipped. His wife is the true feminist in action. She has a husband, daughter and most importantly a career that gets far more of her time, passion and understanding than her family does. She drives the car. She decides the schedule and tells Lester how to act in public.

All of this pathetic living begins to crumble when Lester first sees a friend of his daughter and develops a lusty crush on her. This is his key to escaping his prison like life. He begins working out to impress her. He quits his advertising job and gets a job flipping burgers. He takes his severance pay and buys an old sports car he wanted when he was 17. Lester is having a mid-life crisis.

Lester's wife is not interested in having sex or intimacy with him anymore. She finds that in the arms of another man. Lester no longer connects to his daughter. She is infatuated with the ever peeping neighbor boy. In one scene there almost seems to be some hope for this family. Lester nearly seduces his wife by reminding her of a romantic moment they once shared, but his wife is so uptight that it doesn't get that far.

Wonderful, selfish characters that each are flawed to the point of being absurdly real. Lester, with whom, I felt the most sympathy for is a pot smoking, wannabe statutory rapist.

He is a prisoner in a cell of his own creation, and is trying to escape by gnawing on the bars instead of just opening the gate. Why he doesn't divorce his cold wife is never addressed.

There is great use of colors and symbolism here. The red on the front door and on the ever present roses. The cold blue office of Lester's supervisor. The neighbor boys all white, bland bedroom. The carefree bag blowing which ever way the wind takes it. The characters constantly looking through windows. The irony of the daughter's friend awakening Lester's passion and sending him on an emotional quest for happiness and then near the end enlightening him about what he really is.

Not only is the direction great, but the acting is as well. Kevin Spacey is perfect as the age reversal Lester. By the end of the film he is pretty much a teenager. Watching TV, playing with a remote control car, smoking pot and chasing a cheerleader. Annette Bening plays Lester's wife on several levels. On the surface she is Donna Reed. Very proper and always well dressed, even when doing yard work. Underneath she is very frustrated with her career and family. She is having a hard time selling a house and Lester does not play the type of proper husband at social events she would like. She, like Lester, chooses to not take the easy way out, which would be to put more energy into saving her family. Instead she chooses to have an affair.

This film is a wonderful study of the American dysfunctional family. People interacting, but never really communicating. The family sits around the dinner table dining on their self pity.