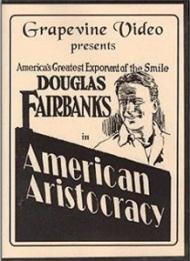 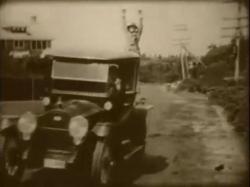 Douglas Fairbanks is just hanging around in American Aristocracy

American Aristocracy starts with the quote, “Has America an aristocracy?” The film features a gathering of the country’s wealthiest business owners. Each made their fortune by dominating a particular industry or product. The one business it does not mention is the movie industry. This film was willing to call out the ultra-rich and depict many of them as snobs, but it did not include itself. Perhaps in 1916 movie makers had yet to become wealthy members of such elite clubs.

A pre-mustached Douglas Fairbanks stars as an entomologist who is far more interested in bugs than social acceptance. While searching for a rare specimen in the woods near the collection of millionaires, Fairbanks meets an attractive girl who kisses him spontaneously on the street. That night the hotel is having a party that Fairbanks decides to attend so as to spend some time with her. It is by invitation only, so he has to sneak in. “This hotel is for aristocrats.” He is sternly told.

A social statement, what there may be of one, a plot involving smuggling, and mistaken identity and for that matter everything else in this film, takes a back seat to Fairbanks’s stunts and athletic actions. He climbs and jumps around like a monkey at play. Look at when he stands atop of a moving car and grabs a wire above, hanging there as the car moves on. The elevator climbing scene is one of my favorites.

A year into his movie career, Fairbanks was more of a gymnast than an actor. The film makers knew how to exploit his athletic abilities. Note the scene where he easily propels himself over a fence and then a moment later another man climbs over it much as most men would. He looks clumsy compared to how gracefully Fairbanks managed it.

American Aristocracy has some stellar credentials. The story was written by one of the best of the early screen writers, Anita Loos. The cinematographer was Victor Fleming, some 23 years prior to directing both The Wizard of Oz and Gone with the Wind. The film’s supervisor was none other than D.W. Griffith.

At just under an hour, this film flies by, climaxing at sea as Fairbanks rescues his lady love and her father. The very last scene is humorous as Fairbanks both mocks wearing a mustache and instantly comes up with a fortune making idea. He joins the aristocracy just as he soon would in real life. In 1920 he married Mary Pickford and they would become the unofficial King and Queen of Hollywood, ruling from their Beverly Hills castle known as Pickfair. 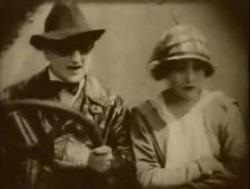 There may have been people making lots of money off of the movies in 1916, but they weren't the sort of people to spend their summers in Newport, Rhode Island as Narraport in this film is clearly modeled on. The snobbery on display is worth a few laughs, particularly when the wives of the distillers look down on the wife of a mere brewer. There's an added irony when Fairbanks' Cassius Lee is dismissed as an upstart by the hatpin maker when in reality he's one of the First Families of Virginia, as revealed by one of the title cards, making him more aristocratic than any of the businessmen trying to pass themselves off as such.

Fairbanks was famously athletic and he gets a chance to show it off here in several scenes. I agree with Eric that the elevator climbing scene  is one of the best moments. Likewise, I agree that he has a way of climbing a fence that makes it look smooth and easy. Some of his antics though are over the top. Even in the non-action scenes he is unable to stand still. Watching him prance, leap and jump around his camp makes him seem just plain silly. However, his best acrobatic scenes are the film's best scenes.

The plot, though silly, is fairly sophisticated for 1916. It's not strictly a comedy, but there are some amusing moments and the tone is very light. The running time is under an hour, but even at that length it feels a little stretched. For a silent film, the acting is subdued although I have to agree with Eric again that Fairbanks wasn't much of an actor. Still, he had a certain charisma that worked in his favor as well as an infectious smile.

Not really a classic, but if you're a fan of silent films you'll find some things to enjoy here. 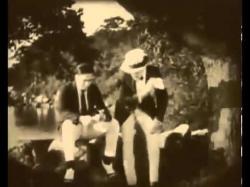 As Scott mentioned the main social commentary the film is poking fun at is the nouveau riche. The people vacationing at Narraport all come from new money. For all their snobbery they aren't cultured or sophisticated at all. They don't even use proper grammar. Fairbanks's Cassius Lee is the only one that is truly of the American Aristocracy. The giveaway is that the truly rich and cultured never speak about money.

Douglas Fairbanks put the move in movies. He was the perfect leading man for the early silent era. His limber athleticism and constant movement are what motion pictures were all about. I too loved the elevator climb. It's truly impressive, as is the moment where he is driving a car and he jumps out to retrieve his hat that has blown off his head. He races to catch back up to the car, climbs in, and casually resumes driving.

There is plenty of sly humor to be found. Notice the scene where Fairbanks is contemplating how to climb up to a second story window, only to realize that a basement window is unlocked. I chuckled at the end when the girl tells him, in reply to his marriage proposal, “I'm afraid father won't consent. You've never had a full page ad in a magazine.”

American Aristocracy is a well-made movie for 1916. It features plenty of action and comedy and showcased a bright new star then on the ascent. Many early silent movies are only memorable for their historic importance. This one has retained much of its original entertainment value as well.