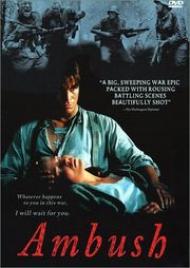 Peter Franzén and Irina Björklund are to Finland what Brad Pitt and Angelina Jolie are to America. The married couple have acted together in several films. Both have won the Jussi award, which is Finland's equalivant to The Academy Award. Both were nominated for one for their work in Rukajärven tie in 2000. The movie was released in Finland in 1999.

In Rukajärven tie, or Ambush in The United Sates, Peter plays a Finnish soldier in World War II. His fiancé, played by Irina, is in the women's Auxillary. Both are off doing their part for the war. They accidentaly run into each other in a Russian village. They make love and part ways. Peter heads deeper into Russia with his bycycle riding squad while Irina heads back to Finland. Peter soon gets word that the group Irina was with was attacked and no one survived. Peter spends the rest of the movie moping about as his squadron heads deeper into enemy territory.

Perhaps something was lost in the translation, but the characterization is minimal. Other than the two leads love for each other, there is really nothing to latch onto. All of the supporting parts are soldiers who have little personality. There is one who is considered a coward and there is a father and son serving together. You just know one of them is going to die. For a war movie, the action scenes take a little while to show up. Perhaps I should have been more patient but the DVD cover treats this as an action film. Once they do show up they are as tense and interesting as anything seen in Saving Private Ryan.

A couple in real life does not gaurantee on screen chemistry. Peter and Irina apparently have it both ways. I wonder if it is more awkward for actors and actresses to do a love scene with a stranger or a spouse? The other person is intimately familiar, but you are acting out your marriage's most personal moments for the entire world to see. Then again, stage and screen acting is the very epitome of exhibitionism?