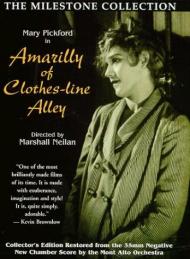 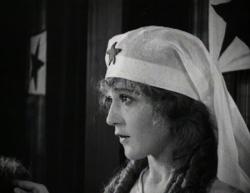 Mary Pickford was the first internationally famous movie star; she was a household name before Charlie Chaplin. She was also a brilliant businesswoman, co-founding United Artists with Chaplin, D. W. Griffith and Douglas Fairbanks in 1919. The famous line “The inmates have taken over the asylum" was said in reference to this.

Amarilly of Clothes-line Alley, released in 1918, is one of her finest pictures. It tells the story of a young Irish-American girl, living in poverty and squalor in a slum near San Francisco's Chinatown. Her Ma is a washwoman. She has a whole brood of siblings and a local boyfriend who bartends in a neighborhood dive. As the movie opens young Amarilly seems blissfully content with her lot in life.

When she is fired from her job as scrubwoman at the Majestic 'Theayter', her boyfriend lands her a job as a cigarette girl at the bar where he works. One night a fight breaks out between some local boys and a couple of slumming swells. Amarilly winds up taking one of the injured swells home and soon she is rubbing elbows with a snobby group of highbrows. Will she fall for the rich swell or stay with the faithful boyfriend?

The brilliance of this picture is in the editing and dialogue; both of which are way ahead of their time. The story is told in many short, interspersed scenes, cutting between Amarilly, her Mother, the Swell and his Aunt. The dialogue is colorful and humorous. When Amarilly shows off her new muff in front of a group of neighborhood girls, one of them asks, "Where did she cop that muff?" Another girl replies, "We lost our cat last week."

It is easy to see why Mary Pickford had such an instant and long lasting appeal. She goes from exuberant to sorrowful, feisty to tender, joyous to rebellious. She is truly a force of nature. 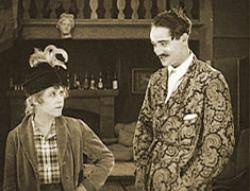 Amarilly and her gay dude.

I am not a huge Mary Pickford fan.  Although she pulled it off, her grown up child persona was ridiculous.  Other than Gloria Swanson, she was the only true actress of silent films.  She did great drama, such as in Sparrows, and good comedy such as Amarilly of Clothes-line Alley.

Here she plays a young Irish woman, Amarilly, with all the stereotypes given to Irish characters.  She stands up to flirting men and loves watching a good fight.  Amarilly is highly virtuous.  She is engaged to a man,Terry, that she has been dating for three years, yet they have never even kissed.

The scene where Terry drops her off at her apartment is laughable.  The railing in the stair well wobbles whenever someone touches it.  I thought Pickford was going to fall down the stairs at one point when she leans over it.  I have no idea if it was an intended joke or sloppy set building, but either way that railing was not up to code.

Patrick is right about the dialogue. It is some hilarious jargon.  When Amarilly starts working for the wealthy man, gossips spreads over clothes-line alley.  "Amarilly's getting gay with a dude."  One old bat yells to another.  When Terry calls off the engagement, Amarilly says, "You ain't tying the can to me, are you Terry?"  When her mother puts on her best clothes to meet Terry's mom, Amarilly says to her, "You're all dressed up like a broken arm."

Awhile back I discovered Gloria Swanson's best comedy, Manhandled.  This is, so far, my favorite Mary Pickford comedy.  Both did dramatic roles, but comedy transcends time. 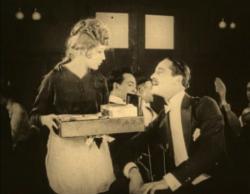 Mary Pickford and Norman Kerry in Amarilly of Clothes-line Alley.

Patrick, you compliment the editing and the way it cuts between scenes may be nice, but when it cuts between wide shot and close-up it seems very rough. The close-ups often seem out of place, go on for too long and feature some hammy acting. The thing about a lot of silent movies, especially pre-1920, is that their quality varies. Directors and editors were still learning and clearly here they hadn't yet learned the art of the close-up.

I agree with both of you that the dialogue on the title cards is a comic highlight. I enjoyed the way the dialogue is written with the Irish accent for the characters in Clothes-Line Alley. It actually took me a second to realize that at one point the mother means "boy" when the card says, "bye".

Eric, there are two of your pet peeves in this movie and I can't believe you didn't mention either of them. First, Amarilly comes from a single parent home, which everyone who reads your reviews knows is your number one complaint about movies. And second, the rich are shown to be corrupt and dissolute creatures here who mock the honest and noble poorer characters, which is probably your second least favorite cliches.

Actually though, if those two cliches show anything, it's that no matter how much technology and living conditions have changed in the almost 100 years since this movie was released, people are still pretty much the same. The girls who cattily comment about Amarilly and her boyfriend, for instance, still exist today. Although going three years without a kiss wouldn't happen today, you could remake this movie with only a slight updating of the plot.

I'm definitely not a big fan of silent movies. Watching this one I realized that after about 20 minutes my attention began to wander through almost no fault of the movie. That's about how long I can take watching a movie without spoken dialogue. When I look back at my favorite movies it is generally the dialogue that I remember most. Sure, for some movies I remember the visuals, but time and time again, it's a movie quote that lives on longest in my mind. Without spoken lines, I just get bored eventually, such as I did here.

Parts of this movie does transcend time and I can see Pickford's appeal as she has a lot of charisma packed into such a tiny frame, but I'll never be the fan of silent films that you two are.