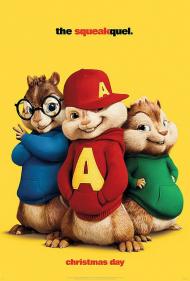 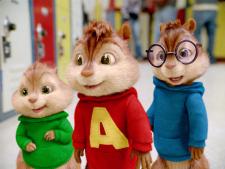 Are they mutants? If they bite me will I become a singing chipmunk too?

The first clue to the quality of what you're in for is in the title. They called it a squeakquel and frankly that's just trying too hard for too small a laugh, which coincidentally sums the whole movie up perfectly.

What's the deal with these chipmunks anyway? They can sing, dance, speak English and they even wear clothes. This time around they're even joined by another group of intelligent chipmunks, only this time female. So can all animals talk in this world? Just chimpunks? Were these chipmunks exposed to radiation? Are they mutant chipmunks? If they bite people will those people turn into chipmunks also? I wish that were true. It certainly would have been more entertaining. And it would make some sort of sense. I know it's just a children's movie, but shouldn't we at least try to have movies with some kind of internal logic, no matter how silly they are?

Jason Lee plays Dave, the chipmunks' guardian. I'm guessing he wanted to disassociate himself from the franchise since he only appears at the beginning and end of the film and a few times on the phone. The excuse they give is that he was injured by Alvin during one of the chipmunks concerts and so has to stay in the hospital. I figure Lee was just embarrassed being in this series and this was his way of opting out while still fulfilling his contractual obligation.

Seemingly unafraid of embarrassment is comedian David Cross who it appears will do pretty much anything for money these days including making an unfunny ass of himself in crappy kids' movies like this one. He plays a former music agent and is the chipmunk's nemesis. He plans to get his revenge when fortune brings into his hands another singing chipmunk group; only this time an all female one.

For some strange reason they hired famous actors to do the voices for most of the chipmunks. Justin Long does Alvin and the new female chipmunks are played by Amy Poehler, Anna Faris and Christina Applegate. Why did they waste their money? It's impossible to tell who is playing who and it's not as if the parts required any acting talent. The producers could have been better served by paying the writers more money instead of wasting their cash on unnecessary stars. The only time a star name becomes relevant is when Alvin is playing dodgeball and a reference is made to Dodgeball the movie in which Justin Long starred. All that really did though is make me wish I'd been watching that movie instead.

Okay, okay, maybe I'm a little harsh on a movie that is aiming at very young children. Well, very young children or the mentally impaired. That has to be the two demographics the filmmakers were shooting for because I can't imagine who else would find it funny.