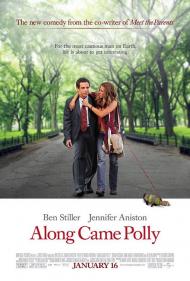 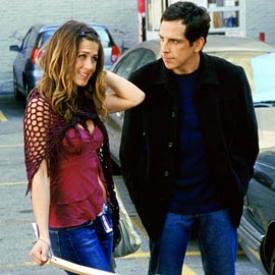 Jennifer Aniston and Ben Stiller in Along Came Polly.

Following the success of There's Something About Mary, Ben Stiller must have been besieged by offers to do romantic comedies which featured gross out humor and a bit with an animal. With the release of Along Came Polly, it seems he finally accepted one of them. The result is an uneven comedy that relies far too heavily on bathroom humor (and I mean bathroom literally) and slapstick. There are some laughs and the cast is likable and talented, but the material isn't strong enough for it to be anything other than mildly entertaining.

Ben plays Reuben Feffer, a risk analyst for an insurance company. Tracking the risks that people take every day has made him overly cautious in his day-to-day life. When his new bride (Debra Messing) cheats on him with a scuba instructor (Hank Azaria) on the first day of their honeymoon, he returns to New York depressed and despondent. Almost immediately he runs into Polly (Aniston), a girl that he knew in Junior High.

Polly is the exact opposite of Reuben. A free spirit, she's drifted through life from job to job and from town to town. In short, having a relationship with her would be a risky venture, but before you can say "Romantic Comedy Cliché," they're involved.

What humor there is in the movie generally involves bodily functions of some kind. Reuben's best friend, a has been actor played by Philip Seymour Hoffman, gives a good example of the types of jokes you can expect when he says, "We have to leave. I just sharted." Sharted, for those who don't know, is when you try to fart, but shit instead. A charming concept, I know. And of course there's the joke, which has been played in nearly all of the previews for the film, where Reuben has an upset stomach and ends up flooding Polly's bathroom.

Lest Stiller should be the only member of the cast reprising a style of humor from an earlier work, the writers of the movie kindly inserted a scene lifted directly from a Friends episode, so Aniston wouldn't feel left out. At one point during the movie Reuben needs to decide whether or not he will stay with Polly or try to reunite with his wife. In order to make up his mind, he makes a list on his computer analyzing their strengths and weaknesses. Of course, Polly comes across the list and is offended. Anyone familiar with Friends will recognize this as the plot from the second season episode, "The One with the List", where Ross makes up a similar list that Rachel finds.

In addition to Stiller and Aniston, the movie also boasts a strong supporting cast. Alec Baldwin plays Reuben's obnoxious boss, Missi Pyle plays a friend of Polly's, and as I mentioned, Hank Azaria plays the scuba instructor who sleeps with Reuben's wife, played by Debra Messing. Of all the supporting cast though, Hoffman gets the funniest moments, so long as you can forgive him for the "Sharted" line. His scenes with the community theater group, where he's trying to play both Jesus and Judas in a production of Jesus Christ Superstar, are worth a laugh or two.

Despite the derivative nature of the comedy, I shouldn't be too hard on this movie. I was never bored with it and some of the jokes work. You just need a strong stomach and the ability to laugh at a blind ferret running into a wall. 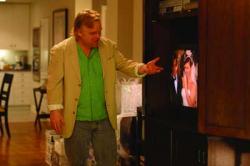 Along Came Polly has lots of bathroom humor but as a sign of how things have progressed (or is that digressed?) in the 8 years since this movie came out, it now seems fairly mild in comparison to movies made today. The word “shart”, for example, has now become a well-known term. The scene where Stiller plugs up the toilet with a hand towel doesn’t even feature any visible feces, even though he had just been taking a dump. Today, I’m sure the director would have treated us to a close-up of the contents of the toilet bowl.

I have to agree with my brother that this movie never rises above mildly amusing. Stiller and Aniston are playing their stock characters. He’s the bumbling, uptight neurotic and she’s the slightly ditzy free spirit. While both of them are fine in these roles, neither of them stretches at all.

Here’s a typical line of dialogue spoken by Reuben to Polly, “Since we have been together I have felt more uncomfortable, out of place, embarrassed, and just physically sick then I have in my entire life. But I could not have gone through that, I could not have thrown up 19 times in 48 days if I was not in love with you.” It’s not horrible but it ain’t exactly inspired writing either.

Hoffman’s former child star is worth a few chuckles. He is remembered for starring in a movie called Crocodile Tears that is meant to spoof The Breakfast Club. The poster for the movie copies that brat pack classic and they even play the theme song (Simple Minds’ “Don’t You, Forget About Me”) just to make sure everyone gets the reference.

The rest of the cast isn’t given much to do. Messing, Baldwin, Pyle and Kevin Hart all have thankless parts that generate few laughs. Azaria (looking more buffed than I’ve ever seen him) brings out his usual shtick utilizing a thick phony accent. There are several fairly familiar faces floating in the background in several scenes. Look closely and you can spot Kym Whitley, Masi Oka, Cheryl Hines and Jeffrey Ross.

Along Came Polly is 90 minutes of mild distraction in the form of a romantic comedy made in the early days of gross-out humor.

The best jokes in Along Came Polly are the visual ones. When Rueben catches Lisa and Claude having sex on the boat, they are both still wearing their flippers. Alec Baldwin is good for a couple of decent ones. When he makes a toast at Rueben and Lisa’s wedding, he makes a sexual gesture with one of his fingers going in and out of his fist as he says to Lisa for all to hear, “Don’t tire this guy too bad on the honeymoon.” There is also the scene where he uses the urinal next to Rueben and then touches Rueben’s face without washing his hands first. Scott was not exaggerating when he wrote of this film’s bathroom humor.

One of my favorite moments is when Hoffman plays basketball like he is some champ but never, ever comes close to getting the ball in the basket. The funniest basketball moment comes when Rueben’s face gets washed by the sweaty, hairy guy’s chest. Shown in slow motion, the joke sells itself.

Patrick wrote that this film is already dated because we never see the contents of the clogged toilet. Another sign of how dated this movie is comes at the beginning and end of the movie when a male character is completely nude for yet another visual joke. As this film was made before Judd Apatow started showing off the male member in movies, we are never shown either persons junk.

There is some humor as well as romance to found here in this romantic comedy. My favorite romantic moment is when Rueben explains to Polly all about the germs in the bowl of nuts on the bar and then later guides Polly around a street grate for her own safety. She recognizes his efforts as a sign that he cares as she then takes hold of his hand.

Although hardly a great film, Along Came Polly is worth a few laughs and occasionally demonstrates that actions can speak louder than words.