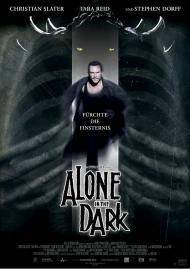 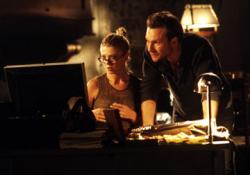 Tara Reid and Christian Slater in Alone in the Dark.

I can think of no other reason for the incredible mess that this movie is, other than that the makers of it were actually trying to make the worst movie of all time. Surely, no one could have produced a movie this ridiculous, this boring, this convoluted, this tensionless, with such cardboard characters, clichéd plot devices, and confusing camera angles without actively trying to. And even if a movie this bad was somehow produced accidentally, no way could a movie studio watch a screening of it and not want to bury the master print in a ditch somewhere unless they truly wanted to release a horrible movie.

I'd really like to explain the plot to you, but even though I just saw the movie, I don't think I'll be able to. I can tell you what happened in it, but as to why it happened, I'm still not clear. Oh, I'm sure there are many people who could analyze it and explain it to me, but they're probably the people who played the video game upon which this movie is based. Personally, I've never played the game, but since it was a best seller, I can only assume it was better than this.

I can tell you what the movie wanted to be. It wanted to be a combination of the X-Files and Aliens. If you took that TV series and those movies, sucked out everything that's good in both of them, swallowed the remains and then vomited it back up, you'd probably end up with something similar to Alone in the Dark.

It's a sign of my age that I can actually remember when Christian Slater had a promising career. While this movie couldn't push his career down any further, it's certainly not going to resuscitate it in the slightest, not unless he's hoping that some director will see it and take pity on him for having appeared in it.

To be fair to Slater though, his only mistake was deciding to be in this movie. The faults with it lie entirely with the director and the writers. The writers came up with the complicated storyline involving an ancient Indian race and a key to the doorway to an alternate dimension where monsters live. The director paced the movie slowly, made the action scenes ridiculous and the characters cardboard. All Slater had to do was appear in it looking slightly embarrassed and collect a paycheck.