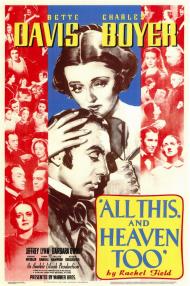 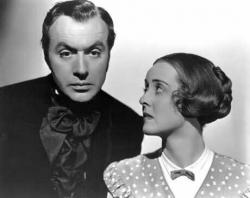 Charles Boyer and Bette Davis in their only movie together.

Bette Davis began the decade of the 1940’s as the biggest female star in Hollywood. She and Mickey Rooney had only recently been voted the King and Queen of Tinsel Town. All This, and Heaven Too was Warner Bros. epic, big-budget, costume drama answer to Gone With the Wind, which had taken the movie-going world by storm in December of 1939. Warner’s publicity department even bragged that this movie had more sets than GWTW. I think it’s fair to say that this was a bit of an exaggeration but nonetheless All This, and Heaven Too was certainly an expensive picture to make.

The story was taken from a novel by Rachel Field and was based on a true story. It begins with Bette Davis on her first day as a high school French teacher in 1850 New England. Several of her students have learned that she was formerly imprisoned in France. Davis then tells her story to her class and we flash back in time several years.

Henriette Deluzy-Desportes (Davis) gets hired as governess to the wealthy French Duc de Praslin (Boyer) and his four children. His wife, the Duchesse de Praslin, is a completely selfish, neurotic and jealous woman with absolutely no affection for her children. From the moment she appears on the screen she is clearly the villain of the piece. She is played to the hilt by Barbara O’Neil, best remembered as Scarlet O’Hara’s mother.

Davis didn’t like to work with equally iconic male stars. With few exceptions, her pictures were Bette Davis vehicles from start to finish. Here, though, she shares the screen for the one and only time with Charles Boyer. He holds his own with Davis and in fact has the scene with the biggest emotional impact. Two thirds of the way in the story swerves in an unexpectedly dark direction. I won’t give the ending away.

The sets are gorgeous and expensively shot, the script is filled with high drama and romantic dialogue and Bette Davis and Charles Boyer remind modern audiences what Stars used to look like. On the downside the movie runs well over two hours and the relationship between the two main characters is represented in such a pure and sanitized manner that it is rendered almost unbelievable. But somehow these two formidable actors pull it off.