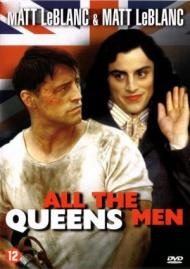 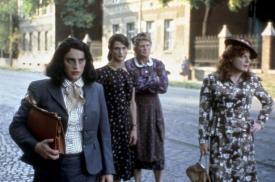 Like several other movies in recent years, All the Queen's Men deals with the World War II German decoding machine, the Enigma. This time around, in order to obtain one of these machines, four soldiers are sent to steal one of the machines directly from the factory where they are made. The catch is that, due to the shortage of German soldiers, the factory is manned entirely by women, so all of the men sent on the mission must go in drag.

The two stars of the movie are Matt LeBlanc of Friends fame as the tough guy with a track record of failed missions, and the genius British Stand-Up comic; Eddie Izzard who plays the drag queen who must train the motley crew sent on this mission how to dress and act like women. Of the two, Izzard gets all the best lines and seems to be one of the only actors in the movie who can move confidently between the drama and the comedy, most of the others, including LeBlanc, who in a desperate bid to escape his Joey character, plays it extremely straight, seem either stuck in the comedy or the drama. Izzard's gay night club performer nearly deserves a movie of his own. His past is touched upon since it affects the plot and makes him the most interesting character. He used to live in Berlin during the early 1930's, when it was at its most decadent and you could easily imagine him performing at the Kit Kat Club alongside Sally Bowles. He even gets to perform a brief Marlene Dietrich impersonation near the beginning of the film. His ex-wife (she left him when she caught him having an affair with their driver) still performs in Berlin and this connection plays a big part in the movie's climax.

As you've probably guessed, most of the jokes revolve around the fact that men are dressed as women, including the predictable; a German soldier makes a pass at one of the 'women' and gets punched for his efforts. One of the German Generals has a thing for large, strong women so naturally he's attracted to the agents in disguise. You get the idea.

The drama, and for me this worked better than the comedy, comes in the form of the reality of war. The agents arrive in Berlin to find it bombed to Hell. Buildings lie in ruins while its citizens live amongst the ruins. As one of the agents in disguise learns, it's hard to think of all Germans as faceless Nazi bastards when you live among them or have to kill one of them up close. The danger of living openly gay under the Nazi's is also touched briefly upon.

On a quick note of historical accuracy, the movie takes place in 1944. We know now that the Allies already had an Enigma machine for several years by that time. In case this annoys you while watching the movie, you should know that the true purpose of their mission is explained at the end of the film and is completely consistent with actual events. And this movie is purported to be based on the actual exploits of the so-called 'Poof Brigades'.

The makers of this movie had a choice when they made it. They could have gone all out for laughs and hammed and camped it up, or they could have gone for an action/dramatic war picture. Instead, they tried to do both, and the movie suffers for it. 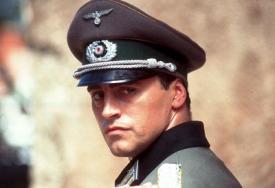 Matt LeBlanc in All the Queen's Men.

All The Queen's Men is just more proof that none of the cast members of Friends have what it takes to be lead actors or actresses in a movie. Why does anyone keep hiring these people for starring roles in films? Of the guys from Friends, Leblanc fairs the best, but that's really not much of a compliment considering how dull they each are in absolutely anything outside their television show.

It is not entirely Leblanc's fault that his work here is dull. Sure, he adds nothing to his character, but the writers drop the ball as well. Leblanc plays the stereotypical tough guy. He is supposedly the muscle and experience in the group. He makes all the mistakes. He nearly gets caught and shot at. He leaves the note that almost sabotages the mission. Worst of all though, is the convoluted romance he has with a German girl who helps them. They know each other for 2 days and are willing to sacrifice themselves to save each other.

As Scott wrote "...it can't decide what it wants to be..." So what it ends up being is ineffective. It should have dropped the entire part about Leblanc's character and gone with Eddie Izzard's character. At least that could have had some serious drama and emotion. His is a character that has a past just waiting to be explored. The director did not have a concise vision of where he wanted to go with this movie. If he claims he did then he is just simply a lousy director. 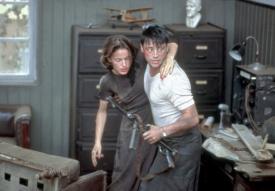 Nicolette Krebitz and Matt LeBlanc in All the Queen's Men.

There was a time back in the fifties and sixties when lighthearted romantic war movies were popular. They were always set during the second world war. Cary Grant and Leslie Caron falling in love in Father Goose leaps immediately to mind as does The Sound of Music. These movies were waxing nostalgic by treating war with a relatively light touch. They did all manage to have at least one great scene or moment of tension where the realities of war intrude on the characters but at the same time you knew things would never get too real. All the Queen's Men fits into this category of movie. Therefore, unlike my brothers, I had no problem with the movie's mix of humor and drama. I saw it as simply an homage to a more innocent era.

I also have to disagree with my brothers about Matt LeBlanc. I found him well-suited to the role and thought he did a decent job. Perhaps because I have never been a fan of Friends I am better able to accept him in a different role. At any rate I found him to possess many of the qualities of the great leading men of the past. He is photogenic, knows how to deliver a line or do a double-take, and can even handle the serious moments with aplomb.

I enjoyed Eddie Izzard's character as well, especially his rendition of 'Falling in Love Again'. Likewise I got caught up in the relationship between the old guy and the little girl. In this type of movie it doesn't matter that none of the four men do a very realistic job of passing as women. That's not the point.

This is the type of movie that doesn't ask much from the viewer. I enjoyed it as an old-fashioned Hollwood movie with a modern sensibility. I recommend this movie as not a bad way to wile away a rainy Sunday afternoon. You may not remember much of it very long after the credits, but it is pleasant enough while it lasts.