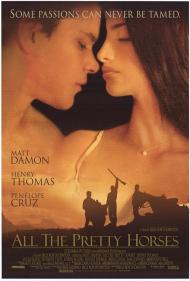 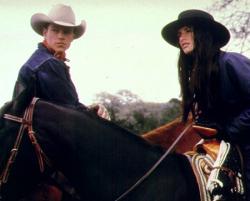 Matt Damon and Penelope Cruz in All the Pretty Horses.

Although All the Pretty Horses comes in at just under 2 hours, it felt more like 3. Billy Bob Thornton directs this love story that desperately needed to be trimmed down. He shows us plenty of landscape shots and occasionally gives us closeups of people's eyes. The cinematography looks nice but does not advance the plot, and I have no idea what he thought he was doing with the extreme closeups.

John and Lacey are two Texas cowboys in the late 1940's. They saddle up and decide to head south into Mexico. The movie never gives a decent reason why. They soon meet up with a teenager, Blevins, on a stolen horse. They make Mexico and Blevins loses his horse after a thunderstorm. They find it in someone's coral and he steals it back. The three are now pursued by locals and they separate.

John and Lacey eventually find themselves on a huge ranch, where they get jobs breaking wild horses. John falls in love with the ranch owners daughter, Luisa, whose Aunt does not want their relationship to go anywhere. They ignore the Aunt's warning and do the deed, several times. Anyone with half working eyes can tell this is a relationship that is doomed from any number of angles. First there is the fact that Luisa's Dad is rich. He has a plane and flies her all over the world. There is no way in hell that she would end up with a drifter. Call me unromantic, but the Paris Hilton's of the world do not go around marrying bums. Second, he is a gringo that her family would never accept as anything more than a hired hand.

The local police show up and arrest John and Lacey for stealing a horse. They are thrown into jail and reunited with Blevins. Things get real ugly for these guys and a particular segment will likely throw you for a few seconds. I won't go into it as you have to watch it to experience it. Either way, they get out of jail and, the hard headed, John heads back to the ranch.

The first and foremost problem with All the Pretty Horses is that none of the main characters act as if they have any sense whatsoever. John and Lacey go to a foreign country for no discernable reason. Blevins breaks all kinds of laws while in a foreign country. John ignores the Aunt's threats. The characters in this movie mistake stupidity for bravado. Even when given a second chance, John has not learned a thing.

The cast is competent. Damon and Thomas do decent accents. Black worked with Thornton on Slingblade and he is good in any role where his character is a Texan. His accent could not be more distinct. Speaking of Thornton, he is a much better actor than director. A better director and editor could have improved this movie 10 fold.