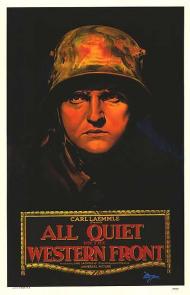 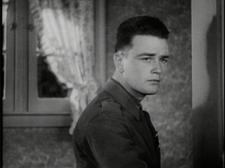 Lew Ayres, discovering that home is not what it used to be.

All Quiet on the Western Front is one of the greatest war movies ever made! It is filled with memorable scenes that will stay with you long after turning the DVD player off. It was only the third film to win an Academy Award for Best Picture and it deserved it. Some 15 years later, Hollywood would make dozens of war movies but few were as realistic as this one.

The movie opens as a bunch of German highschool boys are getting a lecture from the teacher on the glory and greatness of fighting for your country. Behind the teacher a parade of soldiers are walking by in the streets. In the moment of excitement they all run out and sign up. The scene is a piece of pure propaganda. It shows how patriotism can be manufactured and washed into someone's brain. It ignores the fact that some men actually want to go and do have a genuine sense of patriotism and duty.

The boys go to boot camp and then off to the trench warfare of World War I. The boys start dying off and getting wounded at a regular pace. A nice pair of boots gets passed around as one of them dies someone else takes and wears them.

In between fighting, the men occasionally stop to discuss the war and the politics of it. They are all very naive to it. None even know how the war started. One experienced soldier suggests, “At the next war let all the Kaisers, presidents and generals and diplomats go into a big field and fight it out first among themselves. That will satisfy us and keep us at home.” This movie is very anti-war.

The greatness of All Quiet on the Western Front is in the amazing direction. One of the most heartfelt scenes is when Paul is trapped in a fox hole in the middle of no-mans land. A British soldier jumps in and Paul ends up stabbing him. The man slowly dies as Paul watches him. He later takes out the man's wallet and finds a photo of his wife and daughter. It is an amazingly personal moment in the middle of a large battle.

Lately the news has been reporting on how tough it is for soldiers to reacquaint themselves with their families and life away from the war zone. This movie discusses that in wonderful detail. The most famous scene though, is the final one when Paul reaches for the butterfly. It is symbolic, poignant and of course sad.

One segment that surprised me a bit was when some of the men go skinny dipping to bathe. Three girls walk by and the men flirt with them. The men each dive under water and their is a flash of rear ends. The girls ignore the guys attempt to get their attention until one of the men shows them food. The men later go to the girls house and exchange the food for sex. I guess quick nudity and a sexual rendevous was okay before the Hays office brought in it's moral code

The acting is a bit melodrmatic, but it was the style of the day. Get over that and you will find a movie that approaches war like none that has ever been made since. Saving Private Ryan is a great war movie but it has too many overly dramatic scenes, like Tom Hanks shooting the tank at the end. All Quiet on the Western Front never goes over the top. It just drags you through the mud and leaves you thinking. 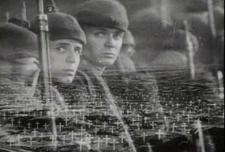 The best job Hollywood has ever done of showing that War is Hell.

The patriotism, Eric, is real enough. All of the boys who enlist at the beginning have it. That is why they join up; to fight for their country. What makes that scene propaganda is that the teacher convinces them that war is a clean and noble thing and that they will all come back as heroes and no one will die, and they all believe him.

So the fact that war is hell is a liberal message Eric? I'd say it's a common sense one. Even the rare times when war is necessary doesn't make the fact that for the common foot soldier, never-more-so than during World War I, death is likely and that it's a dirty, messy business. One of my favorite scenes in the movie is when Paul is back home on leave in the bar with his father and some of his father's old friends. They calmly discuss the direction they think the war should take without ever taking into account that what they are talking about is unrealistic and would cost thousands of lives, but not theirs of course.

Your comment regarding the Hayes Code is completely true Eric. Not only does this movie have a brief shot of some of the soldier's naked asses, it also deals with the men having sex with some French women in exchange for food. There are also scenes of graphic violence and death that would be unheard after the Hayes Office began censoring movies. It's funny how as Americans we've always prided ourselves on freedom of expression and anti-censorism, when for years and years we allowed our movies to be censored, and no, I don't think that's too strong a word. It would be some 20 to 30 years before Hollywood would start to get back the freedoms it lost in the 1930s and not until the late 1960s, early 1970s that Hollywood regained the claws that the Hayes Office had clipped.

Most movies from the 1920s and 1930s seem dated, but apart from the acting style Eric mentioned, this movie isn't dated at all. The production values are incredibly high and not just for the time. And as the movie has aged and the film has gone grainier and the flickers increased, it almost adds to the effect. It really felt while watching large portions of this movie that you were witnessing scenes from World War I.

If I was looking for anything to complain about, and I'm really not, I might say that Law Ayres isn't the world's best actor and that the friends he enlists with don't really have distinguishing personalities, but that's just nitpicking and this great, great movie doesn't deserve that.

Eric, you aren't kidding when you say this movie drags you through the mud. By the end of it you really feel as if these characters have been dragged through hell. 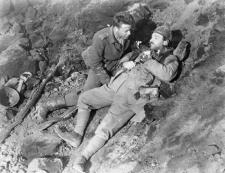 A powerful moment that brings combat up close and personal.

The Big Parade (1925) and Wings (1927) had both been hugely successful silent movies about the first world war, becoming respectively, the biggest box office hit of the 1920’s and the winner of the very first Best Picture Oscar. What made Western Front so groundbreaking at the time, besides its unsparing view of war, was that it was a talking war picture. Remember this was less than 3 years after Al Jolson warbled out a couple of songs and lines of dialogue in The Jazz Singer. Hollywood had been revolutionized nearly overnight, but one thing that happened when the sound stages went up was that the movies became much less mobile. If you watch some very early talkies you can see how the staging and action was sacrificed so that the actors could talk into the not-so-well hidden microphones. All Quiet on the Western Front helped lead the way into a new era of outdoor sound moviemaking.

And speaking of the sound. This is one loud war movie. There are scene after scene of battles with incessant bombing sounds, explosions, gunfire, bodies falling over barbed wire or into mud filled trenches. As my brothers have both already noted, this movie brilliantly drags you through the front lines without the obvious graphic violence of later war movies. The claustrophobic scene with the soldiers hiding in the bunker while bombs explode all around is absolutely masterful. It brings you into the scene and will make you wonder how you would behave in that situation. Would you become lethargic and resigned and silently stare into space? Would you go hysterical and try to claw your way out? Or would you become callously cool and play cards?

All Quiet on the Western Front is one of the greatest movies ever made and nearly 80 years, and countless wars later, it remains the definitive study of the Hell that is War. 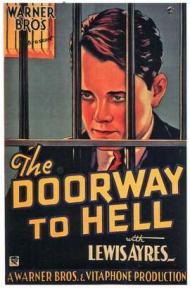