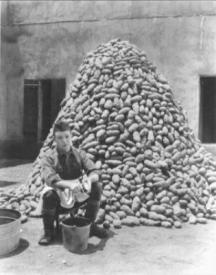 Harry Langdon is the forgotten silent movie clown. For a few short years in the mid 1920’s he was nearly as popular as Chaplin, Keaton and Lloyd. Today he is remembered only by fans of silent comedy. All Night Long is a two-reel short from producer Mack Sennett made in 1924 just as Langdon’s fame was growing. It was written by future director Frank Capra. Like Buster Keaton, Harry Langdon was a veteran of vaudeville. He was 40 years old when he entered the movies.

Frank Capra said in an interview that the reason Langdon didn’t have staying power was because, unlike the other three silent era comic giants, he (Langdon) didn’t create his own character. Capra and writer Arthur Ripley came up with his baby-faced man/boy persona whose shtick was being completely guileless and slow on the uptake. Langdon didn’t fully understand his screen character and when his ego grew too large (he would later fire Capra as his writer/director) his pictures suffered. By the time the movies learned to talk Harry Langdon was a washed-up has-been.

The movie begins with Harry waking up in an empty movie theater. He gets caught in the middle of a robbery. He recognizes one of the burglars as his old sergeant from the war in France. In 1924 this was probably a rather common occurrence, two men who had fought in the war together inexplicably meeting up.

The two men begin to reminisce and we cut to a flashback of Langdon as a doughboy peeling potatoes. The sergeant reluctantly invites him to dinner at his French girlfriend’s house. Upon seeing Harry the girl instantly embraces him with a passionate kiss. She is very French. Langdon falls backwards out of an open window and then begins staggering about in slow motion. He quickly falls for Nanette, the very French girl, and finds himself competing with his sergeant. Dinner is suddenly interrupted by an air raid and Nanette winds up in Harry’s arms. The sergeant chases him outside.

Next the two men talk about the front lines. Harry and the sergeant are in the trenches. What follows is a series of not very funny slapstick bits. Harry inadvertently rescues a Colonel and gets promoted to Lieutenant; whereupon he returns to Nanette’s farmhouse. Cut back to the theater where the sergeant tells Harry, “You got the girl and I got the guard house.” They begin to fight and dynamite explodes. The final scene is Harry and the sergeant, covered in bandages, being pushed in an oversized baby carriage by Nanette, now Harry’s wife. They are accompanied by their three children. A parade of veterans goes by and the men salute.

Harry Langdon died from a cerebral hemorrhage at the age of 60 in 1944. The all but forgotten star was still toiling in cheap two reel shorts at the time of his death. 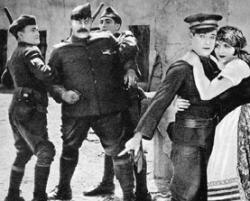 While there is a great deal of evidence that shows Harry Langdon was a popular performer in the mid-1920s, it seems unfair to place him alongside Lloyd, Keaton or Chaplin. The three silent comedy kings began their careers under the tutelage of others, but found even greater success once they took over their own careers. Langdon, on the other hand, crashed and burned almost immediately upon taking complete creative control of his character. As a performer you might argue he was the equal of the others, but he was no auteur as they were.

Langdon's most successful films, of which All Night Long is one, were made for Mack Sennett Studios. As Patrick wrote, it was there that Langdon transformed his stage character to the silver screen with the help of director Harry Edwards and writers Frank Capra and Arthur Ripley. For the few years he worked there, he was one of the most popular screen comics around, but he couldn't sustain his stardom for long.

This is an amusing little short. Langdon's innocent, childlike character finds himself in situations over his head, but he bumbles through them with dumb luck, always turning up on top despite himself. The battle scenes provide some of the biggest laughs and are the film's most inventive moments, such as when Langdon is perched atop the telegraph pole that gets destroyed piece by piece below him. I also laughed at the dinner scene where the father falls asleep and everyone else thinks that he's praying and so bows their heads with him.

All Night Long is a funny enough short. It's a slice of life and with its tales of the Great War, must have resonated with audiences of the day. To spend too much time comparing it to the work of Chaplin, Keaton, or Lloyd is time wasted. If you just enjoy it for itself it's still fairly entertaining. There's just not all that much to analyze about it. 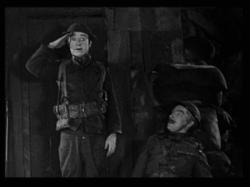 Harry Langdon and Vernon Dent in All Night Long

On this site, as well as on others, it has been discussed how Harry Langdon is considered the number four silent film comedian after Chaplin, Keaton and Lloyd. I have only seen a couple of Langdon's films but I disagree with that statement. At best he is number five. I believe Fatty Arbuckle belongs above him in every way. Worth noting is that all five of their careers can be traced back to Mack Sennett. Keaton's by way of Arbuckle.

I believe Langdon is not as well remembered today as the others because he was a one trick pony. Chaplin often dressed as the Tramp. Lloyd always wore his glasses and Keaton was famous for his stone face. Those were their staple traits and gimmicks but they did not confine them. They expanded on those personas often and were able to play a surprisingly different amount of roles, while retaining their signature star quality. Every generation since has found some audience that connects to Chaplin's down on his luck bum, Lloyd's every man or Keaton's innovation.

Patrick wrote how Frank Capra thought Langdon did not last as long as the others because Langdon did not create his man/boy film character. I think Langdon's man/boy persona was in itself the problem, no matter who or how it was created. It was far too limiting, and also a little weird. In his films, he approached every situation as if he were a little boy. His placing of his fingers to his mouth and mugging to the camera when nervous, looks more odd than funny.

Like Scott, I found the scenes taking place during the war to be the best. They have the most "action" in the film. When peeling the potatoes, Langdon looks like a punished little boy. When trying to eat dinner, he looks like an impatient child. etc... The routine got old very quickly. I was a bit uncomfortable when the girl flirts with and kisses him quite aggressively. It was like she was molesting an under aged boy.

I recall Keaton once played a child in a short with Arbuckle. It worked as his character was actually intended to be young, and not some stunted adult.  All three greats played men who fell in love for perhaps the first time. All made films where their characters were in well over their heads. The difference was that they all got themselves through it or at least moved on. Langdon's man/boy seemed to get by with only some coy mugging and, as Scott wrote, dumb luck. I found his routine to be as annoying as it was funny.