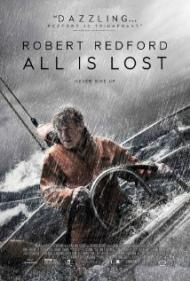 Robert Redford in All Is Lost.

All Is Lost is a tale of the basic human struggle to survive against the elements. Robert Redford plays the unnamed protagonist, a man on a solo voyage in the Indian Ocean. He awakens to discover his yacht has struck a floating shipping container and is taking on water. For the next 90 minutes we watch as this man goes methodically about the process of survival. With his navigation equipment and radio out of commission he is on his own. At first he seems unfazed as he goes about doing such mundane tasks as patching the hull of his boat and filling a large container with fresh water. But then a tempest hits and things turn even more dire.

Robert Redford, despite his weather-beaten skin, is still a strikingly handsome man. At 77 he remains quite physically fit as he demonstrates here. He did most of his own stunts. That's really him at the top of the yacht's mast in one scene (see photo), and he is in nearly constant motion throughout the movie. Without resorting to over the top histrionics he is compelling to watch. He says more with just a grimace or a sideways glance than some actors can with a page of dialogue.

The beauty of this poetic film (with a haunting score by Alex Ebert) is that Redford is the only actor in sight and he speaks just a handful of lines. The theme of one man alone at sea has been done before, most notably in Life of Pi and Castaway. The big difference is the level of reality and naturalism that is achieved here. If it weren't for the fact that Redford is such an iconic actor, All Is Lost could almost be a documentary -if you imagine that someone could be aboard the ship filming his struggle to survive. There are no false dramatics, merely one man's struggle to stay alive and find rescue.

The ending is brilliant. Without giving it away I'll just say that it completely satisfies, and although I'm pretty sure what the denouement is intended to be, director/writer J. C. Chandor (Margin Call) wisely leaves the door open to interpretation. All Is Lost offers a new take on the old story of an old man and the sea. Robert Redford gives one of the most impressive performances in his half a century career as a movie star. Don't miss it. 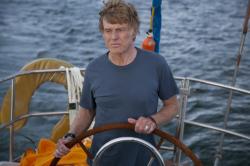 Robert Redrod in All is Lost.

Writer and director, J.C. Chandor's first film was 2011's Margin Call, for which he received a Best Original Screenplay Oscar nomination. That dialogue heavy film, with its large cast, set in one of the most densely populated cities on Earth, is the polar opposite of this, his sophomore effort. It features a single actor, is set entirely at sea, and the script with its scant dialogue, was just 31 pages long. The things the two films have in common are terrific acting and the fact that they are both very compelling.

It's Robert Redford's performance that is getting most of the attention and for good reason. The seasoned old pro turns in a very subtle, nuanced performance that will undoubtedly earn him plenty of attention come award's season. As Patrick wrote, he shows a physical ability at the age of 77 that should be the envy of men years younger than he. He says very little with his voice, but plenty with his eyes, his face and his body. Again as Patrick wrote, there are no false dramatics. Redford remains outwardly calm throughout, from the opening scene when he awakes to disaster, right up until the film's climax, with just one scene where he lets his emotions overcome him in a vocal outburst.

Even with just one set and one actor, the film remains tense and exciting. It will have you on the edge of your seat and holding your breath. Even the quiet moments are filled with tension in anticipation of the next, inevitable disaster to come. There are several scenes that generate real fear. The most prominent being when the boat is flipped over during a storm and for one paralyzing moment Redford stares down through the glass skylight into the ocean depths, before the boat is righted once again.

Patrick referred to the ambiguous ending. Both Redford and Chandor have said in interviews that it's up to the viewer to decide whether or not it's an optimistic or pessimistic ending. As with Patrick though, to my mind there's only one ending that fits the tone of the film and the brief opening voiceover.

There have been other films and books along similar lines to this one. Even this year's Gravity bears a strong resemblance to it. However, rarely has it ever been done so well. 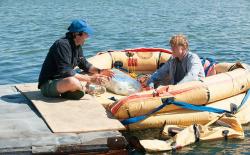 J. C. Chandor directing Robert Redford in All is Lost

Yes, it is nice to watch a seasoned pro practice his craft. The minimalist plot and setting is unique to most films, if not entirely original. Without dialogue, it is up to Redford and Chandor to keep us interested. Both succeed, for the most part.

A story like this is clearly one about symbolism. It obviously shows man alone struggling to survive. Yeah, this is all high school stuff we discussed when reading Ernest Hemingway’s “The Old Man and the Sea.”

Life seems easy going until some coincidence comes out of nowhere and forces us out of our comfort. In the entire vast Indian Ocean, this guy happens to be asleep while his boat hits an object floating in the same area. What are the odds? The best piece of symbolism is when he is in the tiny dingy waving frantically and screaming, “Help.” To the passing cargo ship with the corporate logo painted all over it.

We learn nothing about this guy except that he must like solitude. For whatever reason, he took this trip alone. Has he just retired? Did his wife recently die? Is this a trip he has dreamed his whole life about? We never find out and for me, the film suffers for it.

Without this man becoming personal to us this movie sometimes seems like a travelogue on how to survive at sea. There could have been some family photos onboard that told a story. We could have seen a flashback or two. Chandor chose not to do either. This leaves us with a random old man surviving alone in a world that does not seem to even know that he is there. I wanted him to survive as he is the only person on screen, but I had no real emotional investment in it.