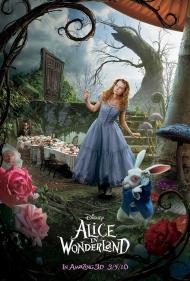 Helena Bonham Carter as the Red Queen in Alice in Wonderland.

Although I started reading Alice in Wonderland several times as a child I never finished it. Likewise, I've never seen the Walt Disney cartoon version of it all the way through either. Despite that I, like most people, am familiar with the iconic imagery from the story. The tardy white rabbit with the pocket watch, the pissed off red queen with the beheading fetish, the sanity challenged Hatter, the rotound Twiddle-dee brothers and the disappearing Cheshire cat with the egnimatic smile are universally known characters. Therefore I was more than prepared to see this Tim Burton sequel to the classic tale.

The story opens briefly with Alice as a young girl complaining of a recurring nightmare that is obviously referring to Wonderland. We then jump into the future with Alice now nineteen and about to become engaged to an obnoxious Lord. Alice believes that her visit to Wonderland was just a dream, but that all changes when she once again finds herself down the rabbit hole and deep into a combination of Wonderland and Tim Burton's imagination.

In the years since Alice's last visit the Red Queen of Hearts has taken over Wonderland with the help of the dragon-like Jabberwocky. An alliance of the good characters of Wonderland have lured Alice back to help them overthrow her and put the White Queen back in power.

As you'd expect from a Tim Burton film the visuals in the story are distinctive and artistic. The setting suits his wacked out sensibilities perfectly. Almost anything can happen in Wonderland and Burton's imagination is particularly suited to bringing the surrealism of the story to life. The digital 3D enhances the imagery even more.

Without a good cast though all the visuals would just be pretty pictures. Apart from Mia Wasikowska as Alice, every other speaking part is played by someone famous. Not that Mia doesn't hold her own, because she does. A feat made even more impressive because the rest of the cast is so famous. Burton mainstays Johnny Depp and Helena Bonham Carter are both featured with Helena stealing every scene she appears in as the large-headed Queen. Stephen Fry, Alan Rickman and other English Character actors play or voice the other odd denizens of Wonderland.

Although there are a few darkish moments in the story (such as Alice crossing the moat on the floating heads of the Red Queen's victims) this is still obviously a children's movie. The violence is fairly tame and played mostly for laughs. There's a moral to the story about following your own path. It's all fine and good, but as an adult with no children I would have preferred the film had it been a bit darker and twisted. It just all feels a bit too safe.

With his update of Willy Wonka and now Alice in Wonderland, Burton is making a nice career for himself as a twisted children's filmmaker. A sort of fractured fairytale teller. It's a role that seems to suit him. 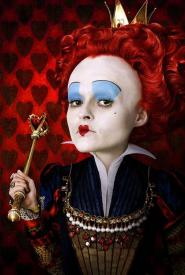 The setting definitely suits Burton's whacked out sensibilities. He is to film what Rene Magritte was to paintings.  Both were/are surrealists.  The paintings of Magritte are astonishing as they instantly cause a reaction in the observer.  They raise questions and then awe.  Burton's films likewise earn reactions.  You either love his work or hate it.  I am in the latter.  You spend a few moments absorbing Magritte's work and then move on.  Burton keeps throwing images at you until the plot becomes almost moot.

Carter hams it up in an over the top role.  She gained fame in buttoned up British dramas, but I like her best playing the larger than life bad girl, such as the slut in Fight Club and the witch in Harry Potter.  Her scream of, "Off with their heads!"  is the most memorable moment in the entire film.  She plays wicked very well.  "You're right, Stayne. It is far better to be feared than loved."

I never cared about anyone in this film.  The world is so fantastic that none of it seemed real enough to matter.  The only time I felt the tiniest bit of concern for anyone was when Alice returns to reality and turns down her boyfriends public proposal.  How embarrassing! 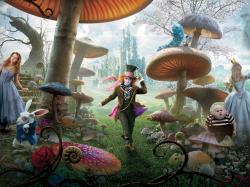 Like Scott I began reading the Alice books several times as a kid without ever finishing them. Unlike Scott, I recently bought an annotated copy of Alice in Wonderland and Through the Looking Glass and I am happy to report that after a mere 35 years I have finally finished reading them.

Lewis Carroll (aka Charles Dodgson) was as eccentric a talent as Tim Burton and on paper they seem like a magic combination. Unfortunately Burton, while capturing the more fantastic visual elements of the story (as usual), entirely misses the offbeat and very British sense of humor that permeates the books. And while the characters look like their written counterparts they don’t at all behave like them.

The worst offender is Depp’s Mad Hatter. By now his penchant for playing oddball characters has worn pretty thin. His Hatter lacks the charming combination of madness and whimsy that he exhibited in the books. And his eyes just look stupid.

Bonham Carter does steal the movie as the gloriously over-the-top Red Queen. She alone seems to have stepped right off the page (with a dash of Bette Davis as Queen Elizabeth I in The Private Lives of Elizabeth and Essex tossed in). I couldn’t agree more Eric, her shouts of, “Off with their heads!” are the movie’s most memorable moments and they perfectly capture the vicious humor of this classic children’s book.

The voice-over work and the CGI look of the strange menagerie of animals Alice meets are both spot on. Stephen Fry and Alan Rickman, as the grinning Cheshire Cat and hookah smoking Blue Caterpiller respectively, being the standouts in my mind. The problem is in what they are given to say. The script (the single most important ingredient) is the weakest part of the movie. The story is lazy and unoriginal.

Tweedledum and Tweedledee don’t look or act like in the book. They are wasted characters given no personality at all. Like Humpty Dumpty (who is nowhere to be seen) these twins were famous nursery rhyme characters long before Carroll put them in Wonderland.

The books are all about puns and playing with the English language. They also involve simple mathematics and in Through the Looking Glass Carroll plays a game of chess with his characters. There is never at any time a sense of real danger. Therefore the adventure aspect of the movie feels forced.

I didn’t like Burton’s remake of Willy Wonka, ditto his take on Alice in Wonderland.