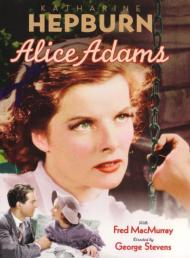 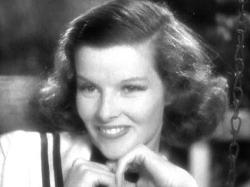 Taken from the Booth Tarkington novel, Alice Adams tells the story of a social climbing young woman and her attempts at fitting in with the wealthy citizens of her small town in nineteen-twenties America. Katharine Hepburn is luminous as the innocent title character, gushing out her lines while putting on a brave face to the world in order to deny her families' lack of money and social position. Then she meets and falls in love with the rich, handsome and understanding Arthur Russell (Fred MacMurray). At first she manages to hide the truth about her shabby home-life but eventually she must invite him to a family dinner that turns disastrous.

Katharine Hepburn brings so much to this role. There are several images in the movie that have become classic. Alice in last year's dress, clutching her corsage of wilted violets at a fancy ball and later, after the humiliating evening, she stands looking out her bedroom window sobbing as sheets of rain cascade down the pane. Yet Hepburn evokes Alice's pride and spirit as well. She makes Alice sympathetic but never pathetic.

Fred Stone plays Alice's rather easygoing father, Frank Albertson is her slacker brother Walter, and Ann Shoemaker plays her equally ambitious mother. Charley Grapewin (better known as Dorothy's Uncle Henry) has a few good scenes as Old Man Lamb, the owner of the drugstore where Alice's father and brother work as clerks. Hattie McDaniel has the funniest scene in the movie as the gum-chewing maid that Mrs. Adams hires to serve the gourmet meal they have prepared for Arthur's visit. Celebrated gossip columnist Hedda Hopper has a small part as a rich dowager.

Without the presence of Katharine Hepburn this movie would most likely have been long since forgotten. And although, at its best, Alice Adams provides only modest entertainment, it does give modern viewers a peek at a slice of homespun Americana that may or may not have existed outside of the movies. In a word: quaint. 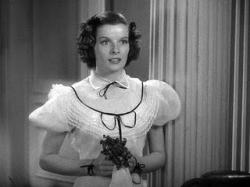 Katharine Hepburn does a terrific job as the title character. When the story begins she is positive and effusive, almost to the point of being annoying. She wants so desperately to fit in at the party that she's willing to ingratiate herself to whatever degree she must. It's not until she gets home and to her room, in the scene Patrick mentioned, that you see her facade crumble as she breaks down in tears and we realize that her sunny personality is at least partly an act.

The book upon which this movie is based has a different ending than the one in the final film. Reportedly director George Stevens and Katharine Hepburn wanted to end the movie as the book did, but the studio wanted a happier one. I have to say that the original ending would have been more fitting. The actual ending is a typical Hollywood romantic comedy ending, but in the book Alice becomes independent and ends up going to secretarial school. This is a better ending because for most of the movie Alice is a social climber,  obsessed with what people think of her and her family's social standing. By going to business school, something no respectable debutante would do, she shows that she no longer cares what the other girls in town think about her. It completes her story arc much more than simply falling in love does.

I heartily agree with Patrick that Hattie McDaniel provides some of the movie's biggest laughs. She's only in one scene, where she serves dinner, but she makes the most of it. She doesn't even have that many lines, but she doesn't need them to be funny. She says more with just a look and a sneer than pages of dialogue could ever do.

This is Katharine Hepburn's movie and she's the reason why it's remembered. The plot is pure melodrama, but her performance is nuanced. She keeps her smile firmly in place, but the eyes reveal everything she's feeling. In the scene right after the family dinner, her performance is heartbreaking. She was nominated for the Best Actress Oscar, but lost out to Bette Davis. According to several interviews, Davis reportedly said that even she thought Hepburn should have taken home the prize that night.

The plot may be quaint, but Hepburn's performance is timeless. 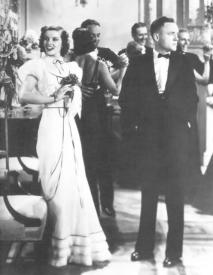 Katharine Hepburn is amazing as Alice Adams, playing against type.  Hepburn was known for playing very self assured and strong willed women.  Alice is extremely insecure.  Hepburn never cared for convention.  She wore pants before it became common for women to do so.  The one time she appeared at the Academy Awards she did not put on a gown but wore what she would wear around her house.   Alice is a girl very self conscious about her appearance and is bothered to have to wear a two year old dress to the party.

Patrick wrote that this is a, "...slice of homespun Americana that may or may not have existed outside of the movies."  What makes this film great and Alice so relatable is that she most definitely existed and continues to exist in everyone.  We all, at one time or another have felt insecure about ourselves.  Alice just wants to belong to a crowd that she has deemed superior to herself.  Patrick, did you not see some similarities in Alice's and Walter's humble beginnings and ours?

Alice's low self esteem is accentuated by her brother Walter.  He does not care what others think of him, and merely goes about having a good time.  When at the party, Alice is embarrassed when he greets the black band leader he has met before.  He clearly must go to clubs.  Walter likes to gamble and dresses like he has an interesting social life.  He knows how to work that fedora, cocked to one side.   He is the only one to tell Alice the blunt truth,  which annoys their mother, but as Walter says, "I am her brother ain't I!"

What I also find interesting is that Alice's bitchy mother constantly goes on about how poor they are and how bad their house is.  "Just look at the other girl's house, then look at our house." she complains to her husband.  In fact, their house is very nice.  It has a beautiful front door entry way, with stained glass windows.  It has more than one bathroom, including one for the master bedroom.  It has several fireplaces.  There is a front and a back stair case to go upstairs.  The front porch has a swing and a round stained glass window.   I thought their house was beautifully old fashioned.

Patrick and Scott wrote that Hattie McDaniel provides the most laughs and I agree.  I also found it funny when Alice's mother tells her husband that McDaniel has fallen down the back stairs and he says, "Did she break any of my things?"  He never thinks to ask, "Is she alright?"

The message of Alice Adams is to just be yourself and be proud of who you are.  Not only is Alice insecure but Arthur is ashamed to admit to his family that he is dating her.   Both of their issues would slip away if they would just learn to be honest and forthright.

I agree Scott, that Hepburn's performance is timeless, but so is this film's message. 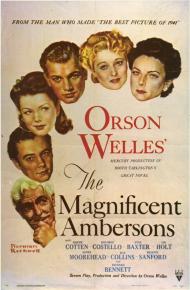