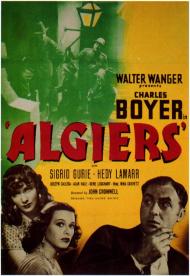 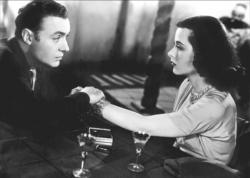 Algiers is remembered today because of its influences on Casablanca, which it predates by 4 years. In 1938 it was a big success, garnering several Oscar nominations including cinematography and one for its leading man Charles Boyer. Casablanca may have borrowed a few things from Algiers but everything it took it did better.

In the town of Algiers lies a ghetto known as the Casbah. Here hides Pepe Le Moko, famous Parisian thief, on the lamb from the French police for 2 years. Pepe's prison is a densely populated neighborhood made up of intricate and narrow alleys, built on many levels, with a maze of stairways and rooftop terraces. Here Pepe is a beloved and admired figure. Only he can't leave without risking immediate arrest. The characters populating the Casbah could all be found at Rick's Café, although some of them would be more at home at the Blue Parrot.

The police try to catch Pepe while he woos sophisticated gold-digger Gaby, played by the luminous Hedy Lamarr. Their close-ups, smoking and drinking together, are the best in the movie. They have scintillating chemistry lounging around the shadowy Casbah together and are both gorgeous and gorgeously photographed. This movie has plenty of atmosphere. In every scene Gaby drips with diamonds and pearls and to Pepe she smells like Paris in the spring. Whenever they get together they go on and on about Paris. Sound familiar?

In these scenes the romance part of the movie works. Unfortunately there is another woman in the picture and she has more screen time than Hedy. She's Ines, the gypsy Casbah girl Pepe has been sleeping with. She plays a pivotal part in the plot but is a rather annoying character. Or maybe I just don't like her because of the ending.

The intrigue is not as seamlessly woven into the story here as in Casablanca. It veers into melodrama a few times and Charles Boyer sings an off key version of "Cest La Vie". But these are small complaints. On the plus side Alan Hale and Joseph Calleia both create interesting supporting characters. Hale is a philosophy and poetry spouting jewel merchant who fences stolen gems. Calleia plays Inspector Slimane a character that easily translates into Claude Rains' Captain Renault.

I kept waiting for Charles Boyer's most famous line of dialogue, "Come with me to the Casbah." Apparently he said it in the trailer but it wasn't used in the movie. Who knew?