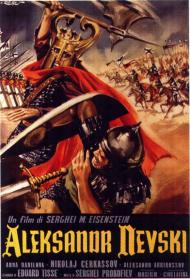 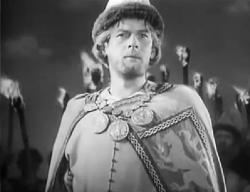 Alexander Nevsky was Russian filmmaker Sergei Eisenstein's first completed film in ten years as well as his first ever completed talking picture. He had begun and abandoned two other films during the 1930s before making this one. Using much obvious political symbolism of the day (keep your eye out for swastikas) Alexander Nevsky tells the story of the legendary Russian Prince who defeated Germany's Teutonic Knights at the invasion of Novgorod in 1242.

The movie was initially hailed as a masterpiece upon its release in December of 1938. But the winds of fate can change direction quickly and the following August, Stalin entered into the non-aggression pact with Hitler. The movie was immediately taken out of circulation. After all it depicts the Germans as so evil and vile that they are shown -literally- throwing naked babies into burning flames. But the wind changed direction again in June 1941 when Nazi Germany invaded Russia. Needless to say Alexander Nevsky was back and was once again hailed as a masterpiece.

The famous Russian actor Nikolai Cherkasov plays the title character. He stood six feet six inches tall and bore a striking resemblance to Gary Cooper (see photo). The script has him spouting propagandist dialogue like, “We have a saying: it's better to die for your country than to leave it.” and “I won't let those dogs set one foot on Russian soil!” There is a somewhat humorous subplot involving two soldiers who are both competing for the same woman. A woman who fights alongside the men. But this movie is really all about the battles.

It culminates in the famous Battle of the Ice. It was shot in summer so the landscape was altered to look wintry. They shot with a special filter, painted trees light blue and dusted them with chalk (remember this is a black & white movie). Sand was used as a stand in for snow on the distant horizon. The ice itself was made from asphalt and melted glass, which were designed to crack along pre-cut patterns.

This half hour battle scene is legendary. It has been copied many times since by everyone from David Lean (Doctor Zhivago) to John Millius (Conan the Barbarian) to Oliver Stone (Alexander). Millius even included a scene in Red Dawn where -after the Soviet invasion- Alexander Nevsky is playing at a theater. Musically, it features one of the most celebrated scores in movie history. Sergei Prokofiev composed the score which became so popular that he later turned it into a concert cantata. It has been called one of the best scores ever composed for the cinema with its flawless match of image and music. Woody Allen even borrowed the music to accompany a battle scene in Love and Death.

Today Alexander Nevsky is still regarded as a masterpiece but it succeeds more as a blatant example of cinematic propaganda than as movie entertainment.